Above: Signs from ResistJ20 Trump Inauguration protest by Megan Cloherty for WTOP.

People have noted that the last year has seen an escalation of protest activity in the United States. Many of these protests are generated by opposition to Donald Trump, e.g. protests against immigration policies, and many have partisan leanings, e.g. the Women’s March, the March for Science and others were brought on by events or circumstances, e.g. the March or Our Lives against gun violence. Protests began on the weekend of Donald Trump’s Inauguration, indeed there may have been more protesters at the inauguration than supporters of the president.

The Washington Post has conducted a poll that measures how widespread political action has been in the Trump era. The poll was conducted in the first two months of this year among a random telephone sample of 1,850 adults nationwide, including 832 who attended a protest or rally in the last two years. The Post reports, “Tens of millions of Americans have joined protests and rallies in the past two years, their activism often driven by admiration or outrage toward President Trump, according to a Washington Post-Kaiser Family Foundation poll . . .” 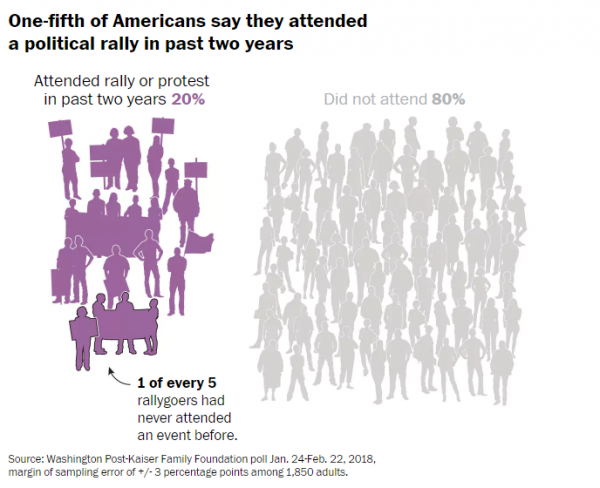 The poll found that 20 percent of people in the United States have participated in street protests or political rallies since 2016, writing “One in five Americans have protested in the streets or participated in political rallies since the beginning of 2016. Of those, 19 percent said they had never before joined a march or a political gathering.” The poll also found that 12 percent participated in an organized protest, march, or demonstration of any kind. This is an immense percentage of people in the US protesting the government.

The poll also found that 14 percent of people in the US “worked or volunteered for any group that tries to influence government policy on issues you care about, NOT including working for a political party or candidate.” Forty percent said “they contacted any elected official by phone, over the internet, by mail, or in person.” Fifty percent  said they “signed a petition, either on paper or over the internet, about a social or political issue.” Forty-one percent “bought or boycotted a certain product or service because of the social or political views of the company that provides it.”

We have made the point that political movements win when they represent the national political consensus and 3.5% of the public mobilizes to support that national consensus. It is hard to judge how these protests relate to the movement for economic, racial and environmental justice because many of those involved have protested because of Donald Trump. The Post reports, “According to the findings, 10 percent of all adults said they joined a rally or protest since the beginning of 2016 as a reaction to Trump. Six percent turned out to oppose Trump, and 4 percent did so to support him.”

The Post reports further on the Trump factor writing, “Half of those attending political gatherings were spurred to action at least partly by Trump. Many also turned out to express their views on a range of issues — most prominently women’s rights, the environment, immigration, LGBT rights, the Affordable Care Act, abortion, police shootings or gun laws.”

The Post quotes people who say they have lost faith in government — not just in the presidency but the Congress. One person they quote says:

“I never thought I was an activist — until now,” said Anna Bralove, 69. The day after Trump’s January 2017 inauguration, she joined the massive Women’s March in Washington, her first political gathering.

With a busy job training people on ever-changing computer systems, Bralove for decades never felt the need to spend precious free time protesting. But recently, she said, “I looked up and saw life wasn’t what we thought.” Now, she said, she has lost her trust in those in power, both in Congress and the White House.

However, she does say fear of Trump in the Oval Office is the driving force. 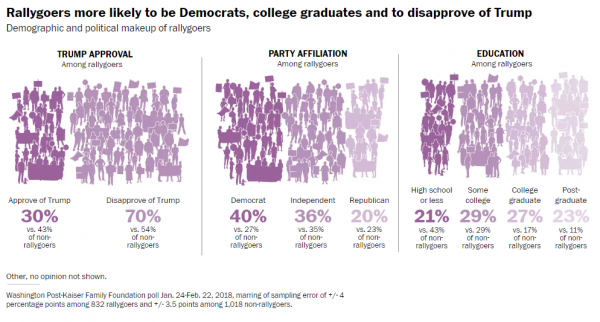 People are protesting on a variety of issues. 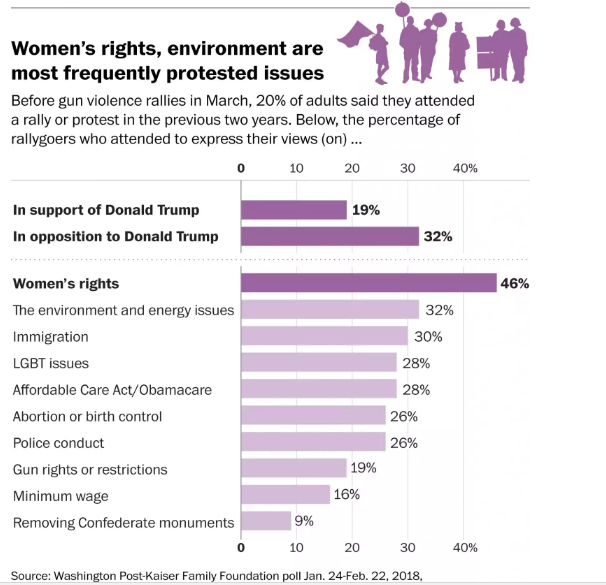 The long term impact of this new activism is hard to predict. The poll found that 38 percent of those who attended a rally plan to become more involved than usual in political causes while 58 percent plan to stay at about the same level of activism. Is this is a sign of major electoral change in 2018 and the Democrats take control of one of both chambers of Congress, will it lead to people feeling empowered? If a Democratic Congress fails to enact positive policies, will people become disenchanted or will they escalate? How much of this activism is due to Democratic Party organizing along with allied partisan organizations and will it continue when the Democrats are in office?

We saw mass antiwar protests during the era of George W. Bush, but when Barack Obama was elected president, after defeating Hillary Clinton in the primary in part due to his opposition to the Iraq War and her support for it, the antiwar protest movement subsided and is just beginning to recover now. At the same time, when President Obama was in office we saw the mass protest of the Occupy encampments, Black Lives Matter, Fight for $15 and against carbon energy infrastructure, among other issues. President Obama and the Democrats seemed to raise people’s hopes and then failed to deliver, leading to protests.

We have been predicting the 2020s will be an era of transformational change because crisis issues on multiple fronts will no longer be able to be ignored or mishandled and the protest movement is maturing, growing and becoming more effective. This poll provides further indications of those possibilities.

View the findings of the poll here.