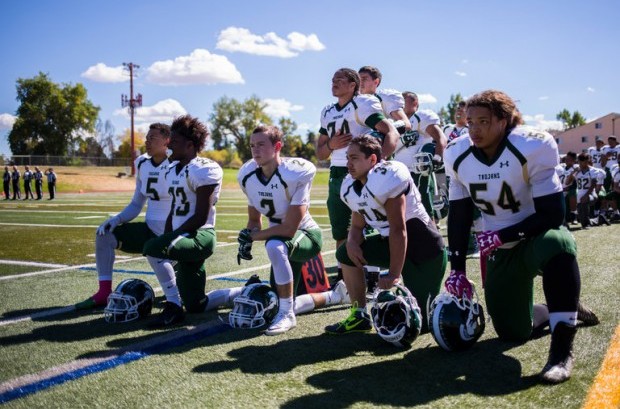 Above Photo: Aurora Central High School football players in Colorado went down on one knee in a sign of protest while the national anthem was being played before a game on Saturday. CreditNick Cote for The New York Times

AURORA, Colo. — Vicqari Horton dropped a knee to the grass. The varsity choir piped out “The Star-Spangled Banner.” And in the bleachers at a sun-soaked football stadium here on Saturday, parents clenched their teeth in anger or raised their fists in support.

“You can’t continue to slap people in the face and not expect them to stand up,” said Mr. Horton, a junior tight end at Aurora Central High School who is black and began kneeling during the national anthem at games in mid-September. “When Kaepernick kneeled, he gave us an outlet. He gave us something to do.”

In the weeks since Colin Kaepernick, a San Francisco 49ers quarterback, took a knee during the national anthem — a protest against racial injustice — he has been discussed by President Obama, has been derided by Donald J. Trump and has helped to intensify an already roiling national debate about race, the police and the definition of patriotism.

He has also pushed that conversation onto a quintessential American stage: the high school football field.

Over the weekend, three-quarters of the 44 Aurora Central Trojans football players knelt during “The Star-Spangled Banner” before the team crushed a rival, the Hinkley Thunderbirds, 41-6. A thousand miles away, students at Madison East and Madison West High Schools in Wisconsin dropped to their knees, too.

So have players at Garfield High School in Seattle; Castlemont High in Oakland, Calif.; Woodrow Wilson High in Camden, N.J.; and Mission High in San Francisco. At Omaha Central High, cheerleaders and band members have joined the protest. And in Beaumont, Tex., so have 11- and 12-year-olds from a youth team called the Beaumont Bulls. They have received a variety of responses: In the case of the Bulls, internet comments included a call for coaches to be lynched and the children to be killed.

Here in Aurora, a sprawling, highly diverse suburb of Denver, the protest has invigorated a group of young people who have never known a world without viral videos of violence.

They entered kindergarten about the time Facebook was born; were around the same age as Tamir Rice or Michael Brown, two African-Americans killed by police officers; and now attend one of the worst-performing schools in the state, a high school that is overwhelmingly black and Latino.

In interviews, several students took issue with critics who told them that they did not understand what they were protesting. “We know what we’re doing; we made a conscious decision,” said Jalil Grimes, 17, a senior and the team’s starting quarterback. “We see police do us wrong. We see our teachers give up on us and expect us to fail. We’ve always seen this. Once we saw somebody else stand up against it, we just fell in line.”

The idea of kneeling came from several players, including Mr. Horton, who approached their coaches to ask permission to do so. The coaches gave their support, and the school district issued a statement saying it would respect their actions. “Any time young kids can speak their minds, it’s always good,” said Tony Veasley, 49, a part-time coach for the Trojans who said six of his sons had graduated from Aurora Central.

On Saturday, though, the stadium was a sea of hearts tied up in internal conflict.

On the Hinkley side of the bleachers, near a mass of brass instruments and a cluster of exuberant cheerleaders — “Jam with us! Hey, hey!” — Melinda Holt, 60, a white Army veteran, sat with her husband, wearing Thunderbird blue. They were there to watch a grandson play, she said.

“It’s ignorance,” Ms. Holt said of the kneelers. “You are dishonoring our flag for the actions of a few. That’s like holding every black man or every white man accountable for what somebody else has done. And that’s wrong.”

On the other side of the stands, a Hispanic woman named Maria Mitchell — wearing Trojan green beside her daughter Téa — said she felt conflicted over the kneeling players. She spent more than 25 years as a military wife, she said, and believes that standing for the anthem is a way to honor lives lost in war.

But her children are of mixed ethnicity — black and Hispanic. “And if you’re not a person of color, you don’t understand any of it,” she said. “To wake up every day and not know whether your kids are coming home or not, just because of their color, is ridiculous.”

“Unless we walk in their shoes and feel what they feel on an everyday basis, we have no room to judge,” she continued. “We can choose to support, or not support and be blind.”

The protests come at a turbulent time for Aurora Central, a school of 2,172 students that is 67 percent Hispanic and 16 percent black. More than 40 percent of students are learning English as a second language, nearly 70 percent qualify for free or reduced-price lunches, and officials have announced a drastic academic overhaul intended to stave off a school shutdown.

Fights are a problem, and last year’s football game against Hinkley ended in a clash among students that forced the police to intervene.

Christian Wells, 17, an offensive and defensive lineman, ended that night in police custody, after officers confused him with someone else, he said. This year at the Hinkley game, he chose to go down on one knee.

“I’ve seen police brutality up close and personal,” he said. “To family members. To friends. To myself personally. It’s like, if nothing else will stop it, maybe silently protesting will do something.”

On Saturday, the Trojans finished the game in a cascade of cheers, bouncing out of the stadium and onto a yellow team bus. In the parking lot, a 13-year-old Trojan fan, Damian Chavez, called the decision to kneel a “sign of respect for every black person in the country.”

A few hundred feet away, inside the empty stadium, the 81-year-old press box manager, Bob Blair, dressed in cowboy boots and Wrangler slacks, looked out onto the field.

“They’ve never been anywhere to see what the rest of the world hasn’t got and what we have: It’s called freedom,” Mr. Blair said. “We don’t agree with it, but we can’t stop it.”