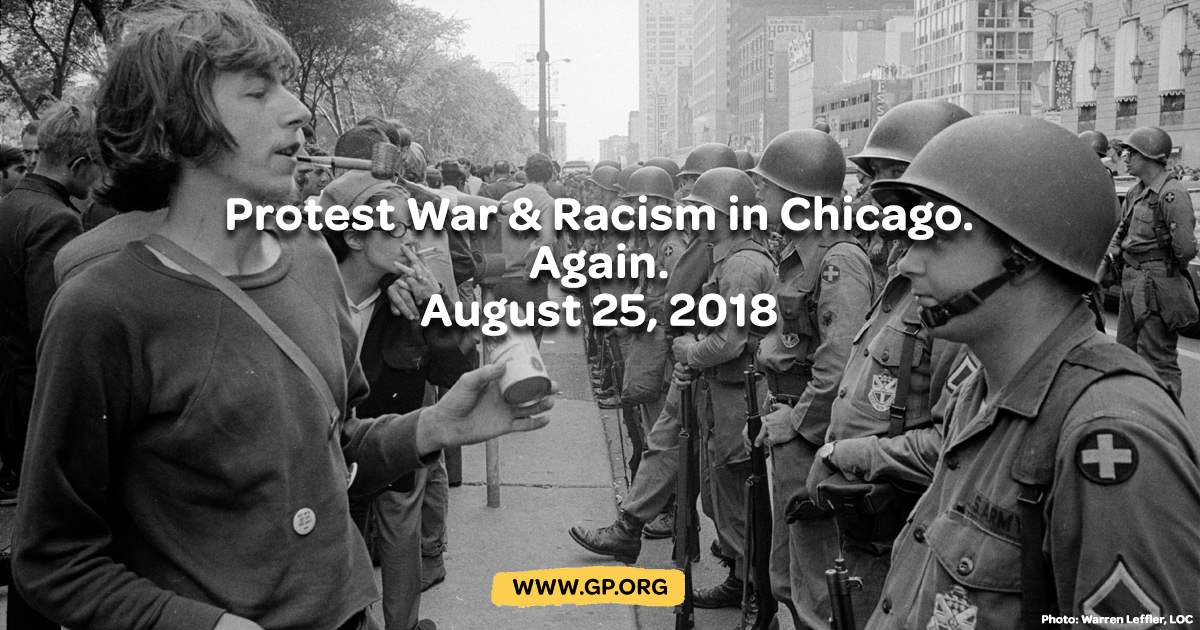 Protest War And Racism, In Chicago, On August 25th

Commemorate the 50th anniversary of the 1968 Democratic National Convention Protests

The following is the prepared text of remarks Rich Whitney made on behalf of the Chicago Committee Against War and Racism at a press conference on July 24th, 2018 in Grant Park in Chicago, near the statue of John A. Logan, General John Logan Statue in Grant Park, scene of one of the most iconic protests against the Vietnam War during the 1968 Democratic National Convention.

The CCAWR has issued a Call for a demonstration against war and police violence on August 25th, marking the 50th anniversary of the 1968 Democratic National Convention, when the movement against the Vietnam War was suppressed inside the convention hall, and brutally attacked by Mayor Richard Daley’s police on the streets of Chicago. If you can, won’t you please come to Chicago, and help change the world, on August 25th!

In calling for this demonstration, the Chicago Committee Against War and Racism declares that in many respects we are confronting worse evils today than we were 50 years ago — but we are still confronting the same institutional barriers to peace and progress.

Just 11 days ago, U.S.-led coalition warplanes in Syria conducted intensive airstrikes near Abu Kamal in the Deir ez-Zor province, with estimates of civilian casualties ranging from 30 to 54, the higher estimate coming from The Syrian Observatory for Human Rights. All too typically, this received little media attention. It was not part of the so-called “national conversation.” But acts like these, occurring on a regular basis, need to become part of the national conversation, and that is part of what motivates us to call for this protest. These acts of aggressive war are not somehow magically transformed into moral acts simply because relatively few U.S. personnel are at risk of harm.

In 1968, the U.S. government was engaged in one illegal war. Now the U.S. illegally bombs, drone-strikes and/or occupies territory in Afghanistan, Iraq, Libya, Syria, Somalia, Pakistan and Yemen. It is responsible for millions of casualties, horrific devastation and suffering, and the displacement of millions of refugees. It has also been financing covert destabilization, “regime change” and support for repressive governments in much of Central and South America –and then it cruelly imprisons and punishes the hundreds of thousands of refugees who come to this country seeking safety and the opportunity to work. It spends $10.3 million a day of our tax dollars in military support for the repressive, now officially apartheid regime in Israel.

Let us be clear. These wars are not only thoroughly immoral and illegal in their direct impacts, they are also part of a war at home against the American working class, and especially its most oppressed members, people of color. We spend over $1.3 trillion a year on wars and maintaining a military machine, including about 1,000 military bases in about 135 different countries — while working people and students are being driven into poverty and debt, and while millions of people go without access to health care, decent schools, higher education, decent and affordable housing, safe drinking water, decent public transportation and other necessities. And our government spends these colossal sums on what amounts to corporate welfare, to help ensure the continued profits of giant energy corporations, weapons manufacturers and others, to maintain an empire and continue policies of global domination that actually make us all less safe.

Today’s peace movement is not as large and visible as it was in 1968 and the years that followed, but we are trying to change that. In some respects, though, today’s anti-war movement is a little bit ahead of where it was in 1968. We now have a clearer understanding that, as in 1968, these policies are the product of a bi-partisan consensus. The Democratic Party leadership is every bit as supportive of illegal wars and interventions as it was in 1968. Its members in Congress regularly vote with their Republican colleagues to fund wars and a foreign policy aimed squarely at global domination. Instead of a system of “checks and balances,” they just write the checks. As in 1968, its leaders stifle those who support more progressive candidates — witness the debacle of 2016. The Party and its Chicago machine remain entrenched supporters of an unjust system, protecting corporate profits and power no less than their Republican counterparts.

More than in 1968, we have a clear understanding that the issues of war abroad and the struggles against racism, police violence, privation and poverty at home are all related — they are one struggle. Today we understand that all of these evils are rooted in a class-ruled economic system, in which the dominant class uses its wealth and power to control the political process, buy political results, and advance its inhumane agenda — all to benefit itself, with reckless disregard for the consequences to the rest of us, and to all life on the planet. Today’s anti-war movement will assert its right to use peaceful, legal protest, but we understand that we must organize against the institutions that generate war and racism, and not juts protest their effects. Some of us may be from that generation, but this is not your grandparents’ peace movement.