Protester: ‘Is This My Last Free Birthday?’

Above photo: On Inauguration Day, more than 230 people were arrested during anti-Trump protests [Reuters/Bryan Woolston]

More than 200 anti-Trump protesters are facing felony charges that could land some in prison for 70 to 80 years.

Washington, DC – When Olivia Alsip travelled to the capital to protest against the inauguration of right-wing US President Donald Trump, she didn’t imagine she would end the day behind bars and later face up to 80 years in prison.

Thousands of people journeyed from across the US to Washington, DC, to protest on the first day of Trump’s presidency, January 20.

During the swearing-in, Alsip was among the more than 230 protesters arrested when officers from the Metropolitan Police Department (MPD) blocked off a large area and hauled off nearly everyone.

“I am wondering if my 24th birthday next week will be my last as a free person,” she says by telephone from Chicago. “I’ve never in my life had such a painful and stressful experience. There are no words to convey the severity of this.”

“Our experience in police custody [that day] was totally dehumanising. We were kettled, treated like animals and denied basic human rights and dignity,” she recollects. “People were forced to urinate on the streets and denied water and food.”

Anti-Trump chants were occasionally drowned out by the thuds of sound grenades and smoke bombs.

Left behind was broken glass from the windows of cafes, restaurants and banks. Declarations of resistance marked the walls and pavements: “Make racists afraid again,” and “F*ck Trump”.

Images of a limousine in flames later made it onto television screens and the front pages of news websites around the world.

On January 21, most of the 230 protesters and bystanders arrested the day before were charged with felony rioting, which carries a maximum prison sentence of 10 years and a $25,000 fine.

But on April 27, the Superior Court of the District of Columbia returned a superseding indictment which added additional charges for some 212 defendants, three of whom had not previously been charged.

With new felony charges including urging to riot, conspiracy to riot and destruction of property, many of the defendants are facing up to 80 years in prison. Many other defendants, among them journalists, are facing more than 70 years.

2pm is my first court case since getting indicted. I’m facing 80 years in prison for an anti trump protest along with 200 other people.

A handful of defendants have made deals with the authorities and entered guilty pleas in exchange for significantly shorter sentences.

But more than 130 of them have joined a ‘Points of Unity’ agreement, a collective pledge to reject any potential plea deals and reject cooperation with the prosecutors that comes at the expense of their co-defendants.

Replying to Al Jazeera by email, MPD spokesperson Rachel Reid said: “the arrests on Inauguration Day is the subject of pending litigation and… the MPD has no comment”.

The US Attorney’s Office for the District of Columbia failed to respond to Al Jazeera’s requests for a comment.

‘Innocent until proven guilty is a falsehood’

For Alsip, the ever-present weight of the charges has already taken a toll on her life. “I’m pretty shocked by the impact it’s had on my personal life,” she explains.

“It seems that innocent until proven guilty is a falsehood – all the way from the prosecution and police to the people who had previously supported me in my activism. It’s hanging over my head the entire time, which makes it really challenging. It hinders your ability to plan your life.”

More challenging still, she must travel from Chicago to the capital for each court hearing between now and her trial date in March. She says the legal and travel costs are placing an immense burden on the defendants.

“Most of us don’t have a whole lot of money,” she says, adding that she refuses to take a plea deal.

“Generally we are fighting the rich because we are economically or politically disadvantaged and don’t have a lot of capital.”

She adds of protesting Trump’s far-right policies: “Communities like ours cannot [be silent]. It’s a matter of life and death for some of us. The status quo is extermination and to be ostracised. If there is a time during my life when we need protest most, it’s now.”

Taylor, one of the defendants, spoke to Al Jazeera under a pseudonym due to fear of “harassment by the alt-right” on social media, explaining that several defendants have had their names, addresses and places of employment posted online.

“I was arrested when the police kettled the crowd,” Taylor says, explaining that many protesters and bystanders were disoriented by pepper spray and stun grenades.

“The MPD closed off an entire city block and arrested everyone within that block. There was no order to disperse and no warning,” Taylor recalls.

“It is no coincidence that this repression coincides with the first visible manifestation of resistance to Trump’s regime.”

Taylor’s accusations that the police failed to give warnings were echoed in a report (PDF) published by the DC Mayor’s Office of Police Complaints.

It concluded that “less than lethal weapons were used indiscriminately and without adequate warnings in certain instances”. 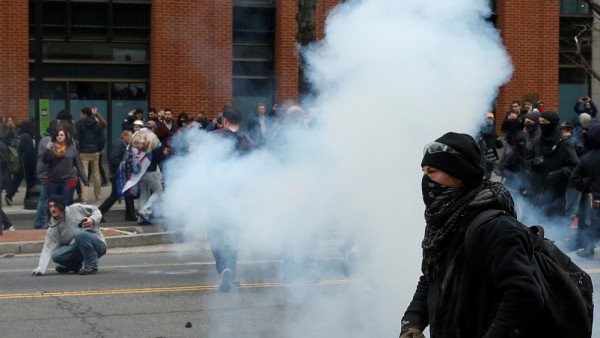 Sam Menefee-Libey of the DC Legal Posse, an activist group that supports the defendants, describes the charges as “specious” and a “blatantly politicised” effort to deflect attention from the police’s “brutal force” on January 20.

“Folks know that the carceral state is a defining fact of political life for communities of colour and the left for decades, and this is also a notable escalation of that,” he argues, adding that the prosecution of the defendants will set a precedent for further crackdowns on dissent.

“I don’t understand why people aren’t treating this as more than 200 canaries in a coal mine,” he says, calling for broader solidarity with the defendants.

“Thousands of people put themselves on the line while engaging in direct political action on Inauguration Day. Many of them were met with horrible police violence, and it deserves more attention.”

As protests flourish in cities and towns across the US, at least 18 states are now considering 30-plus bills designed to curb protests by introducing increasingly severe penalties for demonstrators.

Earlier this month, Oklahoma Governor Mary Fallin signed into law a bill that will increase penalties against activists who trespass on property with a “critical infrastructure facility”.

Another bill in Missouri will prohibit protesters from wearing masks or disguises during demonstrations, while proposed legislation in several states – Florida, Tennessee, Georgia and Iowa – will impose harsher punishment on people who block traffic or trespass.

Deeming the proposals as unconstitutional, the ACLU says it “will fight in statehouses against any bill that violates the First Amendment, and for any that become law, we’re hopeful the courts will see these bills for what they are: unlawful infringements on our right to speak”.

The United Nations warned in March that 16 such bills, if passed, will violate international human rights law and have a “chilling effect” on protesters. The bills would strip “the voices of the most marginalised, who often find the right to assemble the only alternative to express their opinions”. 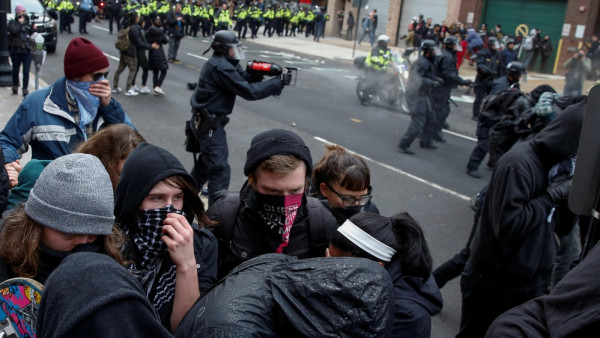 Nick Zerwas, a Republican state representative in Minnesota, coauthored one of the bills introduced recently in his state legislature. It aims to impose a harsher punishment for protesters who block freeways, access to airports or access to public trains.

“It’s already against the law to block a freeway or access to airport already, or a commuter train,” says Zerwas, speaking to Al Jazeera by telephone.

Explaining that the punishment would increase from misdemeanour to gross misdemeanour for those offences, he adds: “I think the criticisms are just misdirected. You don’t have a first amendment to pull your car perpendicular in the freeway in the middle of a protest, for instance.”

The crackdown on protests comes at a moment of growing confrontations between anti-fascists and other leftists on the one hand, and activists from the alt-right and other hardline Trump supporters on the other.

Matthew Whitley, a spokesperson for the Metropolitan Anarchist Coordinating Council (MACC), argues that there is a “clear bias” in the treatment of left-wing protesters and pro-Trump demonstrators, among them far-right hardliners.

Whitley pointed to the case of a 34-year-old member of the Industrial Workers of the World, a left-wing union, who was shot by a Trump supporter outside a speech by former Breitbart editor Milo Yiannopoulos in January. 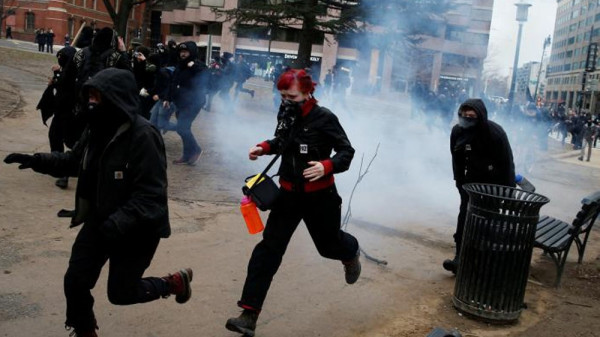 “The strange reality now is that we have a president in power who is supported by white nationalists, neo-Nazis and the far-right,” he argues, pointing out that although far-right activists have been arrested, they have not experienced the kind of mass arrests faced by anti-Trump protesters on Inauguration Day.

“The fact that Trump is supported by these groups inevitably has to have an impact – he’s not going to oversee a harsh crackdown on his own supporters.”

Arguing that the charges against her and other protesters are politicised, Olivia Alsip alludes to an incident that took place the day before her arrest. John Joseph Boswell, a millionaire who travelled to the capital to celebrate Trump’s inauguration, was arrested after sexually assaulting a maid in his hotel room.

Although he later pleaded guilty to a misdemeanour sexual abuse charge, Boswell was given a suspended sentence of 10 days in jail, a $50 fine and six months of probation.

“If the government cared about people’s suffering they’d be working with us and engaging oppressed communities. But private property is more important to the government and society at large than human lives,” Alsip concludes.

“I’m looking at spending more than three times my age in prison for going to a protest. No human being should be in a cage that long, especially not for trying to live.”