Chaos erupted on the streets of Hong Kong’s shopping district of Mong Kok on Sunday night as hundreds of protesters fought running battles with the police.

After the first mass rally in Kowloon against the government’s now-suspended extradition bill
drew an estimated 230,000 peaceful protesters, many remained behind to occupy the streets of Mong Kok and confront police late into the night.

Officers warned the protesters that they were taking part in illegal assemblies.

Police chased some protesters down and several were subdued by riot police armed with shields.

Soon after 3am on Monday police issued a statement saying they had arrested six people in connection with the march and the running battles that followed.

Four men and two women, aged between 20 and 66, were taken into custody, police said.

One was arrested during the march for failing to produce proof of identity, while five were arrested in Mong Kok on suspicion of assaulting a police officer, and the others for obstructing officers in the execution of their duties.

Standoff between HK police and anti #extradition protesters with some protesters subdued to the ground in Mong Kok. Pics by @VictorTing7 of @SCMPNews on the ground pic.twitter.com/wcfpJNtq5b

By midnight, police had largely taken back the streets of Mong Kok, but dozens were still gathering in different parts of the area.

Three pro-democracy lawmakers were at the scene to ensure police did not use excessive force against protesters.

In a statement issued in the early hours of Monday, a government spokesman expressed regret that some protesters occupied streets of Mong Kok on Sunday night.

Their actions affected traffic and business activities and also created inconvenience to the public, it said. 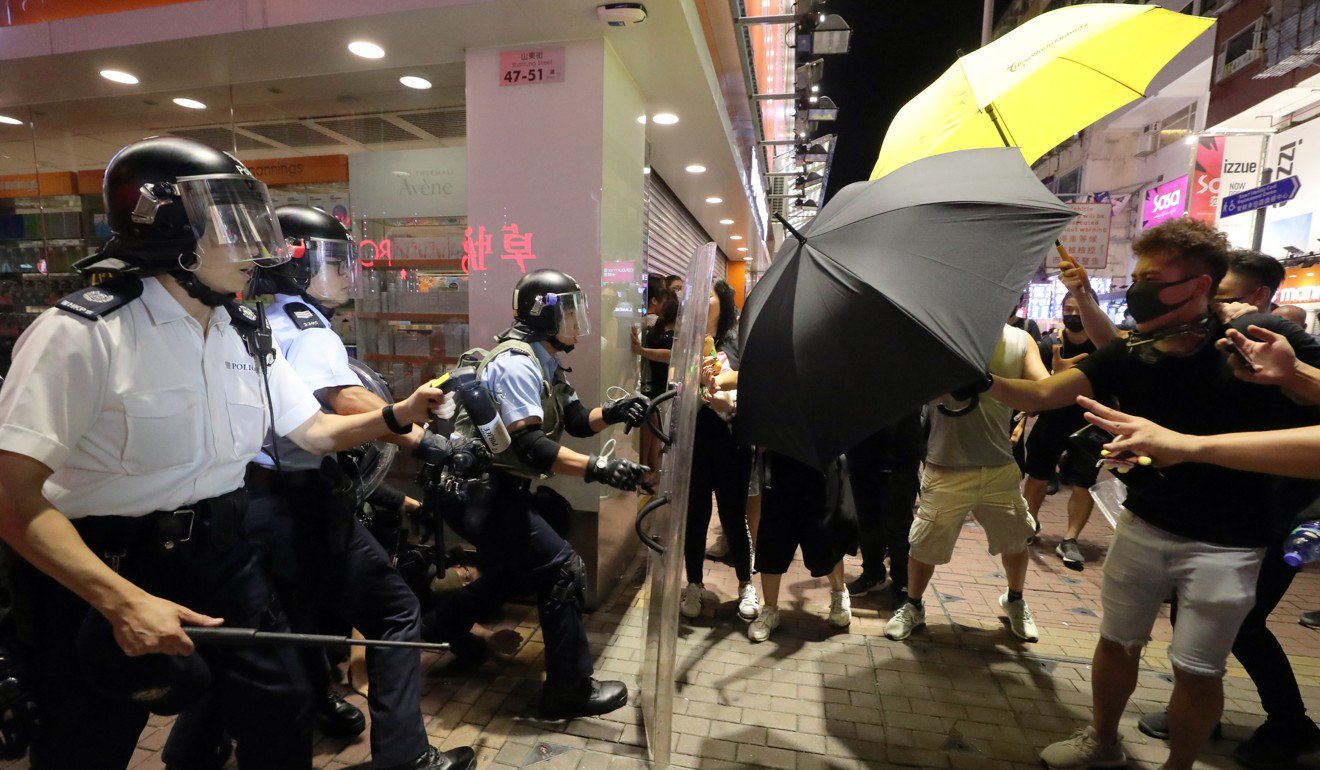 It added Hong Kong is a society that upholds the rule of law and its citizens must observe the law.

The march that took place earlier in the day in Tsim Sha Tsui was conducted in a largely peaceful and rational manner, the spokesman added.

through the tourist hotspot to the city’s high-speed rail terminus at West Kowloon.

lived up to its billing as “peaceful, rational and graceful”.

The march came following a series of protests that had turned violent, including a demonstration outside the Legislative Council complex on July 1 that culminated in the storming and ransacking of the legislature by hundreds of mostly young protesters. 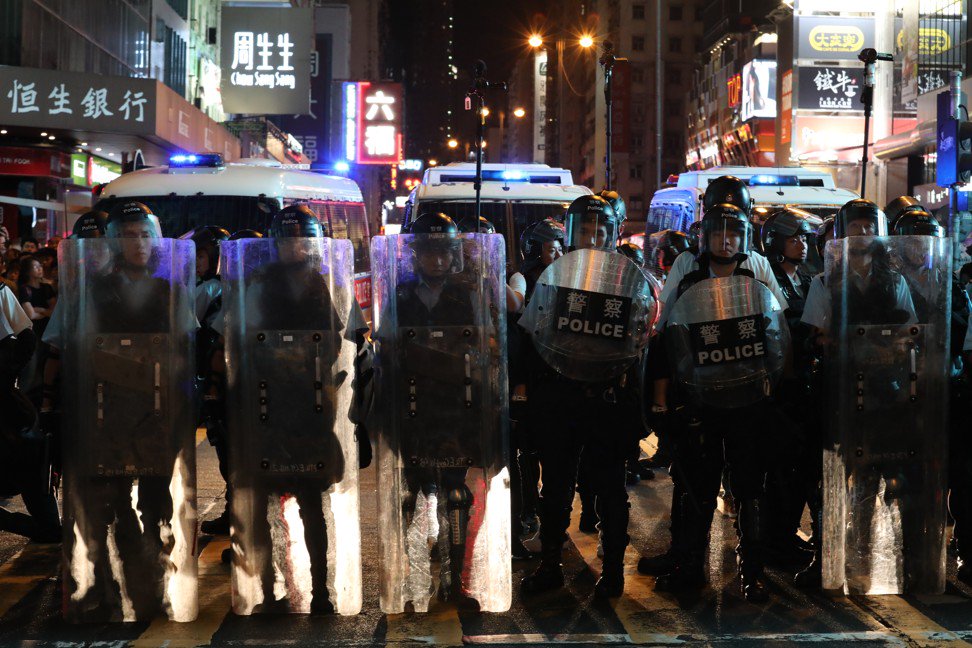 the government’s now-suspended plans to pass a bill

that can see anyone in the city extradited to jurisdictions that Hong Kong does not have an extradition deal with, including mainland China.

After organisers announced the end of the protest at around 7.30pm, many protesters continued to linger outside the West Kowloon high speed rail station, while others spilled out onto Canton Road again, saying they were “going shopping”.

HK police have largely cleared the crowds in Mong Kok. Pics by @VictorTing7 of @SCMPNews pic.twitter.com/Fis4NER4qm

Thousands then marched up Nathan Road all the way to Jordan, and then onto Mong Kok.

At around 10.30pm, dozens of police officers formed a cordon line to stop protesters from going any further.

Protesters took out their umbrellas in case the police used force to disperse them. 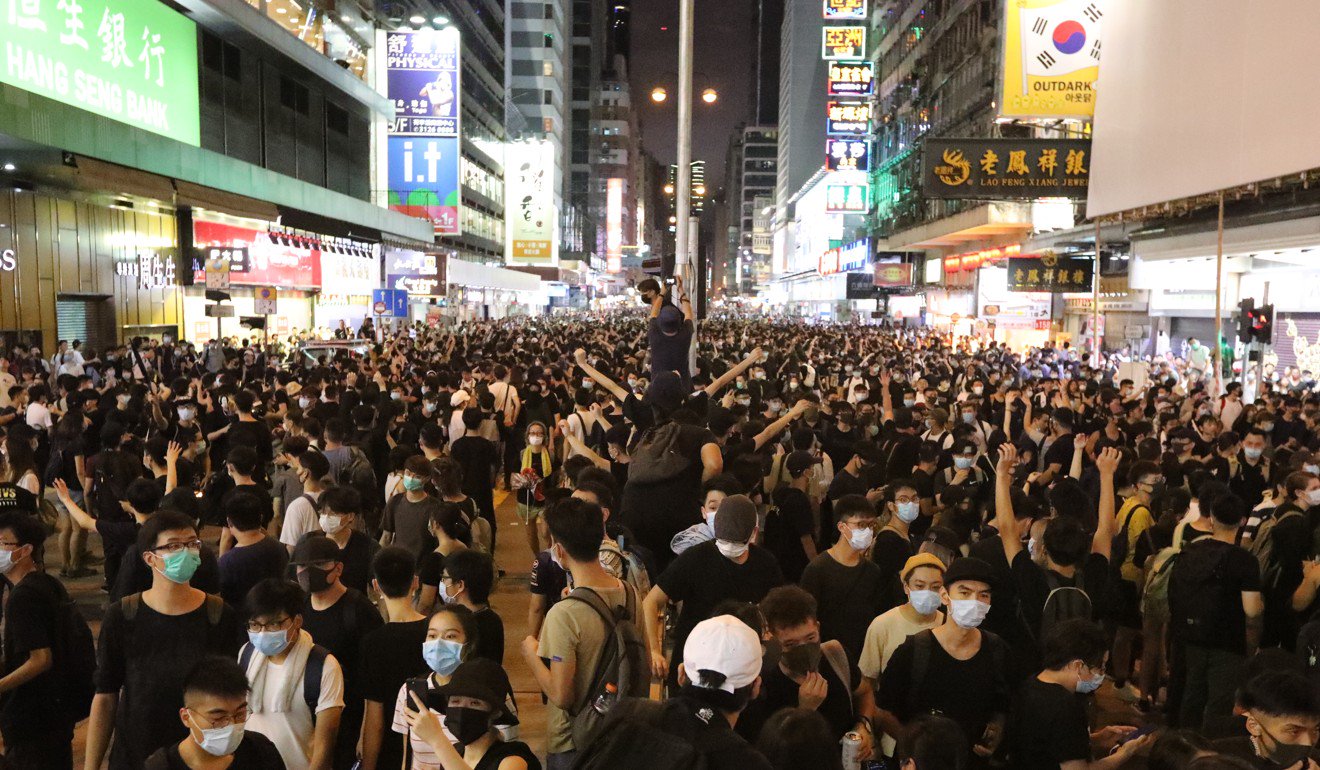 “You are taking part in an illegal assembly and you must leave now. Otherwise, the police will use suitable force on you and get you out of here,” police announced to the crowd through loudspeakers.

Protesters retreated to some distance as the officers advanced.

Democratic Party’s lawmaker, Roy Kwong Chun-yu, was in Mong Kok to make sure the police did not use excessive force in dispersing the crowd.

Civic Party’s lawmaker Jeremy Tam Man-ho said police officers were “hyperactive” and kept using long shields to push against a group of 20 to 30 reporters, as well as him and fellow democrat Au Nok-hin.

Tam quoted diners as reporting that police officers went into a McDonald’s and dragged a person out onto the street.

He criticised police for not allowing journalists to enter the fast food restaurant and monitor what officers were doing.

The three pro-democracy lawmakers were there to ask police to delay any further action so protesters had enough time to leave. 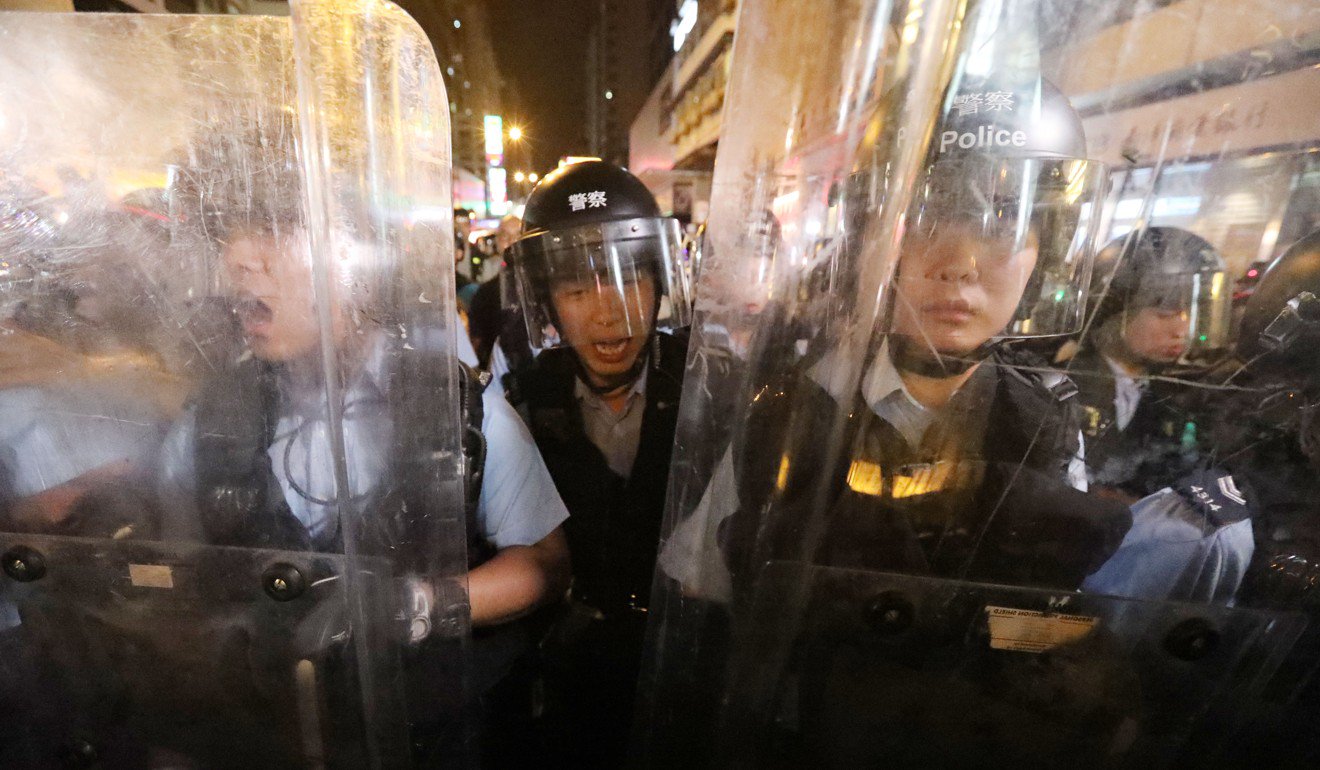 Police out in force in Mong Kok in echoes of the dark scenes from 2016. Photo: Felix Wong
Share:

As of 12.30am, dozens of protesters were still gathering in Mong Kong.

Mong Kok was the venue for overnight rioting in February 2016, as hundreds of people gathered to object to the eviction of food hawkers on the first day of the Lunar New Year.

The chaos at the time prompted the police to fire shots in the air, leaving scores injured.