By John Amidon, Beyondnuclearinternational.org
June 4, 2019
| Resist!
Protesters At Drone Base And Nevada National Security Site Cross The Line For Peace2019-06-042019-06-04https://popularresistance-uploads.s3.amazonaws.com/uploads/2017/12/popres-shorter.pngPopularResistance.Orghttps://popularresistance-uploads.s3.amazonaws.com/uploads/2019/06/amidon-slider.png200px200px

Above Photo: Headline photo of the author at the Nevada National Security Site by Sherri Bauer.

We came for the annual Nevada Desert Experience Sacred Peace Walk. But this year, it is different. This year, eight of us will leave the Walk in belly chains. It is Holy Week, Good Friday, April 19, 2019. We are loaded into a white truck to begin the 50-minute ride from the Nevada Test Site — recently rebranded the Nevada National Security Site (NNSS) — to Pahrump Jail.

Our annual pilgrimage for nuclear abolition and in support of Western Shoshone sovereignty had begun a week earlier in front of the National Atomic Testing Museum in Las Vegas. It ended at NNSS where, in the past, we were mostly apprehended, then released. But today we are being treated with a heavier hand.

We walk because we want to see an end to nuclear weapons, but also because we are deeply concerned that should radioactive waste move to be stored at Yucca Mountain it will never be safe. All of these issues intersect at the Nevada National Security Site, a name designed to obscure its deadly and poisonous work.

The Western Shoshone People are the legal owners of the land we traverse and also of much of the State of Nevada, a sovereign nation under occupation.

(Watch a video about why we walk, below).

One of the most beautiful aspects of this year’s walk ( and most years) is the amiable, integrated group of concerned citizens who attend. In 2019 we are Western Shoshone, Paiute, Apache, Chinese, Japanese, Hispanic, black and white, young and old, male and female, gay and straight, representing a variety of faith traditions from across the land. The largest contingent is from Las Vegas, NV, the base for the Nevada Desert Experience. The second largest group from Iowa is a surprise, consisting of mostly young Catholic Workers from the Des Moines area. Big Sky country, (aka Montana) has several representatives as does California. Some of us hail from upstate New York.

Many of our group are long-time participants, returning year after year. This year, the local Fox Affiliate, Channel 5 airs a live report as we prepare to set off — “A 60 mile walk for peace”. Today we will walk the Las Vegas Strip carrying signs and handing out leaflets to the tourists, bringing needed awareness and information about drone warfare and nuclear weapons. At Fremont Street, we hold a die-in, stop for lunch at the Las Vegas Catholic Worker, then protest briefly outside the Department of Energy and National Security Technology Offices. Our walk ends for the day at the statue of Martin Luther King, Jr. in North Las Vegas.

Monday and Tuesday offer the peace walkers an opportunity to more fully experience the Mojave desert. The distant snow-capped peaks of nearby mountains frame the valley and contrast with the sparse desert terrain along Highway 95. On Monday evening, most of our group camp amongst the Joshua trees at Lee Canyon Road. It is a cool evening spent in quiet conversation and much needed rest.

Tuesday we arrive at Indian Springs and Creech Air Force Base, an enormous military establishment presently engaged in the US drone assassination program, which terrorizes large regions of the world while undermining our security here. We will return tomorrow to vigil, but for the moment continue on to Cactus Springs and the Temple of Goddess Spirituality Dedicated to Sekhmet. 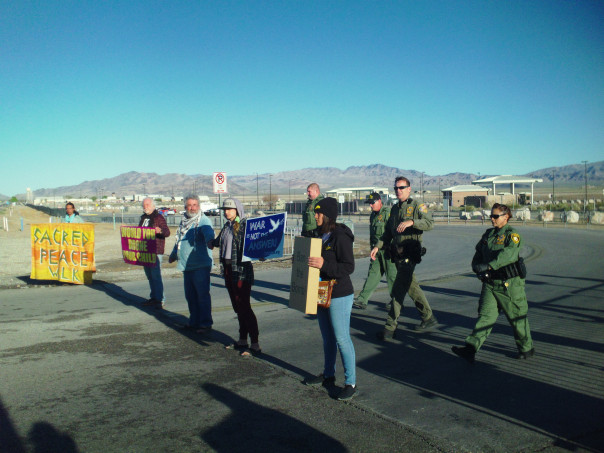 The Temple is an oasis of peace. It was partially established to be a counterpoint to the massive violence of the Nevada National Security Site where approximately 1,000 nuclear weapons have been detonated and subcritical testing of nuclear weapons continues to this day, in violation of the nuclear Non-Proliferation Treaty (NPT). The Temple is a place of exceptional beauty and a life affirming center for those who support peace and justice. This evening it is our deeply appreciated resting place.

Even in this moment of tranquility and reflection, we must still discuss the upcoming legal ramifications of our protest at the NNSS. The tension and concern during the discussion is palpable. This is an hour of discernment, looking at and assessing risks and considering our respective roles in the upcoming actions. We suspect that, since prosecutions resumed in late 2018, some of us will likely be arrested and may have to spend several days in Pahrump jail.

We wonder what the charges might be when we “cross the line” onto the NNSS property. Given the arbitrary and often illegal conduct of our legal system, we cannot know for sure. We conclude that the likely outcome for crossing the line will be a simple trespass charge. But inwardly, each of us asks “what risks am I willing to take to bring attention to the urgent need for nuclear abolition?” “Can we truly help in addressing the environmental racism and the illegal occupation of the Western Shoshone Homeland?” “Am I willing to risk jail time? Can I handle it?”

Wednesday morning’s vigil at Creech AFB presented some unexpected opportunities. We learned anyone arrested for blocking the road would be released on site that morning. An unplanned civil resistance action took place when four spontaneous volunteers joined together to block the road to prevent drone pilots from entering. While this act is largely symbolic, Air Force personal faced with the reality of protesters at their gate do reflect on their mission and the illegality of killing people in foreign lands, in undeclared wars, often civilians, sometimes children and women and largely noncombatants. Soon after the arrests, the four resisters were released.

That evening back at the Temple, several health care professionals spoke to us about the high incidence of cancer amongst those working at the NNSS. Concerned for the patients and for the workers presently at the NNSS, they asked how we might make the DOE employees more aware of the risks.

Then Chief Johnnie Bobb, and a Western Shoshone Spiritual Person, arrived. He was a welcome presence amongst us. He exuded good humor, tranquility and patience, all of which encouraged a sense of well being in our community. 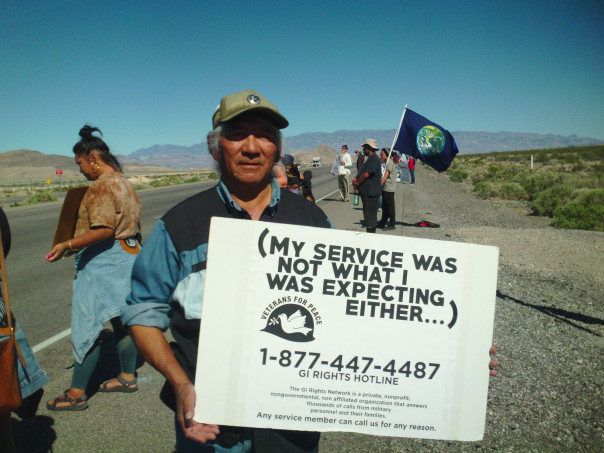 Thursday morning came early to the sound of drums as Chief Bobb called us out for morning prayers in the Western Shoshone tradition. We stood and listened as Bobb prayed and sang and lead us in circle dances around the fire.

The last full day of walking to Peace Camp was upon us. Our community was now transformed, a magical bubble of intense energy, floating down the highway, through the vast expanse of this rugged desert land. Tomorrow would be the culmination of our walk, our prayer, our love and the challenge of bringing light, love and understanding to a group of people at the NNSS, possessed by nuclear demons, trapped in fear and profound ignorance.

Peace Camp lies on a stretch of hilly land, directly across the road from Mercury, Nevada and the NNSS. It is a relatively calm night in an area known for its wind. Tonight the desert is peaceful.

Early Friday morning, Johnnie Bobb conducts a Sunrise Ceremony inside the willow circle, a much anticipated and treasured spiritual gathering many of us have come to love. He sings songs to the animals and songs to the rocks. He speaks of Mother Earth and teaches us to offer her water.

We prayed and danced in community and several sang songs of kindness and caring. The sun rising in the east brought light and warmth while the moon setting behind the distant western mountains, gave each of us a blessing. Here we could experience the grandeur and love of creation, a fleeting moment of belonging to something so much larger and pure, something so vast and wondrous, bringing with it the humble realization that we are only one small piece of this magnificent creation.

Soon we would have our last breakfast together before the Nuclear Stations of the Cross. Fourteen stations were set out, each represented by a different affliction we are now facing. The group prayed in remembrance of Good Friday and prayed for strength and guidance, to allow us to help alleviate the suffering so many people are presently experiencing worldwide. 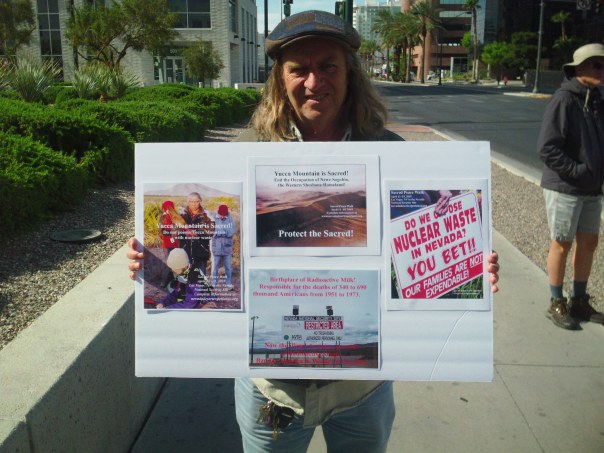 Mark Kelso holding a display board used on the Walk and at the NNSS. Mark spent 4 days in Pahrump Jail.

We then joined in circle and Chief Bobb spoke to us briefly before we proceeded to the line beyond which lies the NNSS.

We also carried the Peoples Indictment of the Nevada National Security Site, Crimes Against Peace and Crimes Against Humanity, April 19, 2019, which explained the many laws and treaties that the DOE was in violation of. We presented these documents to both the Sheriff’s representative and to the DOE representative who were present. We also carried copies of the NPT which the US government is in violation of, having failed to disarm and in fact producing new nuclear weapons.

Twenty five of us were arrested then released at the NNSS with a warning citation. Eight of us were transported to Pahrump jail. For six of the eight, the charge on the citation read “attempted trespass not amounting to burglary”. Our arraignment is tentatively June 10, 2019, however as of this writing the Nye County DA has of yet not filed charges. We are awaiting further developments.

In the space of a week, the Sacred Peace Walk provides many levels of extraordinary life experience. The friendships made, the tender moments of caring for each other, and the personal joys shared, are not easily captured in words but pulse through the beauty of Joshua trees in bloom, the desert flowers, the desert wind and the rare rainfall. You can join us next year for this amazingly complex and intense experience!