Above Photo: An activism group are protesting the hostile environment by blocking a coach company’s entrance (photo: Reclaim the Power)

Environmental activism group Reclaim the Power are protesting outside the entrance of a coach company accused of assisting the government with deportations.

Three protesters have suspended themselves on tripods, blocking access to Hallmark Connections in Stanwell in an attempt to challenge what it claims is its “complicity in the violent deportations of asylum seekers in the UK”.

A spokesperson for the group told i volunteers will remain there until the company agrees to end its involvement in deporting migrants.

The spokesperson claimed the coach company takes asylum seekers from detention centres to flights where they will be deported.

“These people are friends, families, they’re neighbours, and so these deporations are tearing our communities apart. They’re carried out the basis for the policies of the hostile environment so we’re asking this company to end its involvement in this violent regime.”

Hallmark Connections does not solely rely on these journeys for its business model, the group alleged. It is for this reason Reclaim the Power want to pressure the company into no longer carrying them out.

“They don’t need to be doing the deportations. We’re saying you’re being complicit in something very unjust and very racist as well.”

The group has written a letter to the company outlining their action and demands.

Hallmark Connections said in a statement: “We understand the group ‘Reclaim the Power’ are protesting about alleged involvement with the transfer of migrants.

“Although peaceful, the police were present during the entirety. We provided the activists with water for their comfort during the hot weather.”

A spokesperson for Hallmark Connections said it does not comment on elements of the company’s business due to client privilege. 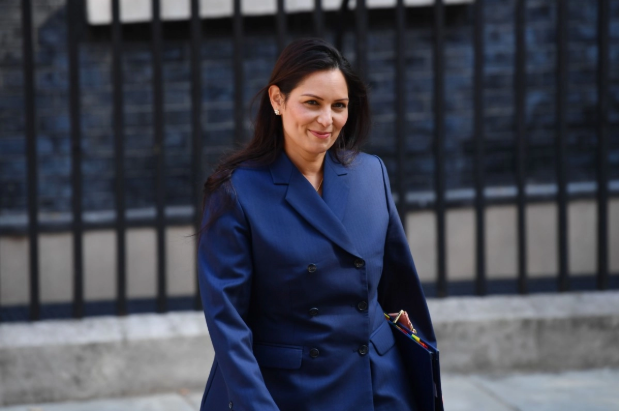 The group are putting Priti Patel ‘on notice’ (Photo: Getty)

The protest comes just hours before another demonstration led by Reclaim the Power is expected to take place in central London, similarly protesting the government’s immigration policy. The group said it is putting Priti Patel “on notice”, calling for the new Home Secretary to end the “Hostile Environemnt” or face further escalation in October.

The events form the group’s “Power Beyond Borders”, a mass direct action camp targeting both the Hostile Environment and the energy company Drax’s plans for a new gas power plant.

Lucille from the All African Womens’ Group, a self-help group of women asylum seekers and immigrants – many of whom have been detained in Yarl’s Wood – said: “As women, we suffer particularly from the hostile environment because we are poorer to begin with, are often traumatised from rape and other violence and because we are often mothers with responsibility for other precious human beings.

“We face a sexist, racist Home Office and companies that profit from deportation. We all have a right to be here and to be treated with respect. We demand an end to the hostile environment, to detention, destitution and deportations and an end to the separation of families.”