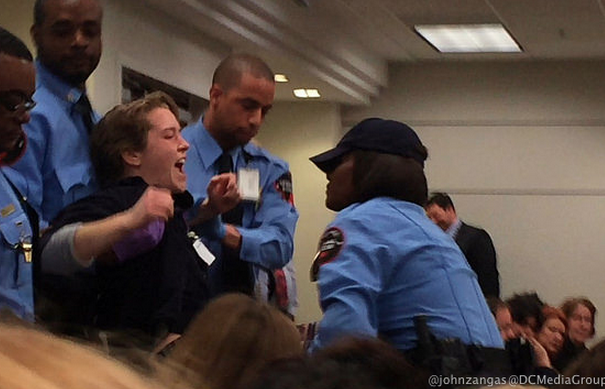 Photo by John Zangas. Security drags protestor Sean Glenn out of the FERC meeting: “As a kindergarten teacher, I am here for the children.”

At his first meeting as FERC Chairman, Commissioner Norman Bay gave the cold shoulder to demonstrators who repeatedly interrupted him to protest what they say is the Federal Energy Regulatory Commission’s rubberstamp approach to regulation.

“Oh my God, we have a situation here. The situation is not going away,” shouted protestor Charles Chandler. “There is no democracy here. You just ignore what I write on my computer.”

“Well, I guess one wouldn’t be the chairman of FERC without having to deal with protesters,” Bay said, after the first of six were escorted out of the room one at a time.

Video of protests at FERC meeting

Bay was acknowledging a new reality for the formerly obscure agency. As former FERC Chairwoman Cheryl LaFleur put it, “We have a situation here.” FERC has come to the forefront as gas infrastructure projects have increased exponentially. Pipelines, compressor stations and LNG terminals face “unprecedented opposition” instead of typically smooth approval.

“Commissioner Bay, FERC truly needs to be about the public not corporate interests, not the interests of the fossil fuel industry,” said Ted Glick, National Campaign Director of Chesapeake Climate Action Network, as security led him out of the room. “FERC is a rubber stamp for the gas industry. Commissioner Bay, you need to lead in ways that may be new to FERC.”

But by clicking off his microphone and staring into space every time a demonstrator stood up to voice their objections, Chairman Bay signalled that FERC was not open to new ways.

“Interrupting these open meetings does not help your cause,” he said, stating that out-of-turn comments could be regarded as ex parte communication.

If the Commission wanted to appear responsive to the public, it did not help its cause either. Aggressively brushing off an ongoing “situation” may lend credence to the claim that it turns a deaf ear to people’s concerns. A main complaint is that industry has ample access to FERC–the agency even gives seminars to help with applications–while community members cram to get up to speed with complicated laws and procedures. A recent article in Greenwire pointed out the close ties between FERC and the gas industry.

Bay said that he would like to respect the protestors’ First Amendment rights, but they will have to comply with agency rules of conduct. He gave no indication that he thought FERC’s process was insufficient. Submitting written comments to FERC during designated comment periods is the best way to get results, Bay said.

Some of the protestors at today’s meeting highlighted the Commission’s approval of the Cove Point LNG export terminal conversion.

“As a kindergarten teacher I am here for the children. I am concerned because they are unable to breathe in Calvert County,” said protestor Sean Glenn. “I am here for their future, the future that you are destroying. The air is so precious and made more so by all the expansion of extracted dirty energy projects which you approved.”

The EPA has issued an F rating in air quality for Calvert County, MD, where Cove Point LNG is located; when completed, the facility will emit an additional 20.4 tons of pollutants per year. Dominion Resources was required to purchase emission credits allowing them to expel more pollutants.

In a statement, community coalition group We Are Cove Point demanded that FERC halt construction on the Cove Point terminal until it ruled on a request for rehearing on the approval certificate.

We Are Cove Point also called the rule FERC issued in March to suppress outbursts at Commission meetings “an industry friendly gag rule.”

Former Chairman Cheryl LaFleur got a chummy send-off from her head position with a gift of New England Patriots quarterback Tom Brady for the Massachusetts native. She will remain on the Commission. FERC staff also said farewell to Deputy Chief Judge Bobbie McCartney.

The Commissioners meeting planned for May is not likely to be interruption-free. Beyond Extreme Energy, a coalition group which says it represents “frontline communities” affected by the gas infrastructure which FERC approves, has called for 10 days of protest at FERC headquarters in Washington, DC in May, including the Commission meeting.