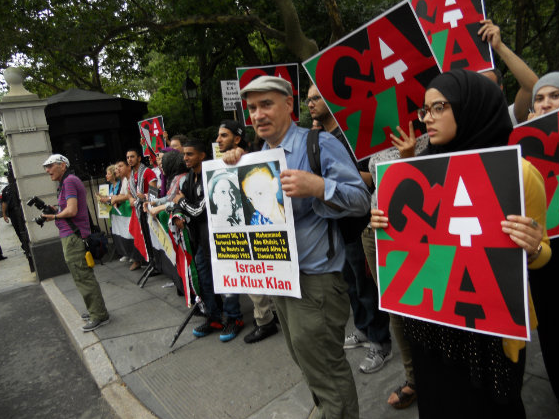 Here’s a question: why would the New York City Council and various other local and state politicians decide to wade into the miserable, never-ending, blood-filled dogpile that is the Israeli/Palestinian conflict? In what way does a press conference on the Middle East dovetail with the actual business of our elected officials here in New York? Could a press conference called “New York Stands with Israel” possibly serve any other concrete purpose except to be a magnet for controversy? Seriously, how could this possibly end well?

And yet that’s exactly what happened this morning on the steps of City Hall, where a passel of elected officials held a press conference to declare their support for Israel in the midst of this latest bout of sad, terrifying sectarian violence. The group included Senator Charlie Rangel, his recent opponent State Senator Adriano Espaillat, State Reps. Carolyn Maloney and Jerrod Nadler, Assembly Speaker Sheldon Silver, and city council members David Greenfield and Mark Levine, among others. The event was organized in cooperation with the Jewish Community Relations Council of New York and the United Jewish Appeal Federation of New York, a large philanthropic group. Ambassador Ido Aharoni, the Israeli Consul General here, also attended. You’ll absolutely be able to predict what happened next.

The press conference began at 10 a.m. inside the City Hall gates. Outside, separated by 100 yards or so of concrete, some iron gates, and some very unamused police officers,the inevitable counter-demonstration began at the same time. That demonstration was organized on Facebook by two prominent local pro-Palestinian activists, Raja Abdulhaq and Lamis Deek. Abdulhaq is a community organizer, while Deek is a human rights attorney with the National Lawyers Guild. The event description decried the City Council’s support for what Abdulhaq and Deek called “Israel’s continuous occupation and terrorism against innocent people in Palestine since 1948, and following the latest Israeli assaults and massacres against Palestinians in Gaza.” They added, “New Yorkers refuse to have the city council speak on their behalf in supporting Israel’s atrocities in the past week where more than 156 of Palestinians were killed and thousands injured.”

The City Council & Co. blithely went about their presser, doing their best to ignore the shouting outside, which was clearly audible even from a great distance. Demonstrators chanted “Not another nickel for Israel’s crimes!,” “New York to Palestine, ethnic cleansing is a crime!”, and “Zionism is racism!” One sign read “Israel = Ku Klux Klan,” and paired an image of Emmett Till, the black teenager killed by white men in Mississippi in 1955, with one of Mohammed Abu Khdeir, the 16-year-old Palestinian kidnapped by three Jewish Israelis and burned alive on July 2. Khdeir’s murder is believed to be in retribution for the killings of three Israeli teenagers, abducted on June 12 and later found dead in the West Bank.

Mayor Bill de Blasio didn’t attend the press conference, but as Capital New York points out, he did express strong support for Israel at a January event held by lobbying group AIPAC. The event itself became a magnet for a bit of controversy for the mayor: his staff left it off his public schedule, and a Capital reporter who tried to attend the event was speedily escorted right out the door.

After the press conference ended, some elected officials vanished back into City Hall. Others walked out the iron gates past lines of protesters, looking neither right nor left, with fixed smiles on their faces.