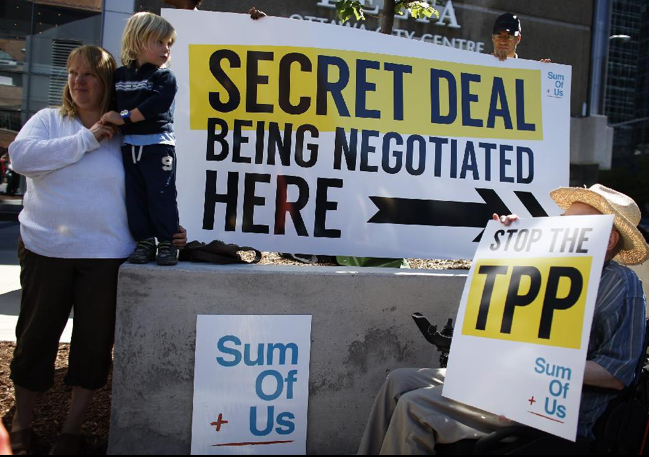 Protesters gathered outside the Delta Hotel in Ottawa Thursday morning where trade talks are underway among Trans-Pacific Partnership members.

Protesters held signs that said, “secret deal being negotiated here” and “stop the TPP,” while the Raging Grannies, an Ottawa-based satirical singing group, performed outside the hotel.

Canada is one of 12 countries involved in the talks, with meetings held behind closed doors.

The Citizen reported Monday it was believed at least some of the talks were being held at the John G. Diefenbaker Building, where the government’s international trade offices are located.

The Council of Canadians told the Citizen it believes there is too much secrecy around the talks, which were initially planned for Vancouver but moved to Ottawa at the last minute.

Negotiators are meeting to discuss agreements on intellectual property, investment, state-owned enterprises and rules of origin.

These countries represent almost 40 per cent of the global economy and a market of 792 million people.

An agreement is not expected to be reached until at least 2015.