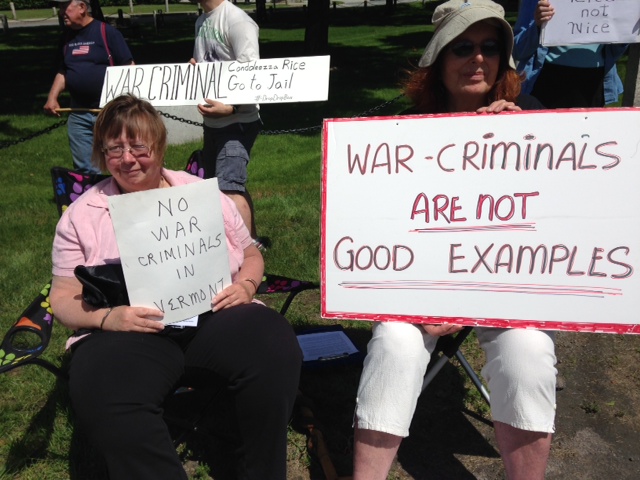 Twelve protesters disrupted a speech by Condoleeza Rice at Norwich University in Vermont with a mic check. The audience at the event was less than supportive. One of the protesters, Marie Countryman, was slapped by an audience member and bullied by others as she spoke.

Here is the text of the mic check:

I come here today because I stand for justice for all humanity.

I come here today because I cannot and will not be silent in the face of crimes against humanity.

I come here today to charge Condolezza Rice for having participated in and perpetrated crimes against humanity in the name of the citizens of the United States.

I come here today to charge Condolezza Rice as a war criminal who misled the American people about the presence of weapons of mass destruction in Iraq in order to draw us into an illegal, immoral and senseless war.

I come here today in remembrance of more than 200,000 civilians, young mothers, grandmothers and innocent children, who have died in Iraq and Afghanistan in illegal wars.

I come here today in memory of more than 6,650 U.S. soldiers who have died in this illegal and immoral wars.

I come here today to demand that Condolezza Rice be held accountable for dragging our country into an illegal war through lies and deception of the American people.

I come here today to charge Condolezza Rice as a key player in promoting the lies that led to war and selling war to the American people.

I come here today to charge Condolezza Rice with sanctioning torture, and continuing to defend torture.

I come here today to demand that Condolezza Rice be held accountable for the displacement of more than 7.5 million refugees of these illegal wars.

I come here today to charge Condolezza Rice for the more than 750,000 disability claims approved by the VA as a result of war.

I come here today to hold Condolezza Rice as a responsible party in the devastated infrastructure, health system and school system which remain in Iraq even with the troop withdrawl.

I come here today to demand that Condolezza Rice answer for the 22 veteran suicides each and every day.

Here is a local news report by Kyle Midura of WCAX.com:

NORTHFIELD, Vt. – On a day when President Barack Obama released his plan for coping with mounting instability in Iraq, a former cabinet chief from the previous administration offered her thoughts to Vermonters. Condoleezza Rice served as secretary of state from 2005 to 2009 and served as a national security adviser in the four years prior to that. She helped shape much of the United States’ foreign policy during the Iraq War years. That experience gives her a unique perspective on Thursday’s news and caused controversy when she arrived on Norwich University’s campus.

“I just met with my national security team to discuss the situation in Iraq,” President Barack Obama said.

Thursday afternoon, the president told the country he’ll send 300 advisors to Iraq as stability there erodes. A terror group composed of Islamist militants threatens to split the region along its ethnic divides. The president says the advisors will instruct forces and provide intel.

“American forces will not be returning to combat in Iraq but we will help Iraqis as they take the fight to terrorists who threaten the Iraqi people, region and American interests, as well,” Obama said.

“Americans are not going to support boots on the ground,” former Secretary of State Condoleezza Rice told students at Norwich University.

Rice told those in attendance that Iraq’s serious security concerns grew when President Obama ordered U.S. forces to leave. She conceded to mistakes made under the Bush administration, and focused her remarks on what needs to be done to control the current terrorist threat from ISIS.

“You gotta knock them back. You do not want those people in a swath of territory the size of Indiana. That will be a real problem,” Rice said.

Her suggestions mirrored the orders the president would later issue– ruling out a full deployment, but threatening special operations missions and possible drone strikes.

“She lied us into an illegal war, she defended torture, she stands for everything this country doesn’t stand for,” protester Crystal Zevon said.

Those in the crowd for the speech liked what they heard.

“The most important one is that democracy takes time,” said Laura Heller, a military attorney.

Heller deployed to Iraq twice, tasked with helping to build a new nation. She appreciated Rice’s reference to the messiness of democratic transitions and says it matches her experience.

“There’s no one-size-fits-all solution for governments and especially for democracy,” Heller said.

In handling the protesters, Rice said she’s glad to live in a country where dissent is tolerated, not met with secret police.

Despite the public nature of the event, our cameras were only allowed to roll briefly and with no sound. University spokespeople say those rules came from Rice, not them.

Rice spoke harshly of Russia and China, and says the world is a scary place with major powers behaving badly. Domestically, she called for immigration and education reform.