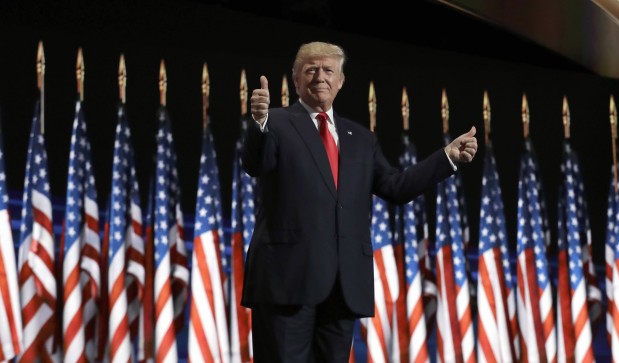 Protestors stand silently and hold up pocket copies of the Constitution. pic.twitter.com/yVzbRMnZX1

Last week, Khizr Khan, the father of a slain American war hero who was Muslim, held up his own well-worn pocket Constitution on stage at the Democratic convention and lambasted Trump for his proposal to ban Muslims from the U.S. “Let me ask you, have you even read the U.S. Constitution?” he asked.

Sales of the constitution soared on Amazon.com after Khan’s blistering speech. A version of the founding document currently ranks fifth on the website’s best-seller list.

Trump responded to the protesters by calling them “rude.”

“It’s sort of rude, when you think about it,” he said. “We want jobs, we want health care. We’re looking for the same thing. You want to have a good life. You want safety. And then we have people interrupting constantly.”

“I sorta miss my protesters,” he added, referring to previous demonstrators at his rallies. “The Bernie [Sanders] people had spirit. You don’t get it from Hillary.”

Maria Testa, a self-described author and member of the social justice group Maine People’s Alliance, explained later that she and her fellow activists stood up “silently and peacefully” at Thursday’s rally for the “principles for which Captain Khan gave his life.”

“America is a country built on the ideal that all people are worthwhile. That includes Muslims, women and immigrants. We are all stronger, together, because of our differences,” Testa said in a statement.

“Today we held up the Constitution and the Bill of Rights because we believe in a nation built on our best intentions as Americans, not the worst impulses of a racist few,” she said.

Some time after Testa’s group was ejected, a man was removed from the rally after yelling at Trump to release his taxes.

While Trump talks about his tax plan, a man calls out “release YOUR taxes.” He is escorted out.