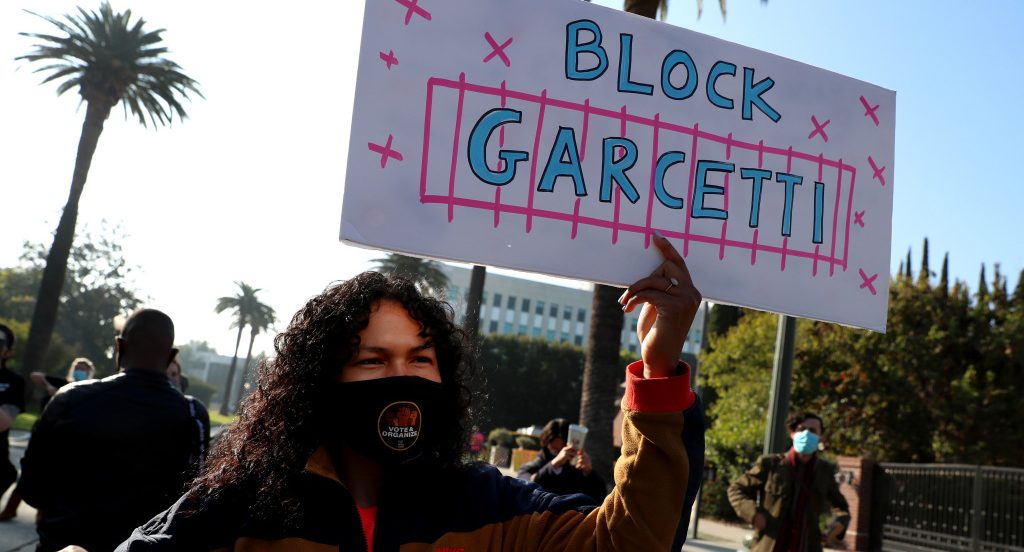 Above photo: Black Lives Matter Los Angeles gathered for a protest outside of Mayor Eric Garcetti’s residence at the Getty House to demand that President-Elect, Joe Biden, not pick him for a cabinet position, in Los Angeles, Calif., on Thursday, Nov. 26, 2020. Trevor Stamp.

Los Angeles, CA – A sixth day of demonstrations outside Mayor Eric Garcetti’s official residence unfolded Sunday in an attempt to persuade President-elect Joe Biden not to appoint Garcetti to his cabinet.

Tabatha Jones Jolivet, a spokeswoman for BLM-LA, said Garcetti “has failed the people of Los Angeles in an unending number of ways — from criminalizing folks for being houseless, to refusing to stand up for people who are killed by his police force.”

“We refuse to be quiet as President-elect Biden considers him for a cabinet post where his reach will extend to setting national policy,” she said.

Black Lives Matter-Los Angeles has vowed to conduct a demonstration every day until Biden commits to not appointing Garcetti to the cabinet.

Various news outlets have speculated that Garcetti is being considered by Biden for a cabinet position.

As of last Monday when reporters asked Garcetti about it during a COVID-19 update, he shared, “I have been focused 110% on these numbers and on COVID and on saving lives.”

Garcetti added, “It’s one of the last things on my mind right now,” he said, adding, “Right now my job No. 1 is to make sure I protect the lives of Angelenos.”