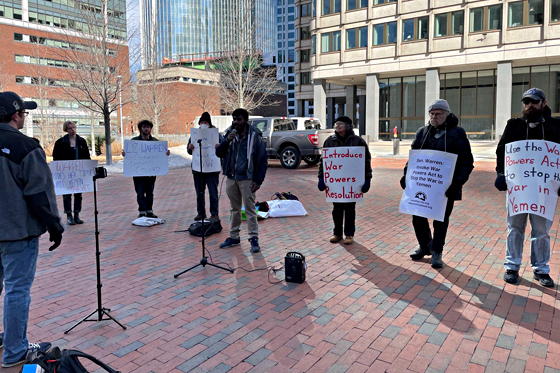 Protesters Highlight Warren’s Hypocrisy On The War In Yemen

On Friday, February 11th antiwar groups United Against War and Militarism, Veterans for Peace, and Massachusetts Peace Action protested at Elizabeth Warren’s office in Boston to demand that she invoke a War Powers Resolution to end US involvement in the nearly 7 year-long proxy war in Yemen. While Warren has expressed nominal opposition to US involvement and voted for a War Powers Resolution while Trump was in office, she has refused to take any concrete action since Biden was elected. All the while, the US and regional and global powers continue to treat Yemen as a battleground in which to contend for power, profits, and influence.

During the Trump administration, some Congressional representatives put forward legislation to block US arm sales to Saudi Arabia and to invoke the War Powers Act, both of which were vetoed by Trump. In the past year many of the same politicians, including Warren, have signed letters appealing to the Biden administration to end support for the blockade and bring an end to the humanitarian disaster in Yemen. None of these same representatives have invoked a War Powers Resolution against their fellow Democrat, Biden, fearful of the consequences such a move would have on their careers.

This is not the first time Warren has acted hypocritically. While Lloyd Austin was being confirmed for Biden’s Secretary of Defense, Warren proudly claimed she would oppose a waiver that would allow Austin, a retired four-star general, to fill a position nominally meant to provide civilian oversight to the military. Yet, when it came down to voting on his confirmation, she voted in favor. This type of posturing and maneuvering amounts to nothing more than political theater.

Warren’s inaction is part of a larger pattern of empty phrases and broken promises from Democratic politicians concerning the Yemen War. Despite the War in Yemen being overwhelmingly unpopular and the Democratic Party holding the House, Senate, and Presidency for over a year now, US support for the Saudi-UAE coalition has continued unabated and the war has intensified.

Angered by these continued atrocities and inspired by the protests held in New York and the Bay against AOC and Ro Khanna, respectively, protesters in Boston tried to enter the John F. Kennedy Building to bring their message to Warren’s office. When they entered, they were met with several security guards and Department of Homeland Security agents. Lacking an appointment, they explained that they would like to convey their demands to Warren, who claims to represent the people of Massachusetts.

After the agents went to check if anyone was in Warren’s office to ask for permission regarding whether or not the protesters could bring their message to Warren, an alleged “public servant,” they stated that no one was in the office. Protesters argued with the agents that it is their right to go to her office and leave fliers and posters conveying their message. The agents responded that they couldn’t allow this because it was against “rules and regulations” and that if they allowed it, everyone would start putting up posters and it would imply the government endorses the message! Similar absurdities have been propagated in Tennessee in response to protests. Tennessee legislators at one point banned “hand-carried signs and signs on hand-sticks” because they “represent a serious safety hazard.” These sorts of absurd rules are part of a larger effort by politicians from both parties to silence dissent and limit free speech, particularly when it is critical of the U.S. military actions abroad.

Careerist politicians who speak out but take no action support and perpetuate the imperialist system upon which the US government rests. Warren and all US politicians have helped to shatter the illusion that Democrats and Republicans differ in their ultimate goals on US foreign policy. As evidenced by the shameful inaction and hypocrisy on US support for the war in Yemen, Democrats and Republicans do not disagree on inflicting suffering on the world to ensure the domination of US corporate and state interests.

Given this reality, it is all the more important to build up a popular movement against the war in Yemen and all US wars abroad. Only by acting ourselves will we force those in power to do more than provide lip service to the people of Yemen and all other people targeted and oppressed by the US government.