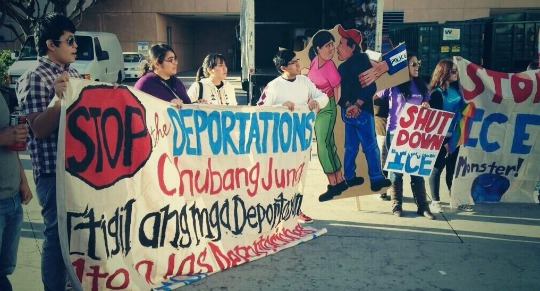 Protesters in DC, LA Call On ‘Deporter-in-Chief’ To Stop

“The House might have closed for the year but ICE will be deporting families on Christmas unless we stop it.”

Photo Gallery Below of LA and DC Protests. Protests build on resistance actions occurring throughout the country.

Bi-coastal demonstrations erupted Monday morning as over one hundred demonstrators in Washington, D.C. and Los Angeles shut down the regional offices of Immigration and Customs Enforcement (ICE) with a message for the “deporter-in-chief,” President Barack Obama: Not one more deportation.

Protesters with the group #Not1More were arrested outside the ICE office in Fairfax, Virginia for blocking a deportation van. In Los Angeles, in front of over one hundred other demonstrators who rallied outside the city’s ICE headquarters, six immigrant youth and allies chained themselves to two 8-foot ladders with U-locks around their necks.

Staged on the first workday after the House of Representatives closed its doors without passing immigration reform, the protesters are hoping to draw attention to the many individuals who will be detained or deported while legislators enjoy their holiday break. After overwhelmingly passing in the Senate, the immigration reform bill has yet to be called up for a vote in the House of Representatives.

“The House might have closed for the year but ICE will be deporting families on Christmas unless we stop it,” explained protester Rosa Lozano of DC. “Blaming Republicans can’t stop the suffering in immigrant communities.”

Singling out President Obama—dubbed the “deporter-in-chief“—demonstrators are demanding that he abolish his “self-imposed deportation quota” of 400,000 removals per year and the “criminalization programs that conscript local police into efforts to meet it,” such as the Secure Communities program.

“For the president to say that he can’t do anything is the biggest lie he can tell the community,” said Blanca Hernandez, who was one of the nine protesters who chained herself outside the ICE office in Fairfax. “During his electoral campaign he said he was ready to take action. I do this to remind him that he needs to keep that promise, and for all the families that continue to be separated, hoping that it stops.”

The protest is the latest in a growing tide of direct actions in cities across the country by immigrants and immigration rights groups.

On November 10, demonstrators in Elizabeth, New Jersey braved falling snow for hours while they laid in a human chain blocking road access to an immigration detention center.

And last month, immigrants, immigrant rights organizers and labor leaders announced the beginning of a “Fast for Families,” during which they vowed to abstain from all food, except water, and erected a tent on the National Mall as a beacon for those who support immigration reform. Thus far over 200 people have fasted in the tent and over 10,000 nationwide have gone without food in a solidarity effort to focus attention on the legislative inaction.