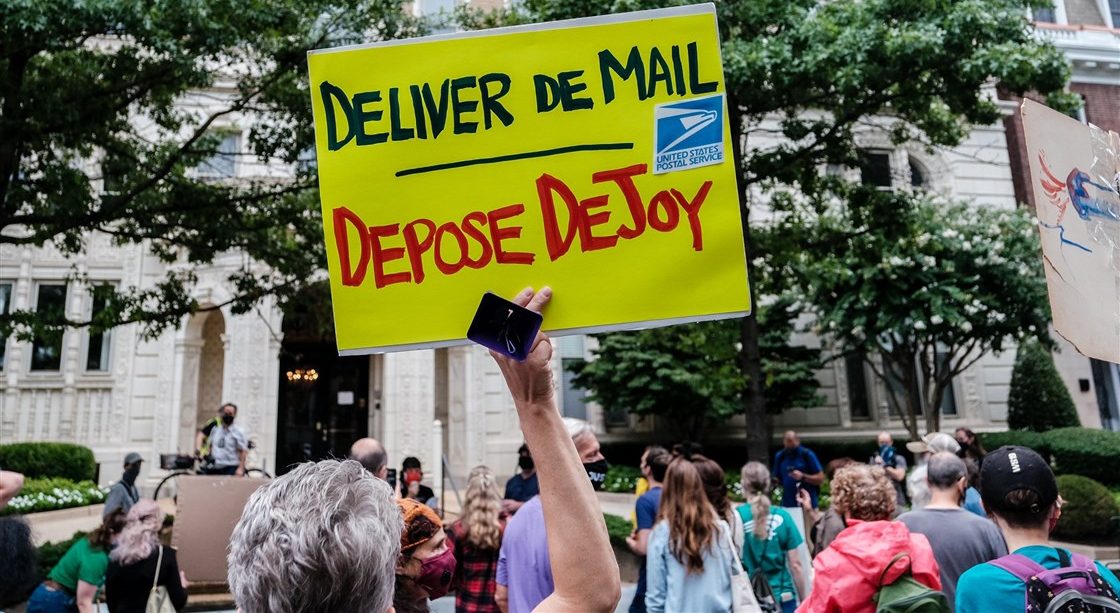 Above photo: Demonstrators gather outside of the condo of President Donald Trump donor and current U.S. Postmaster General Louis Dejoy on Aug. 15, 2020 in Washington, DC. Michael A. McCoy / Getty Images.

Critics say the repercussions of Postmaster General Louis DeJoy’s restructuring could have an outsized impact on the election this year.

Protesters filled the streets outside the head of the U.S. Postal Service’s home in Northwest Washington, D.C., on Saturday, some carrying signs that read “Don’t mess with the USPS” and “Don’t stamp out our democracy.”

The demonstrators blew airhorns and banged pots as a few of them walked to the front door of Postmaster General Louis DeJoy’s building and pinned fake ballots to his front door, as protesters accused him and the White House of working together to undermine main-in ballots and the election.

“Hey hey, Louis DeJoy, the Postal Service is not your toy!” the protesters chanted. It was not known if he was home.

Shutdown D.C., the group that helped organize the protest, said they decided to make a bunch of noise outside DeJoy’s home to provide a “wake up call” to the longtime Republican donor.

“During a global pandemic, the postal service is essential to democracy: Postal workers are literally delivering democracy by safely delivering Americans’ votes,” the group said in a statement. “And Trump appointed DeJoy, a logistics executive, to gut the safest and most accessible way to vote.”

President Trump did not appoint DeJoy, as the postmaster general is selected by the USPS Board of Governors, but the White House did push to have him put in that position.

On Saturday, as talk of the in-recess House possibly returning to Washington to respond to the postal crisis heated up, House Intelligence Committee Chairman Adam Schiff, D-Calif., called on DeJoy to resign.

“The House must demand answers,” he continued. “Hearings should start now. It can’t wait. We won’t let Trump destroy the Post Office.

DeJoy, a Trump ally who has served as postmaster general since May, reshuffled much of the experienced senior leadership in USPS’s organizational chart when he took control of the agency, and he has introduced a number of policy changes that appear to have slowed the delivery of mail.

“He’s trying to streamline the post office and make it great again,” Trump said Saturday as he dismissed questions about whether DeJoy was intentionally trying to delay mail delivery.

Outside of delays for people who depend on the USPS for their mail and packages, critics say the repercussions of DeJoy’s restructuring could have an outsized impact on the election this year.

Many states have allowed voters to turn to mail-in ballots because of the ongoing pandemic. With DeJoy’s closeness to the White House and his decision to ban overtime and additional trips made by carriers to deliver mail on time, protesters said it appeared that DeJoy was trying to help undermine the presidential election in November.

DeJoy has also overseen the decommissioning of 671 of the agency’s letter sorting machines, which can individually sort 35,000 pieces of mail per hour. Another call to action was the USPS’s plan to remove a number of blue collection boxes around the country, but a spokesman said Friday that it would wait until after Election Day and reevaluate its needs.

Concerns, however, grew further on Friday when numerous states reported that they had received letters from the Postal Service in recent days warning them that the agency that oversees mail in the United States will not be able to fulfill requests for mail-in ballots in time for the Nov. 3 election.

NBC News reached out to all 50 states to see whether they had received the USPS letter warning of issues relating to mail-in ballots. Eighteen, including critical swing states like Arizona, Florida and Michigan, shared the letters they received. Vermont, Wisconsin and Kentucky said they did not receive a warning from USPS.

Meanwhile, Rep. Carolyn Maloney, D-N.Y., the chairwoman of the House Oversight Committee, attended a rally in support of USPS workers on Saturday in New York City. She railed against President Trump for holding USPS funding hostage amid ongoing negotiations in Congress over pandemic relief because he is trying to undermine mail-in voting.

Trump said on Thursday that holding up the USPS emergency funding would ensure that the federal agency would be unable to “take all of these millions and millions of ballots.”

“His own postmaster general has come out with a series of proposals that would delay the mail,” Maloney said Saturday. “These changes won’t just disenfranchise voters. It will hurt our seniors, our veterans, others that depend on their medications by mail, their packages, other deliveries. And these delays are also happening across our country.”

Maloney sent DeJoy a 10-page letter along with other Democratic leaders in Congress that asked for more information on the planned changes at hundreds of postal facilities across the country that risk jeopardizing the “integrity of the election.” She also confirmed that the USPS Office of Inspector General would be investigating DeJoy’s policies, as well as whether he violated any federal ethics rules.

DeJoy is slated to speak before Maloney’s committee on Sept. 17. Congress is on recess until September.

The criticism and concern of undermining mail-in voting efforts did not only come from Democrats, however, as Sen. Mitt Romney also emphasized on Saturday that tabulating mailed ballots is essential to preserving American democracy.

“We should make every effort to assure that people who want to vote, get the chance to vote,” he told reporters. “And that’s more important even than the outcome of the vote. We’ve got to preserve the principle of democracy or the trend we’re on is going to continue to get worse.”

Phil McCausland is an NBC News reporter focused on rural issues and the social safety net.