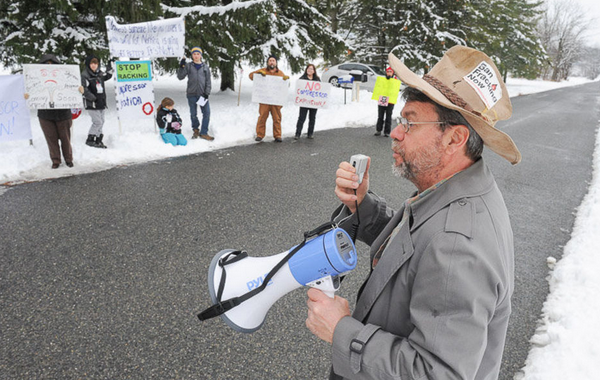 Gene Hunter, of Forks Township, speaks during the protest. Forks Township residents and activists protest Jan. 24, 2015, outside the Columbia Gas compressor station off Klein Road. Residents are rallying against a proposed expansion of the facility. (Tim Wynkoop | lehighvalleylive.com)

About 20 Forks Township residents and activists gathered outside the Columbia Gas compressor station Saturday afternoon in the township’s northern tier to protest a proposed expansion that will more than quadruple the facility’s horsepower.

Lining the road outside the Klein Road facility that moves natural gas to market, protesters held signs declaring “How Long Can You Hold Your Breath” and “Folks Who Favor Fracking Must be Sent Packing.” Some protesters sported gas masks and an armed security guard stood near a car parked in the property’s driveway before moving back behind locked gates.

Pacing the road with a megaphone in hand, Sam Koplinka-Loehr with the Clean Air Council led the group in chants that could be heard echoing over the predominantly rural landscape.

“Columbia, can you hear us?” Koplinka-Loehr said into the megaphone. “We have a message for you. Stop messing with our air.”

The company has said the expansion is necessary to move natural gas from Pennsylvania’s Marcellus Shale formation.

But opponents on hand Saturday criticized the plan, in part, because the area wouldn’t benefit from the natural gas. Companies are expanding facilities and installing new infrastructure only to move the cheap natural gas to more lucrative markets overseas and elsewhere in the U.S., Koplinka-Loehr said.

Residents took turns on the megaphone, complaining about the noise the facility generates, raising concerns about the smell of natural gas it emanates and going so far as to call the company a “neighborhood terrorist.” Tom Church, who urged others to attend township supervisors’ meetings to voice their disapproval, criticized the initial decision to ever allow such a facility in a farmland preservation area.

Koplinka-Loehr urged residents to file complaints with the Pennsylvania Department of Environmental Protection every time they smell natural gas. The Clean Air Council is planning a similar protest Jan. 31 in Milford, Pike County, where Columbia Gas proposes a similar expansion.