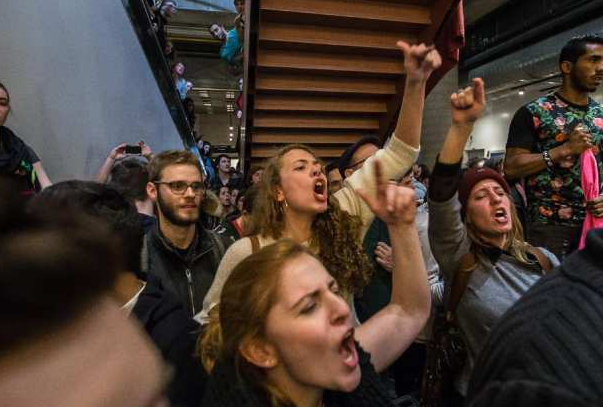 More than 250 students at the Université du Québec à Montréal occupied a building Wednesday night where, during the afternoon, police arrested 21 protesters.

Students scream in support of the protesters that were arrested at UQAM for disrupting classes, a violation of a court injunction, in Montreal on Wednesday, April 8, 2015. The injunction was granted to the university last week forbidding protesters from stopping students who would like to attend classes.

Shortly before midnight, 150 remaining students said they intended to stay the night. Police had massed discreetly outside, but said they had no intention of intervening.

School administrators called for police aid twice during the day to dispel demonstrators who were attempting to disrupt classes.

On their second visit of the day, police arrested 11 women and 10 men at around 3 p.m. During a tense standoff between students and police officers in the basement of the J.-A.-DeSève building on Ste-Catherine St. near St-Denis St., professors stepped in between lines of police officers and students, and managed to defuse the situation. The arrested protesters were taken into custody and detained for questioning at the police station on Guy St.

Four are facing criminal charges of masked protest and mischief, and 17 of the protesters face charges of illegal assembly and mischief, Sgt. Jean-Bruno Latour said. The arrested were age 18 to 36, and police said the accused were to be released Wednesday evening.

Students and protesters who remained behind at UQAM chanted “Liberez nos camarades” (free our comrades) and “Occupons UQAM” (occupy UQAM). About 150 staged a sit-in on the ground floor of the campus later, but did not disrupt classes.

The head of UQAM made no apologies for  calling the police.

“As you know, we are bound to give our courses to the students. It’s an obligation of the university,” rector Robert Proulx told Radio-Canada.

Although the “university is a place of debate,” Proulx said UQAM asked for an injunction “to assure free circulation and free access to classes.”

“We know that a minority of people decided to defy the injunction and showed up at the university … to intimidate.”

“It’s really not in the culture of the university to call the police to help. But when we find a situation like this morning, where the guards were not able to keep the security of the people, I have a responsibility to (the majority of) students who frequent UQAM, who want to move about the university without danger, for their safety … and without having to endure intimidation.”

It was the second police intervention of the day at the school. At about 10:30 a.m., police received a call from administrators and entered the university’s Judith Jasmin building in order to help “restore order.” In what has become a familiar scene, masked protesters had gathered and attempted to disrupt classes shortly after 9 a.m. as part of broader strike action to protest against the provincial government’s austerity measures.

Police did not intervene during the first protest as the demonstrators had dispersed by the time they arrived.

On Tuesday, six classes were cancelled after masked demonstrators showed up and sang, flicked the lights on and off, erased professors’ notes from their whiteboards and mocked anyone who asked them to keep quiet. The private security agents employed by the school did not intervene.

But on Wednesday morning, the school’s security tactics shifted and the guards began actively blocking the protesters’ access to classrooms. Video and photos from the scene showed the confrontation degenerating as guards attempted to snatch umbrellas from protesters. At least one news photographer had a camera damaged by spray paint.

The disruptions are expected to continue, however, despite of an injunction granted in court last week forbidding protesters from stopping students who are trying to attend classes.

Rector Proulx sent an email to students on Wednesday night asking for a calm return to classes.