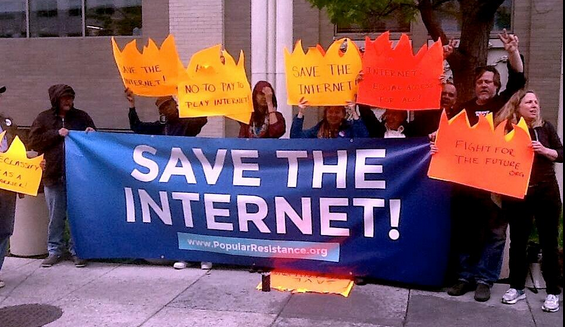 Protesters set up camp outside the Federal Communication Commission (FCC) on Wednesday to fight plans they say will create a two-tier internet and hand control of the web to major corporations.

The rally – reminiscent of the Occupy-style rallies that started in 2011 – started outside the FCC’s Washington headquarters at noon with protesters from Fight For the Future, Popular Resistance and others unfurling banners reading “Save the Internet”.

Protesters then announced they intend to camp out outside the FCC until 15 May when the regulator is expected to announce new rules for the internet that will formalise plans for higher speed internet for those able to pay for it.

Public interest groups have become increasingly concerned that the new rules will end “net neutrality” – the concept that all internet traffic should be treated equally on the web. FCC chairman Tom Wheeler has defended his plans for what he calls the “open internet”.

The future of net neutrality has effectively been in limbo since a federal court struck down most of the FCC’s open internet order in January in a case brought by Verizon. The loss paved the way for fast lanes that have the major broadband providers have lobbied hard for, and for which they plan to charge extra to their biggest users.

“We don’t have armies of paid lobbyists at our disposal but we can not let the freedom of the internet be hijacked by giant monopolies,” said Evan Greer of Fight For The Future.

More than a million people have now signed petitions to the FCC calling for them to enshrine net neutrality rules and prevent a tiered system.

A group of 86 organizations, including the American Civil Liberties Union, Free Press and Reddit, are asking the FCC to reclassify broadband companies as “telecommunication services”, which would give the commission the authority to impose net neutrality rules on them.

“The Internet will remain like it is today, an open pathway,” Wheeler wrote in a FCC blogpost in April. “If a broadband provider (ISP) acts in a manner that keeps users from effectively taking advantage of that pathway then it should be a violation of the Open Internet rules.”

Critics charge, however, that cable firms will successfully challenge any new rules to tie their hands unless the FCC’s regulatory control over them is increased and point out cable firms have already effectively created a two-tier system. After the FCC lost to Verizon in January, a tiered system has already started to emerge with Netflix and others striking deals for a faster service with cable firms.

“The internet is as necessary to our society as shelter and water, people should have equal access to it,” said Greer. “We have seen an unbelievable amount of support from people since these new rules emerged. It may seem technical but it affects everyone’s life and people are not going to just stand by and let this happen.”