Above: Protests urging net neutrality under Title II were outside of Ajit Pai’s Arlington home on May 14, 2017. Photo by Anne Meador, DC Media Group.

Pai Needs to be Personally Protested Because He Comes to the FCC With a Personal Agenda.

Despite public opinion and the facts, he intends to serve the Telecom Industry. Pai is behaving like he is still Verizon’s lawyer, not someone required to serve the public interest.

Arlington, VA – Ajit Pai, the Chair of the FCC, is on a mission to destroy the Internet by reclassifying it so that it is no longer a common carrier where we all have equal access and repeal net neutrality rules so Comcast, Verizon and A&T can discriminate based on content.

Net neutrality activists began a vigil at the FCC chairman’s home in Arlington on Sunday, May 14 to protest. They will continue on Monday, Tuesday and Wednesday until the public meeting at the FCC on Thursday, May 18. Twenty people stood outside of his home holding signs urging “Save The Internet,” “We Want Democracy Not Net Monopolies,” “Ajit Pai Stop the Lies” “Protect the Internet” and “Equal Access for All.”

The protest was supported by every neighbor who spoke to them, one even offered the use of their bathroom if net neutrality advocates needed it. Three of the participants were from the neighborhood and attended because the week before they found a door hanger describing Ajit Pai and the issue on their front door. The door hangers were placed on 200 doors in Pai’s neighborhood so when the protest occurred,people would understand what was happening.

Pai has made it clear in public statements that he intends to repeal the Title II classification of the Internet as a common carrier. He also intends to repeal net neutrality rules that allow regulation so that there can be no discrimination in access to content on the Internet. The former Verizon lawyer is acting in the interests of his former employer and other big telecoms rather than in the public interest. He is announcing what looks like a sham public comment proceeding on May 18 since he has already announced his decision. It is going to take an overwhelming mobilization of people to prevent him from destroying Internet freedom.

The Internet has been a vibrant tool for innovation, creativity, free speech and independent media and an engine for the economy because there is equal access. Under Title II, as it is currently classified, the Internet is a common carrier like electricity coming to your home. Title II is also essential for putting in place net neutrality rules as the DC Court of Appeals ruled when Verizon sued the FCC in 2014. Net neutrality is the idea that access to the Internet should not be based on content. If the content is legal then it should be treated like all other content on the web. Preference cannot be given to sites whose content is approved by the Internet Service Providers, e.g. Comcast, Verizon and AT&T, and corporations and people cannot purchase better service than others. Equal access for all is the current rule and we must protect it.

Complicating the issue further is that Internet Service Providers are rapidly becoming Internet content providers too. Comcast now owns NBC/MSNBC, AT&T is seeking to purchase CNN, Verizon owns Huff Post. AT&T already owns the largest pay-TV provider in the US thanks to last year’s purchase of DirecTV.  If the ISP’s are able to discriminate based on content, then they can prioritize their content and suppress others’ content. This sets us on a path towards monopolization and consolidation of the Internet as commercial media is now.

The critical issue for our future is to keep the Internet competitive and creative, where innovators in products, services and political thought have a place where they can break through and help lead humankind to advance. The telecom corporations, with their well-paid spokespeople like Grover Norquist, are putting out a fog in order to increase their profits and take advantage of the Internet. Here are some thoughts to consider:

– “Start-ups for Net Neutrality” is 1,000-member group of start-up businesses that have written to Commissioner Pai urging him to keep net neutrality and Title II. They see it as essential for allowing new businesses to compete, to be able to put out their product or service and get a niche in the economy and be able to challenge existing businesses. In their letter to Pai they write, after applauding efforts to create a faster Internet, that:

We also depend on an open Internet—including enforceable net neutrality rules that ensure big cable companies can’t discriminate against people like us. We’re deeply concerned with your intention to undo the existing legal framework.

Without net neutrality, the incumbents who provide access to the Internet would be able to pick winners or losers in the market. They could impede traffic from our services in order to favor their own services or established competitors. Or they could impose new tolls on us, inhibiting consumer choice. Those actions directly impede an entrepreneur’s ability to “start a business, immediately reach a worldwide customer base, and disrupt an entire industry.” Our companies should be able to compete with incumbents on the quality of our products and services, not our capacity to pay tolls to Internet access providers.

The same is true for entrepreneurs and small business. They need an open Internet accessible equally to all in order to compete, innovate and succeed. No person or business should be paying tolls for better Internet service.

– The same is true for media. Pai is also allowing big mergers so the already concentrated corporate media is getting more concentrated. Upcoming is a merger between AT&T and Time Warner, which includes CNN and HBO. If Comcast — who owns NBC/MSBC is legally allowed to regulate access to the Internet by content, what will this mean for alternative, independent and non-profit media — or to social media — that challenges the narrative of the corporate mass media? They can throttle other views and without net neutrality it will be legal. Think of the Internet as a mall where the owners allow you in but puts the stores they own closer to the entrance and places obstacles in the way of getting to their competitors. That would be the opposite of a competitive market. It would be a closed market controlled by a corporation. 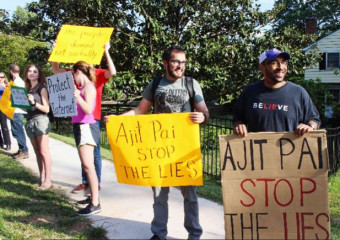 – In the future ISP’s that own MSNBC , CNN and other media will have the power not to allow competitive news sources or advocacy news sources to stream live on their broadband networks. If the ISP’s have the choice to shut down independent news sources that compete with them for viewers, they will. That is what is coming. The Internet will be more of a tool for big media (and government) propaganda and shut down the vibrant free speech that a wider media is allowing to occur.

Unfortunately, because the telecoms choose not to compete with each other, most people do not have a choice of provider. They are in Comcast, Verizon or AT&T territory so they have nowhere else to go. That is why they get away with overpriced access, lousy service and slow Internet speeds compared to the rest of the world. It is also why they are among the most unpopular corporations in the country. Monopolies do not need to create faster Internet like the rest of the developed world has, and they will not need to be content neutral or allow equal access to all if Title II net neutrality rules are repealed. Don’t let that happen. Act now to protect our Internet.