Above Photo: Davis Shoulders, center, dances as Rise Up! Action Band member Adrienne Kerr plays the saxophone on Wednesday, November 1, 2017, during a rally at City Hall in Seattle. Click or tap on the first image to see more. KUOW PHOTO/MEGAN FARMER

Activists packed Seattle City Hall Wednesday night to testify in front of lawmakers and demand an end to the removal of unauthorized homeless camps.

Many of those who spoke also support a proposed business tax that would raise funds to help combat homelessness.

As the council considers the 2018 city budget, amendments have been proposed to achieve both goals. But whether the provisions will receive enough support to make it into the final budget is questionable.

Emily McArthur is a member of the Housing for All coalition, one of the groups that organized Wednesday’s protest.

She said there’s a lot at stake as council members decide what to include in the final budget.

“It’s not just people sleeping outside, which you could wring your hands about and feel morally bad about, but 66 people have died just so far this year. So there’s a body count to ‘business as usual politics,’” McArthur said.

One after the other, dozens of people stood to tell council members that the city’s practice of evicting people from unauthorized tent camps is harmful.

“What little stability you have is ruined. And we put them closer to death by doing that,” Thompson said. 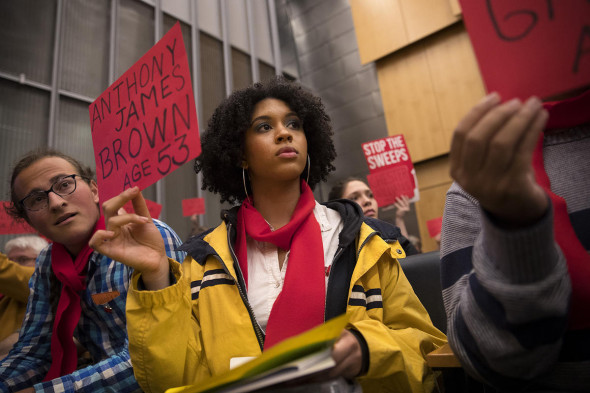 Vivian Brannock holds a sign with the name Anthony James Brown, a homeless man who passed away, during a public hearing on Wednesday, November 1, 2017, at City Hall in Seattle.
CREDIT KUOW PHOTO/MEGAN FARMER

His testimony came just hours after mayor Tim Burgess sent a memo expressing concern over a budget proviso, proposed by Councilmember Kshama Sawant, which would de-fund and halt camp removals with limited exceptions.

Burgess was joined by the heads of Seattle’s police, fire, and human services departments in registering his concern.

The memo states: “Blocking unauthorized encampment removals will create an elevated public health and safety risk to the people of Seattle. Many of the estimated 400 unauthorized encampments inside the city presently pose health and safety risks to the residents of these encampments and adjacent neighbors. The city government cannot ignore or tolerate these risks. To do so would be to abdicate our obligation to maintain a safe and peaceful city.”

Gretchen Taylor with the Neighborhood Safety Alliance told the council she agrees.

“We believe that allowing the proliferation of unrestricted camping throughout the city of Seattle poses dangerous risks to those who camp… and to the safety of all citizens,” she said. 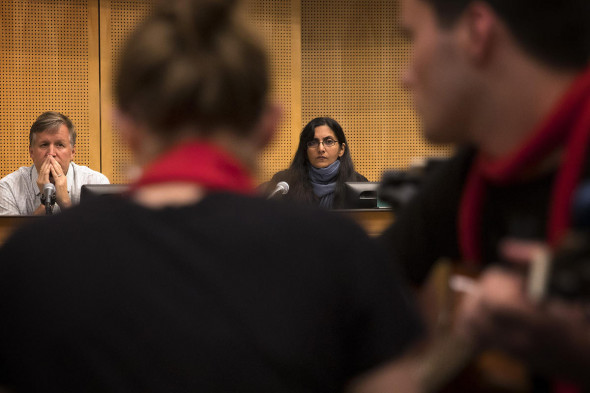 Activist and former Seattle journalist Casey Jaywork responded directly to the community groups who had gathered to support mayor Burgess’ proposed budget and the continued removal of unauthorized tent camps.

“I wanted to let you know, with the greatest respect, that the reason I’m here testifying like this is because your policies will kill my friends,” he said.

The hours long flood of testimony comes as the city marks two years since a state of emergency was declared on homelessness.

Councilmember Sawant and activists marked the anniversary by camping out at City Hall overnight. 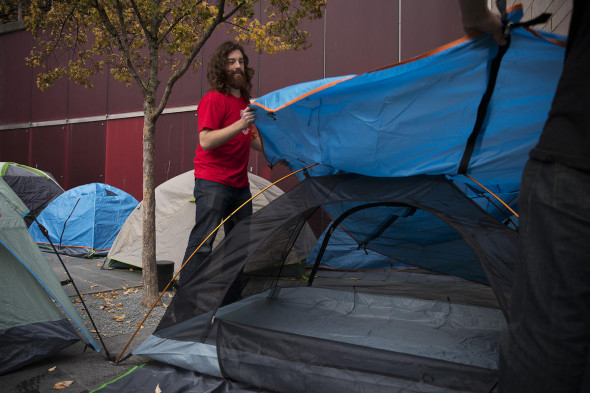 Chuck McKeever, left, sets up a tent on Wednesday, November 1, 2017, outside of City Hall in Seattle. “What we’re doing out here today is bridging the gap between housed people and unhoused people,” McKeever said.
CREDIT KUOW PHOTO/MEGAN FARMER

Sarah Champernowne said literally occupying space at City Hall sends a message that residents of Seattle won’t stand for a continuation of business as usual.

“We need to bring these struggles into City Hall so that they’re visible and so that people can see us demanding that the City Council vote to end the sweeps and build public housing,” she said.