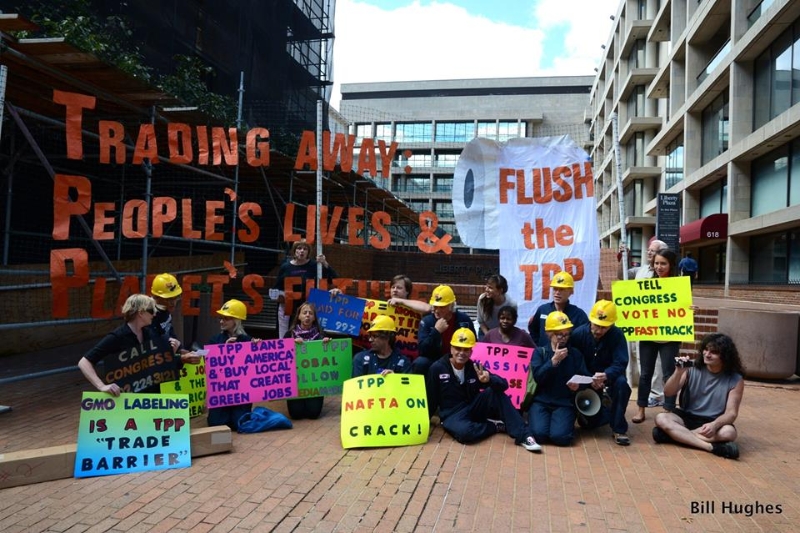 Above: Anti-TPP activists pose after their successful protest drapped the US Trade Representative with four massive banners. Photo by Bill Hughes.

Protesters Demand Transparency for the Trans-Pacific Partnership at Office of the U.S. Trade Representative with Banners, Lockdown

Washington, DC – This afternoon, September 23rd, protesters concerned about the looming Trans-Pacific Partnership (TPP) covered the Office of the U.S. Trade Representative with banners calling for a democratic process and a release of the treaty’s text. The group, which included members of FlushTheTPP.org, Backbone Campaign, Veterans for Peace, CODEPINK, and Earth First!, say that the TPP will have vast consequences for U.S. laws, workers rights, the environment and many other aspects of life.

We decided to expose these secret negotiations by going right to their national office and plastering the Office of the US Trade Representative with messages that let them and the public know what they are doing. We took over their office building today, and plan to continue to escalate tactics in Congress and wherever we see opportunities to expose the TPP, stop the undermining of democracy through Fast Track and have a real debate over whether the US wants rigged trade for big transnational corporations or fair trade that puts people and the planet before profits.

So far, the TPP has been drafted with an unprecedented degree of secrecy. While information has been kept from the public more than 600 corporate advisers have access to the treaty’s text – including companies such as Halliburton, Monsanto, Walmart, and Chevron. The Obama administration has kept the TPP classified, making it the first-ever classification of a trade agreement. In addition to denying public access to its text, the president has urged Congress to use Fast Track to pass the treaty. Fast Track would limit congressional consideration of the text to a quick up or down vote and give President Obama the power to sign and negotiate the treaty. This turns the Constitution on its head as the Commerce Clause authorizes Congress to “regulate commerce among nations” not the president.”

Seven advocates dressed as workers attached four massive banners to the front and side of the US Trade Representative’s office. Banners read “Transparency: Release the Text,” “Democracy, not Corporatocracy,” “Corporate Coup against the People and Planet” and “Flush The TPP.org.”  Other activists at the front of the building held a large 15 foot tall sign that said: “Trading Away People’s Lives and the Planet’s Future.”  They were able to cover the building in banners and hold this un-permitted protest and negotiate doing so without anyone getting arrested, in fact one activist who had been held in handcuffs was even released.

Margaret Flowers, MD, who dressed as a workman to attach a sign to the front of the US Trade Representative said that “the TPP will undermine health care systems, make pharmaceutical drugs and medical devices more expensive and therefore increase pain and suffering and even cost people their lives.” Flowers an advocate for a national health care plan that treats health care as a human right rather than a commodity warned that “The TPP will undermine the excellent single payer health care systems in Japan, Australia and New Zealand and make it more difficult for the United States to put in place a single payer system — which is what most Americans and doctors want to see.”

The protesters join Senator Elizabeth Warren (D-MA), Rep. Alan Grayson (D-FL), Rep. Michelle Bachman (R-MN), Rep. Walter Jones (R-NC), and many others who are opposing Fast Track and calling for the text’s immediate release. Earlier this summer, Rep. Grayson stated that, “this, more than anything, shows the abuse of the classified information system,” calling the treaty an “assault on democratic government.” Sen. Warren noted in her letter to U.S. Trade Representative Ron Kirk, “if transparency would lead to widespread public opposition to a trade agreement then that trade agreement should not be the policy of the United States.”   Groups of Republicans and Democrats are beginning to speak out against Fast Track, the lack of transparency and the TPP.  Just as the war against Syria was stopped by a cross-partisan coalition, such a coalition can stop the TPP. Indeed 14 trade agreements have not become law in the last ten years because of citizen opposition preventing countries from reaching agreement.

An agreement that will empower corporations to dominate every aspect of our lives — food, water, health care, wages, jobs, Internet and more — should be debated openly and transparently.  The United States is supposed to be a democracy; acting in secret to create the largest trade agreement in history makes a mockery of democracy.  Minimizing the checks and balances between the Congress and president undermines the Constitution.  And, giving away U.S. sovereignty to transnational corporations is the opposite of a country of, by and for the people.

While the full content of the treaty remains unknown, public opposition to what little has been leaked is growing. We are confident the TPP can be stopped, if people know what is in  the agreement. They are keeping this agreement secret because they know its contents are so unpopular. People remember the negative impact of NAFTA, the TPP is NAFTA on steroids and will do great damage to working people all over the world as well as to the environment.

A new report from the Center for Economic Policy and Research finds that the TPP will produce small economic growth of only 1/10th of 1 percent per year, but it will hurt working Americans as 90 percent of workers will see their income reduced as a result of the TPP. Unions including the Communication Workers of America, AFL-CIO and Teamsters have raised serious concerns about the TPP’s impact on working families, and doctors have also highlighted consequences for access to healthcare and life-saving medicines.

Resistance is not limited to the U.S. alone. Other members of the treaty, including Japan and Malaysia, have seen significant public demonstrations in opposition to the agreement, while the lead negotiator from Chile, Rodrigo Contreras, resigned earlier this year citing concerns that the treaty would restrict Chile’s ability to shape public policies, control financial institutions and address issues of health, education, and development.

One protester from FlushTheTPP.org, who locked himself to Margaret Flowers on top of the building’s scaffolding, has firsthand experience with how transnational corporations control and design free trade agreements like these. Steven Bray decided to quit his job after his former employer, Caterpillar, sent the entire company a link to an automated message in support of the U.S.-Colombian Free Trade Agreement. “When I learned how many of my coworkers responded without actually considering the text and its potential consequences, I couldn’t stand it. This made the voice of one CEO sound like the voice of 10,000.” The Colombia trade agreement has had a serious negative effect on farmers and workers in Colombia and has resulted in massive nationwide protests.

Protesters promised to escalate their tactics if President Obama continues to undermine the Constitution, transparency, and democracy. On Tuesday, the protesters will crash a Fast Track train into Congress after driving it across the city from the US Chamber of Commerce at 11 AM.