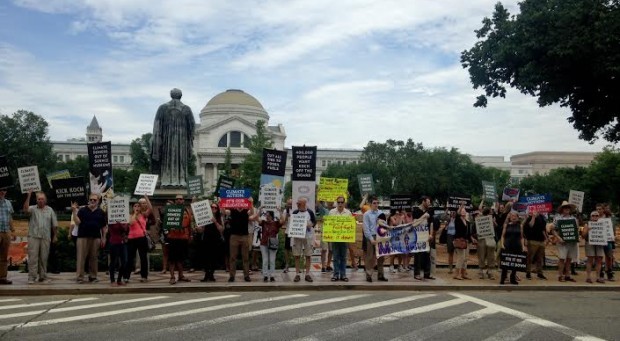 All photos by Lee Stewart.

WASHINGTON, DC – While the Board of the Smithsonian met at the Smithsonian Institute Building during the height of DC’s midday heat on Monday, over 100 protesters picketed outside after delivering 430,000 signatures to Smithsonian Press Secretary John Gibbons demanding David Koch be kicked off the Board.

The petition delivery comes after the release of an open letter signed by the world’s top scientists, including several Nobel Prize winners, calling on museums of science and natural history to cut all ties to the fossil fuel industry. The letter specifically mentions the Smithsonian National Museum of Natural History in DC, where David Koch, a notorious funder of climate change denial, sits on the Board, is a donor, and sponsors exhibits.

“Museums of science and natural history are indispensable public spaces for the transmission of knowledge about the world we live in,” said Beka Economopoulos, co-founder of The Natural History Museum, host of Monday’s demonstration as well as Moral Action on Climate. “They are among the most trusted sources of information. But when these institutions have significant ties to the world’s biggest polluters, or ignore the massive impact of the fossil fuel industry on the continuity of the earth’s many species, we are forced to question whose interests they serve. When museums cozy up to climate deniers and fossil fuel companies, they risk undermining the faith and trust they’ve earned through years of dedicated service.”

The Smithsonian National Museum of Natural History houses an exhibit called The David H. Koch Hall of Human Origins. The exhibit features an interactive game that prompts visitors to explore the ways humans might physiologically adapt to climate change. Joe Romm, a climate scientist who spoke at the demonstration, referred to the game as misleading and grotesque. It frames climate change and increasing levels of CO2 in the atmosphere as part of natural climactic cycles, completely ignoring the role of fossil fuels, and suggesting humans can easily evolve to deal with it. Some protestors held signs that said “Hall of Human Origins: Fix It or Take it Down.”

The Natural History Museum aims to counter what’s happening at places like the Smithsonian by modeling a museum of the future, one that has no ties to the fossil fuel industry and champions a sustainable and equitable future. The museum has exhibits, educational workshops, and public programming that highlight the socio-political forces that shape our world, including how the fossil fuel lobby influences our understanding of climate change. These programs appear within existing institutions, in their mobile museum bus, and online at http://TheNaturalHistoryMuseum.org.

In addition to calling out David Koch, the protestors also called for the firing of staff scientist Willie Soon, who took $1.25 million from the Koch Brothers, Exxon Mobile, Southern Company, and the American Petroleum Institute. Soon denies the role of fossil fuels in climate change and says it’s driven by the sun. “Fire Willie Soon! Fire Willie Soon,” was a chant that often erupted from the gathered protestors, who eventually reassembled in front of the Smithsonian National Museum of Natural History for speeches from Economopoulos, Romm, and Reverend Lennox Yearwood, president of the Hip Hop Caucus. The event ended with original climate-change related music by Robert Miranda.

The Natural History Museum is both a campaign and a counter-institution, noted Economopoulos. “Through exhibitions and programming we tell a sort of ‘people’s history of natural history,’ she said. “As sites that both represent and supply basic societal infrastructure, museums of science and natural history are not just necessary; they are worth fighting for.”