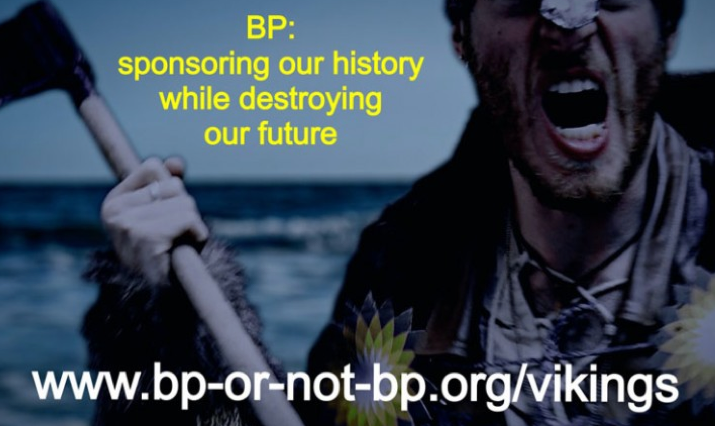 Campaigners for ethical arts funding will hold “flash-horde” protest
to “give BP a Viking funeral” at Viking exhibition sponsored by the oil company.
Over 100 people have already pledged to attend the June 15th protest.

Theatrical protest group the Reclaim Shakespeare Company have announced plans for a mass “Viking invasion” of the British Museum to challenge BP’s sponsorship of the popular Vikings exhibition.

The public are invited to join the protest, planned for Sunday June 15th at 3pm. According to the group’s website:

“We are planning to bring a longship into the Great Court of the Museum, in order to give BP a Viking funeral. This is obviously completely impossible, but we’re going to do it anyway.”

Anyone wishing to join the protest is invited to email info@bp-or-not-bp.org for more information, or to sign up to the Facebook event. Over 100 people have already committed to joining the June 15th “flash-horde”.

This announcement is the latest in a series of performance protests by the group, who have also made a spoof Viking film based on the exhibition’s promotional trailer, launched a petition calling for an end to the British Museum’s BP sponsorship deal, and invaded the Museum itself three times whilst dressed as Vikings and Norse gods. The largest of these performance, on April 27th, was watched by hundreds of Museum-goers and was the subject of in-depth coverage by Channel 4 News.

The British Museum continues to defend its controversial sponsorship relationship with BP, despite the Deepwater Horizon drilling disaster, the company’s decision to start extracting highly polluting and destructive tar sands oil in Canada, its enormous contribution towards climate change, and its recently-announced partnership with Russian state-owned oil company Rosneft in order to exploit the hazardous and vulnerable Arctic.

BP provides less than 1% of the British Museum’s annual income. The company receives a large amount of high-profile branding in return, as well as the use of the largely publicly-funded Museum for its corporate events.

Pressure on cultural institutions to consider the ethics of their sponsorship deals is currently high. The veteran human rights campaigner Archbishop Desmond Tutu recently said “People of conscience need to break their ties with corporations financing the injustice of climate change”. Following months of pressure, the Southbank Centre suddenly ended its long-running sponsorship deal with Shell earlier this year. Pressure is also growing on the Tate over its refusal to reveal details of its BP funding, and last month, a new group called “BP Out Of Opera” (BOOO) performed a surprise flashmob dance against BP sponsorship at a Royal Opera House screening in Trafalgar Square. Meanwhile, campaigners from the Reclaim Shakespeare Company believe that their onstage protests contributed to the recent downgrading of BP’s sponsorship of the Royal Shakespeare Company. 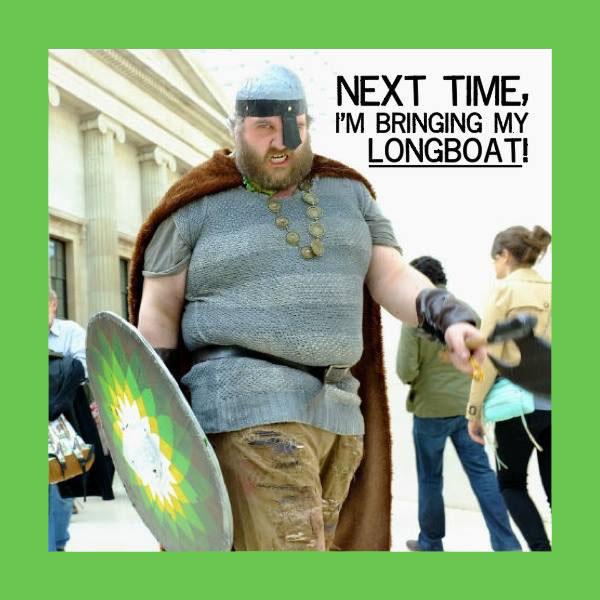 “On Sunday June 15th, theatrical protest group the Reclaim Shakespeare Company will be invading the BP-sponsored British Museum with a piece of mass interactive theatre.

We want you to join us in this grand finale to our latest series of pop-up protests, targeting the Museum’s heavily BP-branded Vikings Exhibition.

With your help, we are planning to bring a longship into the Great Court of the Museum, in order to give BP a Viking funeral. This is obviously completely impossible, but we’re going to do it anyway

No experience of ship-building or transportation is required, and there will plenty of roles that don’t require heavy lifting.

All you need to do is email us on info@bp-or-not-bp.org. We’ll send you a short message with some simple instructions for your part in the performance. Learn these instructions and then be in the Museum at the appointed time to join the horde. You don’t need to dress as a Viking (although this is obviously encouraged). You can also “join” our Facebook event.

Why protest about BP?

BP has a long-running financial relationship with the British Museum. The oil giant even has a lecture theatre named after it. Now it is sponsoring an exhibition about the Vikings, some of history’s most famous plunderers of wealth and resources (so nothing ironic there then).

BP recently launched several highly polluting tar sands extraction projects in Canada, trampling over the rights of local Indigenous people. US Gulf Coast communities have been left devastated by BP’s Deepwater Horizon spill, and the company is now eyeing up highly risky drilling options in the Arctic. At the same time, BP is lobbying against environmental laws and blocking clean energy alternatives all over the world. It’s not surprising that the company likes to throw a bit of money at arts and culture to help distract us from its real activities.

It’s shameful that the Museum is letting BP get away with it. By providing a tiny percentage (less than 1%) of the annual income of the British Museum, BP gets a huge amount of positive publicity in return, helping it to present itself as a responsible member of society rather than the oily berserker it really is.

BP is only sponsoring our history to help it get away with destroying our future.

Help remove the taint of destruction from our national treasures– join us as we tell the British Museum to end its sponsorship deal with BP! Just email info@bp-or-not-bp.org to sign up for June 15th.

Here is a film of our recent surprise Viking performance at the British Museum:

And here’s a film of the public flash-mob performance we held at the BP-sponsored Shakespeare exhibition at the British Museum in 2012: