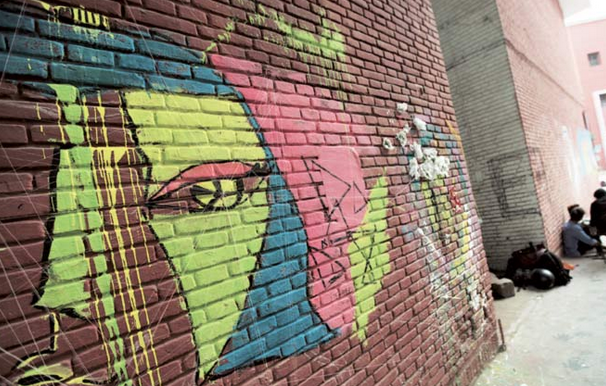 Graffiti and paintings on the walls of the College of Art. (Source: Tashi Tobgyal)

Threads criss-cross a patch of a wall like a colourful cobweb gone chaotic. Through the artwork, a third-year student of Applied Art, Aditya Verma, is registering his protest against the College of Art, Delhi. “Look at the base of this wall, it is cracked like the system here. The college covers the crack with paint but does not repair it. My threads may be weak and break, but they sure as hell can highlight the problem of the crack,” said the 21-year-old.

Students of the college have been on strike since August 31 to demand better infrastructure, equipment, staff and sanitation facilities, among others. Since Tuesday, the 16th day of the protest, the students have been “occupying” the campus the way only artists can — by covering the walls and pathways with graffiti. The college authorities called in the police, but as one protester said, “The police realised we were non-violent…They took our pictures and went away.”

Nitish Arora, third-year student of Applied Art and among the nine-member delegation that is representing the students, said, “On Sunday, we went to meet the chief minister, but his PA didn’t even give us an appointment. When we announced this to the students waiting outside, one of them got down to make a protest graffiti in front of the office, on the road. We returned to the college and decided that the only way to make our voices heard was through art,” he said.

Out came the brushes, immersions, solvents and paint as well as material such as thread, cellophane sheets and tissue papers that turn into “multi-media” in the hands of artists. At the gate of the college hangs a sculpture of a cage containing brushes caked in paint, the base tinctured with red to resemble blood. The road is covered with hundreds of black palm-prints and large-scale paintings of tight fists and slogans of protest. There are dreamy flights of inspiration, too. Finely patterned faces and figures in the Warli style cover the steps of the Administration Block; across the road, ‘Revolution’ is spelled out in thick white paint.

All over the campus, the walls are bursting with a number of art styles, from caricatures drawn from films such as Despicable Me to nudes to portraits to iconography to typography.