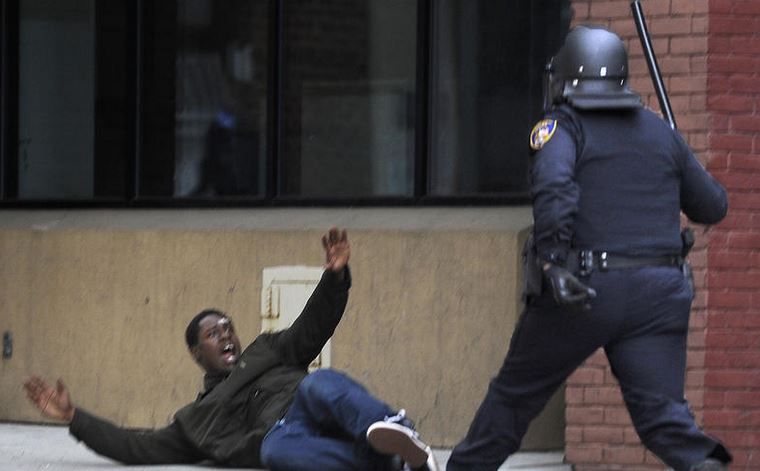 Above: Scene from the day of Freddie Gray’s funeral. Source the Baltimore Sun.

Anger boiled over in Baltimore as the funeral of Freddie Gray seems to have put the city over the breaking point. As we reported on Saturday, the violence and property damage began at the end of Sunday’s protests at Camden Yards where protesters had conflicts with baseball fans who had been drinking. At the request of Gray’s family, things calmed down after that, but after the funeral, many lost control. These riots were not planned by protest leaders but seem to have happened spontaneously.

The reality is this has been building from generations of gross neglect in very poor communities. Fifty years ago Rev. Dr. Martin Luther King, Jr. said that a “riot is the voice of the unheard.” These riots have been building from the era of Dr. King.  David Simon, the writer of the HBO series The Wire, got it right when he wrote on his blog:

Yes, there is a lot to be argued, debated, addressed.  And this moment, as inevitable as it has sometimes seemed, can still, in the end, prove transformational, if not redemptive for our city.   Changes are necessary and voices need to be heard.  All of that is true and all of that is still possible, despite what is now loose in the streets.

But now — in this moment — the anger and the selfishness and the brutality of those claiming the right to violence in Freddie Gray’s name needs to cease.  There was real power and potential in the peaceful protests that spoke in Mr. Gray’s name initially, and there was real unity at his homegoing today.  But this, now, in the streets, is an affront to that man’s memory and a dimunition of the absolute moral lesson that underlies his unnecessary death.

As  Rev. Audette Fulbright said on his Facebook page: “…there has been a State of Emergency way before tonight in Baltimore City, an emergency in poverty, lack of jobs [and] disenfranchisement from the political process.” Transformation is long overdue in Baltimore.  Antwion Robinson, 26, said the outburst had been building. “They are killing us,” Robinson told the Baltimore Sun. “They are actually killing us, and then they make this seem like we’re out of control. But they’re killing our neighbors and brothers. We’re just supposed to sit back and take that?”

Baltimore policing has been abusive for a long time. The reign of Martin O’Malley as mayor set a tone of arrests without probable cause that still continues. During O’Malley’s tenure tens of thousands of young African American men were arrested, held over night in jail and then released without having any charges filed against them. During his time as mayor arrests in Baltimore soared, reaching 108,447 in 2005, or about one-sixth of the city’s population. He and the city were sued and reached an $850,000 settlement for the mass arrests without cause policy. No probable cause has been given for the search and arrest of Freddie Gray. A public defender with ten years experience writes in the Baltimore Brew that the judiciary condones this policing with impunity writing: “Police can get away with filing false reports, tampering with evidence, committing perjury and using excessive force because most judges don’t stand in their way” and he can writes he can barely remember a police officer being reprimanded for illegal actions.

Hopefully the riots subside and people began to work for the radical changes that are needed. Abusive police, who were under investigation by the US Department of Justice before the death of Gray and who have been sued hundreds of times for abusing people in Baltimore, are part of a system of controlling people who should be angry at the injustice they suffer every day. Numerous schools and community centers have been closed. The city is in the process of turning off the water of 25,000 homes at a rate of 150 per day. These are just a few of the recent examples of unfairness people are suffering. When I hear the media reporting gangs are threatening the city, I can’t stop from thinking, police gangs have been threatening these neighborhoods for years. And when the media is surprised at the lack of respect many in Baltimore have for the police, I wonder why they are surprised.

If the city wants to see peace brought back to the streets without more police violence to suppress people, they should treat the six police officers involved in the killing of Freddie Gray like they would treat others involved in a gang murder. Gray was fine before he was arrested for no good reason and had a broken neck after he was arrested. The only people that touched him were the police. All six were accomplices to killing Gray and should be not out on paid leave, or paid vacation as many in the neighborhoods describe it. Of course, they should get a fair trail, but other people involved in a gang killing would be in jail awaiting trial. The injustice of these six police not being treated like other defendants is a key to making the Freddie Gray killing a source of violence that has very deep roots.

Below are tweets about the days events to give you some sense of what is going on but be careful of trusting corporate media reporting.  As bad as the Freddie Gray case is, this is much bigger than one police killing.

Freddie Gray was remembered ahead of his funeral as an easy-going man with dreams http://t.co/GOYPgJp13L pic.twitter.com/f8Flo95CQS — The New York Times (@nytimes) April 27, 2015

Baltimore resident: “This is nothing compared to what’s going to happen.” http://t.co/edtrJaapCc pic.twitter.com/zmqbWybgpU

“To see who is looking to riot, see who came dressed for one” #JusticeForFreddieGray #Baltimore pic.twitter.com/hi3v8PPhYI

Report: Officers have been injured in Baltimore protests over the death of #FreddieGray http://t.co/krRzXTftd2 pic.twitter.com/1oWQEjOnhl

All the hair on my body just stood on end. RT @_CaptainJohnson: Such a powerful shot. #FreddieGray pic.twitter.com/syzLlXoUXY

PHOTOS: Scenes from #Baltimore as the city is consumed by riots after #FreddieGray‘s funeral http://t.co/wSIy6G00Mr pic.twitter.com/IYtFgyU8y2 — Newsweek (@Newsweek) April 27, 2015

When you let 6 thugs with badges walk away from murdering an American citizen this is what happens. #BaltimoreRiots pic.twitter.com/oINFXNklyB — JamesFromTheInternet (@JamesFTInternet) April 28, 2015