Protests Against US Militarism And Attack On Syria

Protests were held on Saturday, April 14, across the United States and in some countries around the world against US militarism. The protests had a special focus on the US aerial attack on Syria, which occurred the night before. More protests are being held today.

The US aerial bombardment was protested as illegal under the US Constitution and domestic law. The president, under the Constitution, cannot declare war; only Congress has the power to do so. Just a few hours before the attack, 88 members of Congress wrote to President Trump calling for him to bring the issue of Syria to Congress for debate. The bombing was also illegal under international law as the attack was not authorized by the United Nations and the US was not directly attacked.

While Syria received the most attention in the protests, people also protested US threats against Iran, Yemen, North Korea and Venezuela, as well as conflicts with Russia and China. People also protested the massive increase in US military spending and the escalation of the arms race, including massive spending on nuclear weapons.

People were urged to participate in the Women’s March on the Pentagon on October 20-21 and the protest against the Trump military parade planned for November 11.

Join us here at Powell and Market to protest the illegal #US war in #Syria #USHandsOffSyria #DontBombSyria pic.twitter.com/6IwtcyycFJ

The best response I’ve seen to the bombing of #Syria yet! pic.twitter.com/f3yvphmA9N 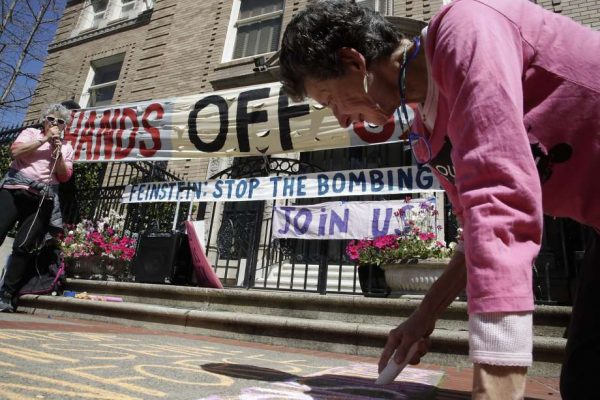 Antwar protest outside the home of Sen. Diane Feinstein. Photo: Paul Kuroda / Special To The Chronicle

Around 50 people gathered at Terry Schrunk Plaza this afternoon to protest the bombing of Syria. We’ll have an update at 5 & 6 on #koin6news #pdx #protests pic.twitter.com/g9cpPYgMsV

Beautiful afternoon in Central Florida. Motorists answered the “Honk for Peace” appeal with a steady serenade. Public sentiment made itself clear. Americans believe #Peace is the answer. With @Jodygoesgreen @JamesMArcher #SpringAction2018 @GreenPartyUS pic.twitter.com/EsLm13q2bg