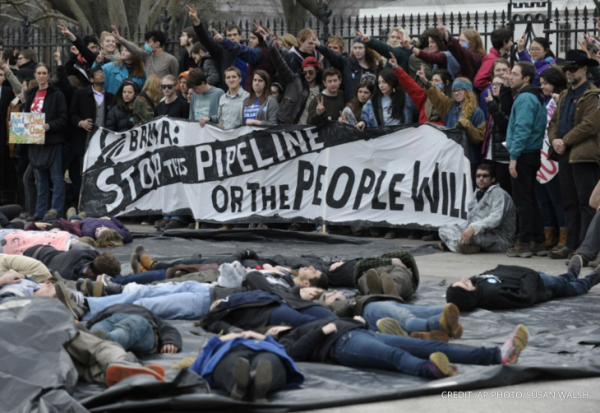 Protests Are Putting A Serious Dent In Tar Sands Expansion

Above Photo: Several hundred students and youth who marched from Georgetown University to the White House to protest the Keystone XL Pipeline wait to be arrested outside the White House in Washington, Sunday, March 2, 2014. CREDIT: AP PHOTO/SUSAN WALSH.

All of those marches, rallies, arrests, and inflatable pipelines are working.

That’s the main finding of a report released this week by pro-clean energy group Oil Change International. According to the report, public opposition has been successful in stopping or delaying tar sands pipeline construction in North America. The existing pipelines carrying oil from Alberta’s tar sands region are 89 percent full, meaning that expansion of tar sands development depends heavily on new pipelines to get that oil to market. Oil Change International’s models found that without new pipelines or expansions on existing routes, tar sands producers will run out of pipeline capacity by 2017.

There are four major proposed pipelines that are key to the expansion of the tar sands: Keystone XL, which runs from Alberta to the Gulf Coast of the United States, and Energy East, Northern Gateway, and the Trans Mountain Expansion, all of which run through Canada. These projects are all facing major opposition, the report notes. Keystone XL has been embroiled in protests, legal suits, and delays for six years, and the Canadian pipelines are all facing protests, both from citizens and from elected officials: the country’s new prime minister Justin Trudeau has said he opposes the Northern Gateway pipeline. In order to expand tar sands production, at least one of these pipelines will need to be approved, the report states.

“The tar sands have run out of room to grow,” Hannah McKinnon of Oil Change International said in a statement. “Production is close to peaking, and now it is time for a recognition that tar sands production has no place in a climate safe world.”

The last major increase in Canada-U.S. tar sands pipeline capacity was the construction of the Alberta Clipper pipeline in 2010. No new major pipelines have been built since then, according to the report, although some existing pipeline systems have been expanded.

Rail isn’t a viable alternative for getting oil to markets. It’s too expensive to be a long term option, something that even some tar sands industry executives have admitted, the report notes.

“The cost of rail is already eating into profit margins to the extent that many producers have given up on railing to the most important refining market for tar sands crude, the U.S. Gulf Coast,” the report states. “Industry consultant IHS Energy estimates that transporting heavy oil from Alberta to the Gulf Coast by rail costs $10.50 per barrel of bitumen more compared with pipelines.”

Rail is also a more dangerous option for transporting oil: a 2013 oil train derailment and explosion in Lac-Mégantic, Quebec, killed 42 people and destroyed the town’s center.

The report comes the same week as Royal Dutch Shell announced that it would be halting the construction of a tar sands project in Alberta due in part to lack of infrastructure to transport the oil to markets. In 2014, Statoil put a multi-billion dollar tar sands project in Alberta on hold, also citing “limited pipeline access” among its reasons. Low oil prices have also resulted in a downturn in expansion: earlier this year, three Canadian energy companies announced they too would shelve plans for tar sands expansion due to low prices.

“This new report is conclusive proof that organizing works,” May Boeve of 350.org said in a statement. “In the four years since we began marching, sitting-in, and risking arrest to keep tar sands in the ground, no new pipelines have been built. It’s victory for our climate, our future, and for all the communities who are the front lines of this fight.”