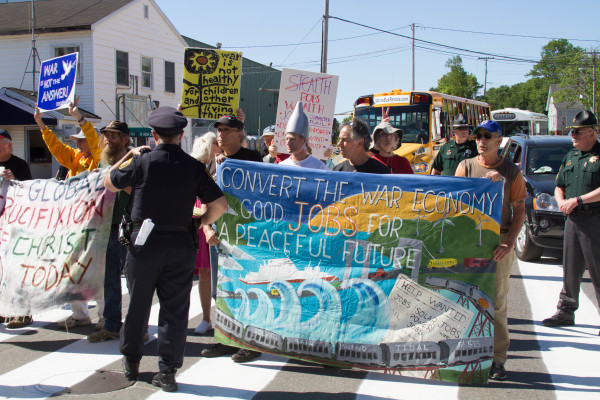 Protests, Arrests Outside Christening Of Destroyer

Above photo: Courtesy of Regis Tremblay. Protesters block Washington Street in Bath on Saturday morning before the christening of the future USS Michael Monsoor at Bath Iron Works.

BATH, Maine — A group of 12 protesters, several of them members of the organization Veterans for Peace, were arrested Saturday morning outside Bath Iron Works as thousands gathered in the shipyard for the christening of the future USS Michael Monsoor.

The protesters blocked traffic on Washington Street, outside the shipyard’s south gate near the intersection of Spring Street, shortly before 9:30 a.m., while people stood in line to enter the event and the future crew of the destroyer marched into the yard, according to protester Bruce Gagnon of Bath.

“We just shut the whole street down,” Gagnon, 63, told the Bangor Daily News. “Our goal was to interrupt the celebration of endless war and corporate profit. On top of that, we’ve been wanting to do it for a long time. There was a feeling that we had to do more to speak out against this in our own community, our own state.”

They were charged with Class E misdemeanor obstructing a public way, fingerprinted and are scheduled to appear in West Bath District Court on Aug. 2, according to a release Saturday from the Bath Police Department.

According to the release, the group blocked pedestrian and vehicular traffic in front of BIW’s South Gate, and remained despite a lawful order to leave and despite being told that if they remained, they would be arrested.

They were then arrested one at a time by Bath police and deputies from the Sagadahoc County Sheriff’s Office. According to the release, they were cooperative throughout the arrest and booking process.

Gagnon said those arrested came from all over the state to protest “because there’s just a growing frustration with the enormous waste of $4 billion for one ship and the provocative nature of these deployments going into the South Pacific.”

The DDG 1001 was named for Petty Officer 2nd Class Michael Monsoor, a Navy SEAL who was posthumously awarded the Medal of Honor after his death in Iraq in 2006.