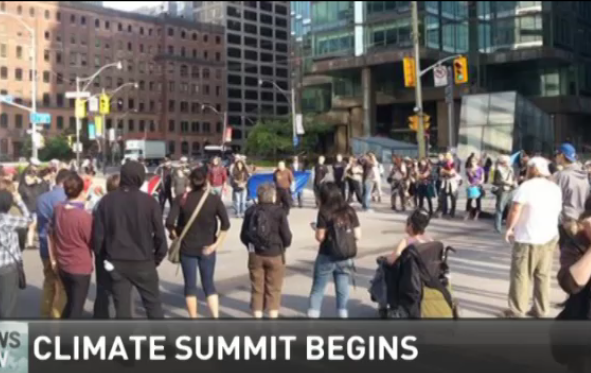 Hundreds of invitation-only delegates are inside the Fairmont Royal York in Toronto for the Climate Summit of the Americas.

And as it began, hundreds of protesters were outside blocking traffic. Early morning protests began around 7. Demonstrators unravelled spools of yarn to block an entire intersection in front of the Royal York.

When the conference began at 9 this morning, the group gathered in front of the hotel entrance and began chanting “shut down the summit”. They say a lot of the people inside are those most responsible for destroying the planet. Some attendees include Shell’s CEO, the head of the Canadian Association of Petroleum Producers and heads of other major corporate cap and trade groups.

Despite the shouting outside, premier Kathleen Wynne kicked off the summit, aimed at fighting global warming. Leaders will discuss the role governments can play in order to reduce greenhouse gas emissions.

When Wynne opened the conference she noted some of Ontario’s recent environmental accomplishments including the closure of all coal-fired plants and introducing a cap-and-trade program to put a price on carbon emissions.

“The oceans will continue to rise. We will experience longer, more intense heat waves & rain storms, erosion, flooding, wild fire. Our ecosystem is compromised, our infrastructure is at risk. That we know. The world that’s our home will become less hospitable. And we should always remember that the effects of climate change transcend our natural environment.”

Leading up to this conference there have been several protests including a march in downtown Toronto with David Suzuki and actress Jane Fonda. Just yesterday the acting environmental commissioner released a report on the province’s progress in reducing greenhouse gas emissions.

She warned Ontarians that we are not on track to reach our targets for 2020 and that initiatives are needed to reduce emissions. The acting commissioner is confident the province will come up with some new ideas after this two day conference.