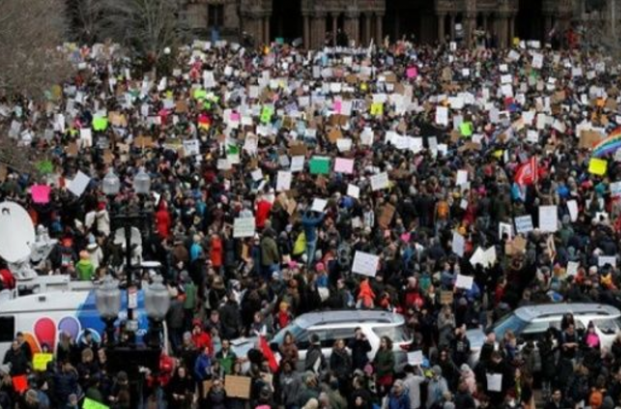 Not letting up on protesting and showing solidarity with those banned, thousands took to the streets again Sunday to protest Trump’s new policy.

Protests erupted for a second day in several U.S. cities Sunday as people took to the streets against President Donald Trump’s executive order banning citizens from seven Muslim-majority countries from entering the United States, even those with valid visas and permanent residency.

Thousands of people gathered in Lower Manhattan in New York protesting Trump’s “Muslim ban” and his earlier decree ordering the construction of a wall along the border with Mexico. “No Ban! No Wall!” the crowd chanted according to the New York Daily News.

Hundreds of people also gathered in front of the White House holding signs that read, “Refugees welcome,” and simply chanting, “Shame,” in reference to the president’s ban targeting those from Muslim-majority nations.

Thousands also took to the streets of Boston to protest Trump and his new policy, which has left several Boston-based academics stranded at airports since Saturday, when protesters later demanded their release.

“Send me back home. Address: Boston,” read one sign held by a protester at the city’s Copley Square. A few Muslim women protested by praying during the demonstration in Boston.

Protests also took place during a Super Bowl event in Houston, Texas, where people held signs in support of refugees and Muslims and against Trump and his controversial policy.

Trump’s so-called “Muslim ban” put a four-month hold on allowing refugees into the United States and temporarily barred travelers from Iraq, Iran, Syria, Somalia, Sudan, Libya and Yemen – countries which have, either militarily or geopolitically, been in U.S. crosshairs for years.

Civil rights and faith groups, activists and politicians were furious and vowed to fight Friday’s order.

Many Democrats came out against the ban and two Republican senators, John McCain and Lindsey Graham, said in a statement that “we fear this executive order will become a self-inflicted wound in the fight against terrorism.”

As news emerged Saturday that airport border control as denying people entry, people took to several airports across the country and demanded the release of those being held by authorities.

Faced with a massive backlash at home and abroad, Trump’s office issued a statement Sunday afternoon claiming this was not a “Muslim ban,” a policy that he promised to implement during his presidential campaign.

“To be clear, this is not a Muslim ban, as the media is falsely reporting. This is not about religion — this is about terror and keeping our country safe,” the White House statement said.

Protests also took place at airports in Dallas, Los Angeles, San Francisco and other cities in the country as the Department of Homeland Security said Sunday it would continue the detentions and deportations and ignore four different rulings by federal judges against Trump’s order.

Hundreds of people were said to have been detained Saturday, but some were released after pressure from activists lawyers and human rights groups. However, reports suggested that some people remained in detention in New York and Washington airports.