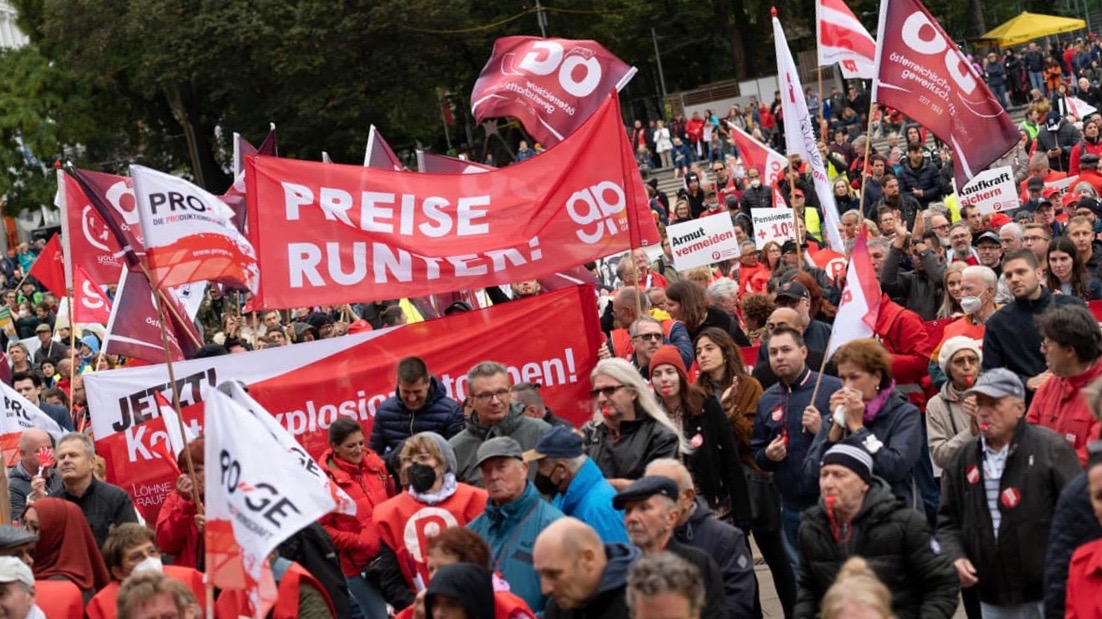 Protests Across Austria Demand Solution To Cost Of Living Crisis

The Austrian Trade Union Federation demanded that the government put a cap on energy bills and house rents and temporarily abolish VAT on food and fuel.

On Saturday, September 17, trade unions and other working class sections hit the streets across Austria protesting the government’s inefficiency in tackling the ongoing cost of living crisis. The protests called by the Austrian Trade Union Federation (OGB) saw the participation of various groups including the Party of Labor of Austria (PdA), Youth Front, Communist Youth of Austria (KJO), Communist Party of Austria (KPO), and Links, among others. Marches were held in cities in all federal States including Vienna, Eisenstadt, Bruck an der Mur, Salzburg, Innsbruck, Bregenz, Lower Austria, and Upper Austria. According to the organizers, over 30,000 people participated in the protests, with 20,000 people having marched in Vienna alone. The protesters called on the politicians to take concrete actions to tackle the current crisis.

People across Europe have been reeling under an acute cost of living crisis marked by soaring inflation in food and fuel prices. Due to the ongoing Russia-Ukraine war and sanctions imposed by the European Union (EU) and the US on Russian gas exports to Europe, energy prices have skyrocketed in European countries. Profiteering by multinational energy producers and suppliers despite this crisis has worsened the situation, including in Austria. According to Statistics Austria, the inflation rate for August 2022 in the country was 9.3% and the minimum consumer basket (cost of household consumption and essential services) is around 16% higher than last year, reported Zeitung der Arbeit (ZdA).

The OGB said, “whether at the supermarket checkout or petrol pump, when looking at the electricity bill or paying rent, prices explode and with them the profits of a few companies and corporations, while many people face enormous problems.”

“For months, OGB and trade unions have been warning of inflation and have presented concrete plans on how quickly help can be provided. But far too little has happened. The OGB therefore calls for rapid measures to relieve the burden. Prices of energy, housing, food, and transport must go down!” OGB added.

In order to tackle the cost of living crisis, OGB has put forth a set of demands, including an energy cap on electricity and gas bills, a special tax on surplus profits of big companies, abolition of VAT on food for a certain period, constitution of an anti-inflation commission, reduction of tax on fuel, removing VAT on public transport, massive expansion of public transport, and legislation for a rent cap.

On September 18, Tibor Zenker from the leadership of the PdA told Peoples Dispatch (PD), “The capitalist crises are leading to massive inflation in Austria. Many people can no longer afford the cost, especially for energy, but also housing and food. Wages are too low and the working class is impoverished, while capital is gaining record profits. The conservative government remains inactive. The Party of Labor of Austria calls for resistance. A general strike is needed. The demands are for wage increases above the inflation rate, state price regulations, and taxation of wealth and corporate profits. The working class is not begging for charity but fighting for its rights.”

The KJO stated, “We can hardly afford to live anymore while the capitalist class increases their profits in times of inflation crisis. The politics of begging for handouts will do nothing. Only a militant movement can counter the capitalist madness.”