Above: Photo by Bob Strong of Reuters.

About 200 demonstrators squared off with police in riot gear overnight, and more protests are planned for Saturday.

About 200 demonstrators squared off with police in riot gear overnight in California’s capital and more protests are planned for Saturday, after an autopsy on Stephon Clark contradicted the police account of the shooting of the unarmed black man.

Waving signs and chanting the 22-year-old’s name in unison, the protesters gathered at city hall before marching into the Old Sacramento part of the city, filled with bars, restaurants and tourists.

Protesters, some with megaphones and black masks covering their faces, shouted “Shoot us down, we shut you down”, along with expletives directed at the police. More than 80 police and California Highway Patrol officers in riot gear blocked protesters from marching onto a highway.

Clark’s death was the most recent in a string of fatal shootings of black men by police that have triggered protests across the United States and fueled a national debate about bias in the American criminal justice system. 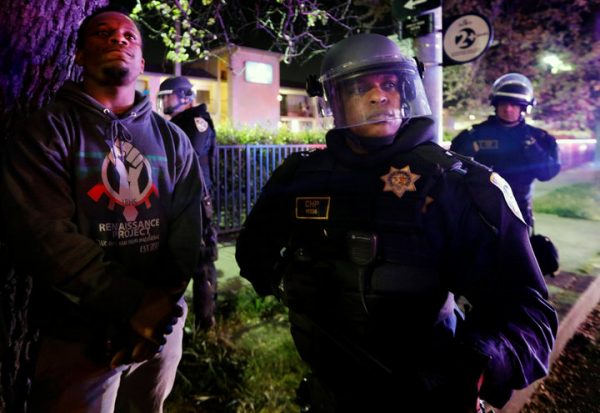 The father of two, was gunned down in the backyard of his grandparents’ house by police responding to a report that someone was breaking windows. Police said the officers who shot at Clark 20 times feared he was holding a firearm, but that he was later found to have been holding a cellphone.

Police have said he was moving toward officers in a menacing way when they fired. The incident was captured on a body cam video released by police on Wednesday.

The latest round of demonstrations were touched off by a new private autopsy on Clark that showed that none of the eight bullets hit him in the front, contradicting the police version of events, a lawyer for the deceased’s family said on Friday. Clark was hit six times in the back, once in the side and once in the leg, the autopsy found.

Benjamin Crump, an attorney for the family of Clark said: “This independent autopsy affirms that Stephon was not a threat to police and was slain in another senseless police killing under increasingly questionable circumstances.”

The Sacramento Police Department said in a statement that it would have no further comment on the case until after the release of the findings of an official autopsy by the county coroner, and a review by state and local prosecutors.

Dr. Bennet Omalu, the forensic pathologist who conducted the independent autopsy, said at a briefing that any one of seven bullets that entered the upper half of Clark’s body could have killed him.

Clark’s shooting has sparked largely peaceful demonstrations in Sacramento. On several occasions over the past two weeks, protesters have marched, held demonstrations and twice blocked fans from reaching games played by the Sacramento Kings NBA basketball team at the Golden 1 Center.

At the funeral service for Clark on Thursday, veteran civil rights leader the Reverend Al Sharpton said: “We’re going to make Donald Trump and the whole world deal with the issue of police misconduct.” 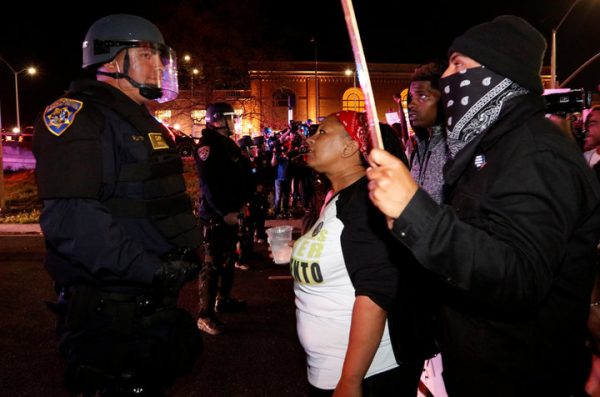 At Stephon Clark protest, police and protesters square off by Bob Clark for Reuters

The service at a church in Sacramento came a day after White House spokeswoman Sarah Sanders said the shooting was a “local matter”.

Another protest is planned for noon on Saturday and is to be led by retired Sacramento Kings’ basketball star Matt Barnes, a statement from the organizers of the Unity and Action rally said.

(Additional reporting by Brendan O’Brien in Milwaukee, Rich McKay in Atlanta and Bob Strong in Sacramento; Editing by Alison Williams)