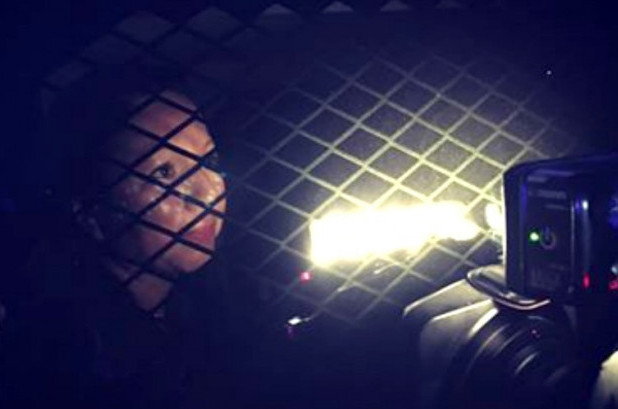 Above Photo: Guadalupe García de Rayos is photographed inside the ICE van that transported her away from her family. (Photo: Puente Human Rights Movement)

Guadalupe García de Rayos, a mother of two and resident of Phoenix for over 20 years, was unceremoniously taken away from her family as Trump’s immigration crackdown begins

Guadalupe García de Rayos, a decades-long resident of Phoenix, Arizona and mother of two, was unceremoniously arrested and hauled away in a deportation van late Wednesday, one of the first deportations of an undocumented immigrant with no violent record to occur under President Donald Trump’s anti-immigrant executive order.

“We’re living in a new era now, an era of war on immigrants.”
—Ray A. Ybarra Maldonado,
Rayos’s lawyerRayos’ sudden arrest provoked outrage from local community members and rights advocates. Protesters, including Rayos’ two children, pleaded with federal agents to let Rayos go and surrounded the van to stop it from leaving, with one person even tying himself to a wheel of the vehicle.

A local reporter posted photos from the emotional standoff on Twitter:

#BREAKING– Crowd of about 40-50 protestors blocking #ICE deportation vans in PHX. #GuadalupeGarcia believed to be inside. family in tears. pic.twitter.com/nD3BoVNfS7

#GuadalupeGarcia looking at her son through the window of an #ICE van. Protestors are blocking the van to halt her deportation pic.twitter.com/MRtO0lqhGZ

Police ultimately removed the protester from the wheel, arrested a total of six people, and the van drove away.

Rayos’ family confirmed that she was deported to Nogales, Mexico, on Thursday.

Watch a video of the protest, which lasted over an hour, here:

Rayos came to the attention of Immigration and Customs Enforcement (ICE) officials in 2008, when she was discovered to be undocumented during a raid ordered by the former anti-immigration sheriff Joe Arpaio of the theme park where she worked. The Los Angeles Times explains:

Guadalupe Garcia de Rayos, 36, had lived in the country since she was 14. She was arrested in 2008 during a workplace raid ordered by then-Maricopa County Sheriff Joe Arpaio at Golfland Sunsplash amusement park in Mesa, Ariz., and convicted of felony identity theft for possessing false papers.

A mother of two, she continued to live in Arizona and checked in with ICE every six months. On her scheduled meeting Wednesday morning, she arrived at the ICE field office in Phoenix surrounded by supporters. An immigration attorney later told the crowd outside that Garcia de Rayos had been arrested.

“We all knew something could be different this time with the new administration,” said Carlos Garcia, director of the advocacy group Puente Arizona, to the LA Times. “She went in with the lawyer and didn’t come out. That was pretty much all there was.”

The New York Times explained the difference between the immigration policies of President Barack Obama—who deported millions of people, more than any president in history—and President Donald Trump, who has pledged to deport five times as many:

The Obama administration made a priority of deporting people who were deemed a threat to public or national safety, had ties to criminal gangs, or had committed serious felony offenses or a series of misdemeanor crimes. Ms. Rayos did not fit any of these criteria, which is why she was allowed to stay in the United States even after a judge issued a deportation order against her in 2013.

That all changed under Mr. Trump. Among the 18 executive orders that he has issued since taking office on Jan. 20 is one stipulating that undocumented immigrants convicted of any criminal offense—and even those who have not been charged but are believed to have committed “acts that constitute a chargeable criminal offense”—have become a priority for deportation.

Kansas Secretary of State and former Trump advisor Kris Kobach is also promising to extend Trump’s executive order to the state level, and introduced a bill empowering state and municipal law enforcement to enforce federal immigration laws and deport undocumented immigrants. “What it does, basically, is set the stage for a scorched-earth approach for immigrants in this country,” said Clarissa Martinez, deputy vice president of National Council of La Raza, to McClatchy.

Meanwhile, Puente Arizona is urging supporters to call ICE headquarters and Arizona senators to demand Rayos’s release and return to her family, as well as circulating a petition on Rayos’ behalf that has already garnered thousands of signatures—demonstrating that human rights advocates are not about to let Trump get away with his xenophobic immigration policies without a fight.

“It’s not fair that my mom might be taken away for providing for my family,” Rayos’ 14-year-old daughter Jacqueline said in a statement Wednesday. “Working should not be a crime… I’m not scared of [Trump,] I’m going to keep fighting to have justice and my mom back.”

Supporters are also rallying and demanding justice for Rayos on Twitter under the hashtag #GuadalupeGarcia: