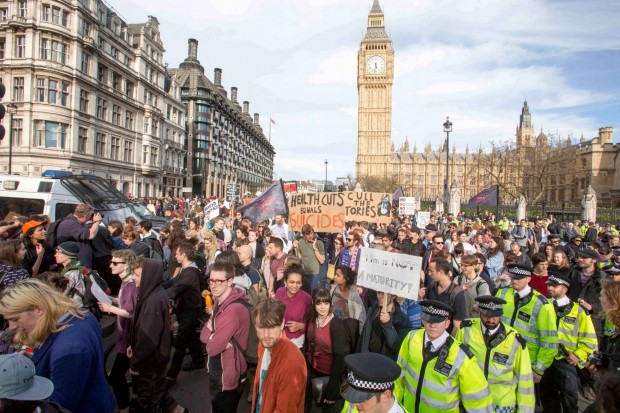 The anti-Conservative protesters, some holding placards reading “I pledge to resist” and “Stop the cuts”, took part in the rally organised just a day into the new Parliament.

It is believed to have started outside Conservative headquarters, where just over 24 hours ago Mr Cameron gave a speech to party activists about their unexpected win.

Much of the protest was peaceful, with many attending calling for the introduction of proportional representation after the election results on Friday.

A number pointed out that the Tories only won 37% of the vote, while minority parties like the Greens and UKIP came away with only one MP despite polling millions of votes between them.

However, protesters were also criticised for calling for the removal of a democratically elected government.

There was also outrage after a World War II memorial to women was vandalised with graffiti saying ‘F*** Tory Scum’.

Police were pictured holding batons as they confronted the crowds and controlled what they called an “unplanned” demonstration.

Protesters threw bottles, cans and smoke bombs at riot police in central London on Saturday in a demonstration against the re-election of Britain’s Conservative Prime Minister David Cameron.

Scuffles broke out when the demonstrators, blaring hooters, banging pots and chanting obscenities, confronted lines of police outside the gate leading to the prime minister’s Downing Street residence. At one point a bicycle was hurled at police.

Eye witnesses estimated a couple of hundred people took part in the protest, including a group of about 25 black-clad youths with sunglasses and face masks.

He said police briefly closed the central Whitehall avenue to traffic but later reopened it and surrounded the last remaining group of several dozen protesters.

In Cardiff, singer Charlotte Church joined a similar rally at the Aneurin Bevan statue in Queen Street, where she was pictured carrying a placard which read: “I’m mad as hell and I’m not going to take it any more”.

A Scotland Yard statement said: “Four police officers and one member of police staff have been injured policing this protest. Two are being treated in hospital.

“Officers are aware of criminal damage to the Women’s War Memorial in Whitehall and are investigating.

“There are no reported injuries to any members of the public.

“Officers are working to minimise disruption to all road users and members of the public passing through the area.”