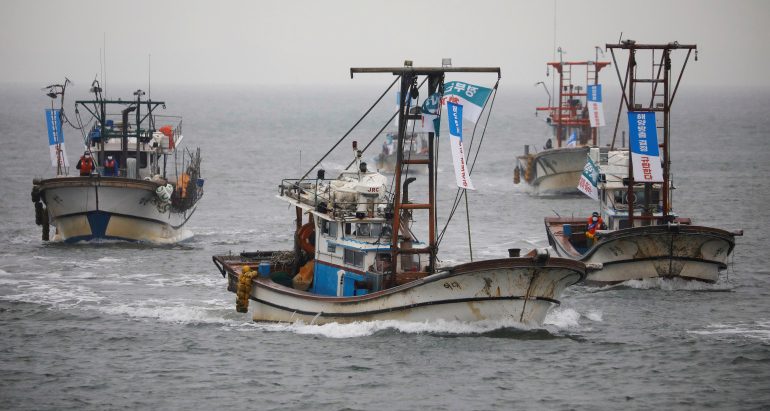 Above photo: South Korean fishing boats take part in a marine protest, part of nationwide protests to demand Japan withdraw its decision to release contaminated water from its crippled Fukushima nuclear plant into the sea, at the sea off Incheon, South Korea, April 30, 2021. The banners read ‘Condemning Japan’s decision to release Fukushima water into the sea’. Reuters/Kim Hong-Ji.

Fishing communities worry water will contaminate the seas despite promises it will be cleaned of radioactive substances.

Seoul, South Korea – Lee Dong-ho, 73, has been fishing waters off South Korea’s southern coast near Japan for 40 years and his eldest son is now taking over the family business, their lifeblood.

Lee farms snapper and yellowtail, mackerel and anchovy, and runs a drying and processing plant.

“We are surrounded on three sides by the sea,” Lee, who lives in Dadae village on Geoje Island, told Al Jazeera.

South Korea has transformed its fishing industry over the past 30 years amid criticism of overfishing. Lee represents positive change as most of his business involves marine-fish farming – as opposed to open-water catching – which now makes up more than half of South Korea domestic seafood production.

But now the $9bn a year industry faces a new challenge.

Last month, Japan announced it planned to release more than a million tonnes of wastewater from the Fukushima disaster into the Pacific Ocean.

“When Fukushima contaminated water is discharged, people will avoid seafood and fishermen will lose their jobs,” said Lee.

Fisheries groups in South Korea have been among the most vocal opponents of the controversial plan with flotillas of vessels taking to the sea to fly flags of protest.

“Our industry is on course to suffer annihilating damage, just with people’s concerns about a possible radioactive contamination of marine products,” a coalition of 25 fisheries organisations said, in a written protest to the Japanese embassy last month.

The Japanese government announced its plan for the water – used to cool the reactors at Fukushima since the power station was ruined in the 2011 tsunami – on April 13 prompting objections from China and South Korea and weeks of protests in Seoul.

Activists have practically camped out in front of the Japanese embassy, with dozens of different groups demanding Tokyo reverse course, invoking environmental Armageddon, delivering petitions and in the case of some students, shaving their heads.

South Korean President Moon Jae-in, in the final year of his five-year term, with approval ratings at their lowest following his party’s recent electoral defeat, came out strongly against Tokyo’s decision, calling for officials to look into legal means to block Japan’s discharge of the wastewater.

But beyond the political machinations that have characterised the reaction in the region, fishing communities in South Korea’s southern regions are among those most concerned about the potential effect of the plan on their livelihoods.

The governors of Jeju Island and Gyeongsang Province and the mayors of Busan and other cities and towns are among those calling for Japan to abandon its plan and for South Korea’s national government to act with greater urgency.

“The ocean is an important resource for not only tourism in the Geoje region but an ecosystem that guarantees the lives of Korean fishermen,” Geoje Island mayor Byun Kwang-yong, told Al Jazeera.

Japan insists the water, which has been treated to remove harmful radioactive substances, is safe and plans to start releasing it in two years’ time.

Estimates suggest it will take at least a year for the wastewater to reach South Korea’s fishing grounds but some say it could take less than 200 days from the date of discharge, the Yonhap news agency reported.

“It will eventually flow into South Korea and the seas around Geoje Island,” Byun said.

Dealing with the wastewater

When the tsunami hit the Fukushima-Daiichi power station three of its six reactors melted down, in the worst nuclear accident since Chernobyl in 1986.

The molten nuclear material must be continually cooled by ocean and rainwater, or else it will overheat and explode, but during the cooling process the water becomes contaminated with harmful radionuclides and becomes radioactive.

Equivalent to about 500 Olympic-sized swimming pools the water is currently stored in tanks around the plant and Tokyo Electric Power Company, TEPCO, the company that runs the power station, says it is running out of space.

It has long argued the best way to deal with the water is to slowly release it into the Pacific Ocean over a 30-year period – the plan announced by the Japanese government. To remove harmful radioactive substances from the water TEPCO has treated it, using the Advanced Liquid Processing System, ALPS.

TEPCO admitted in 2018 the ALPS system had failed to adequately clean the water of dangerous cancer-causing radionuclides, and environmentalists contend the planned discharge, given its scale,  carries huge and unprecedented risks that demand further study.

“How this impacts the food chain, how this impacts human health, this is not at all clear,” Marcos Orellana, the United Nations Special Rapporteur on the implications for human rights of the environmentally sound management and disposal of hazardous substances and wastes and a professor of international environmental law, told Al Jazeera.

Japan has said the discharge process will be monitored by the International Atomic Energy Agency, the IAEA, which has endorsed Tokyo’s plan.

But few see the IAEA as the “neutral technical body” it claims to be.

“The IAEA has a mandate to accelerate and enlarge peaceful atomic energy,” said Orellana, who is sceptical about the speed of the agency’s support for the plan.

“Why would the IAEA, on the same day that Japan announced its decision to discharge the contaminated water … come out publicly in support of Japan?” he asked.

Prior to the development of modern international environmental law, “the seas were regarded as a dumping ground, as a trash can,” Orellana said.

The discharge of the Fukushima wastewater into the Pacific Ocean would violate international law, according to Orellana and other experts.

The London Convention of 1972 and follow-up protocol of 2006, to which Japan is a signatory, seek to “prevent pollution of the marine environment caused by dumping at sea”.

South Korea’s spokesperson said President Moon has suggested that Seoul may take the issue to the International Tribunal for the Law of the Sea but there are political considerations at play.

The United States has come out in support of Tokyo’s plan, as long as oversight is provided by the IAE, and Seoul is wary of offending Washington as it seeks assistance from the Biden administration on peace-building with North Korea and in its battle against COVID-19.

Critics of Japan’s plan argue that they could simply obtain more land nearby to store the water until a process for cleaning to a safe level can be employed.

It is also suggested that alternatives are not being pursued for a simple reason: money.

According to Greenpeace, the most hazardous substances in the water, Strontium and Carbon 14 – with half-lives of 30 and 5,730 years – will remain in the wastewater even after treatment by ALPS.

The environmental group also points to Tritium, which is even more difficult to remove from the water but less understood in terms of its environmental threat, because it binds with ocean vegetation and can then more easily enter the food chain, according to its report: Stemming the tide 2020: The reality of the Fukushima radioactive water crisis.

Report author Shaun Burnie argues the ALPS treatment and ocean discharge were chosen over more viable alternatives because they cost less and give the impression that the problem is being managed.

“Alternatives are expensive, but even more expensive is the cost of contaminating the Pacific Ocean for hundreds of years with radioactive substances,” agreed Orellana.