Above Photo:  Marielle Franco was a voice for the disadvantaged. Photograph: Mídia NINJA

Marielle Franco, known for criticism of police tactics, was killed in apparent assassination

Protests were held across Brazil after a popular Rio city councillor and her driver were shot dead by two men in what appears to have been a targeted assassination.

Marielle Franco, 38, was a groundbreaking politician who had become a voice for disadvantaged people in the teeming favelas that are home to almost one-quarter of Rio de Janeiro’s population, where grinding poverty, police brutality and shootouts with drug gangs are routine.

Richard Nunes, Rio’s head of public security, said there would be a “full investigation” into the deaths, which came despite the military taking charge of policing in the city last month after a surge in violence.

Two police officials told Associated Press that two men in a car fired nine shots into the vehicle carrying Franco and her driver, Anderson Pedro Gomes on Wednesday night. A press officer in the back seat was injured, but survived, the officials said. Both officials said it appeared Franco was targeted. 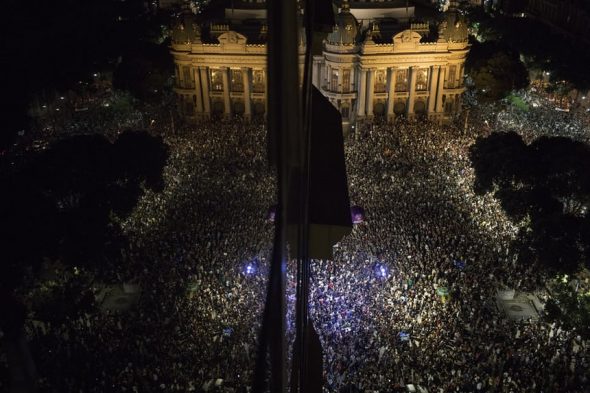 Thousands gather in front the Municipal Theater in downtown Rio de Janeiro, during a protest against the death of Marielle Franco. Photograph: Leo Correa/AP

On Thursday afternoon crowds gathered outside Rio de Janeiro’s council chamber chanting “not one step backwards” ahead of a ceremony in honour of Franco inside. Many wept as her coffin was carried inside.

The spontaneous demonstration brought together union members, feminists, leftists and residents of the city’s poorer communities.

Camila Pontes, 30, a communications officer, sheltered from the hot sun under an umbrella. “I feel lost, without hope,” she said. “It is a very tough blow for anyone who fights for justice, for freedom, for equality.” 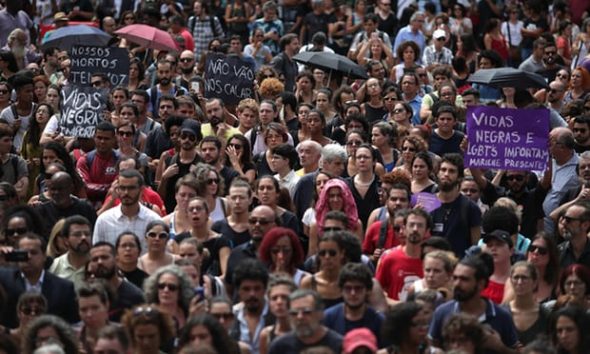 Hundreds of people attend the funeral of Marielle Franco, a popular Rio city councillor, who was shot dead in the city center. Photograph: Antonio Lacerda/EPA

Franco was a gay black woman who defied the odds of Rio politics to win the fifth-highest vote count among council members when she was elected in 2016. She was an expert on police violence and had recently accused officers of being overly aggressive in searching residents of gang-controlled shantytowns. A member of a leftist party, Franco was also known for her social work in favelas. She was in her first term in office.

“She was a symbol of the politics we believe in,” said communications student Jefferson Barbosa, 21, who worked with Franco at the state legislature.

“I have never been so scared,” he said. “People are shocked with what happened. They did this to Mari, one of the most popular lawmakers in Rio. What will stop them doing this to others?”

“The reaction is of indignation, revolt and sadness,” said Matheus de Santos, 20, a truck driver’s assistant from Rio’s Cidade Alta neighborhood. “She was a great representative for the black movement, for the LGBT movement.”

Daiene Mendes, 28, a journalism student and an activist from the Complexo do Alemão favela, said: “More than a friend, Marielle was a symbol of our biggest conquests. A woman like us, black, from the favela, who had a lot of strength to face the institutional challenges of the politics that always kept us distant.”

Marcelo Freixo, a member of the Rio legislative assembly from Franco’s Socialism and Liberty party, said he went to the crime scene in the Estácio area as soon as he heard his friend had been killed.

“The scene is clearly of an execution,” he said. “The shots were all directed at her. They were all from a professional.”

Brazil’s former president Dilma Rousseff described Franco as a “tireless social warrior”. “Sad days for a country where a human rights defender is brutally murdered,” she said in statement.

Redes da Maré, a non-profit group based in the favela where Franco grew up, described the killing as “an irreparable loss”. 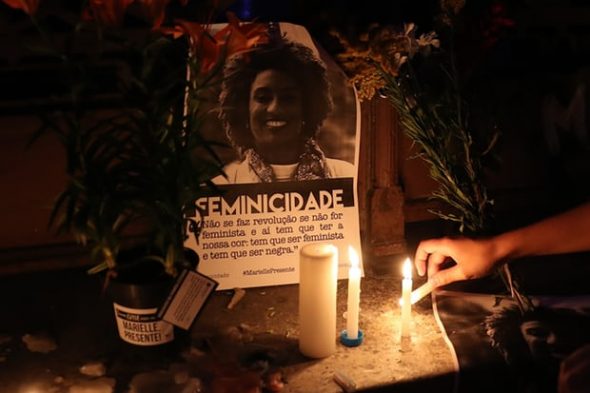 Franco had criticised police killings. In January, 154 people were killed as a result of police action in Rio state, according to state government figures, a 57% increase from January 2017.

In February, President Michel Temer signed a decree putting the military in charge of security in Rio de Janeiro. An army general, Walter Braga Netto, was put in charge of public security and soldiers have carried out operations in gang-run favelas in a controversial attempt to curb rising crime.

One of Franco’s final posts on Twitter called attention to police violence. “Another homicide of a young man that could be credited to the police. Matheus Melo was leaving church when he was killed. How many others will have to die for this war to end?” she wrote. 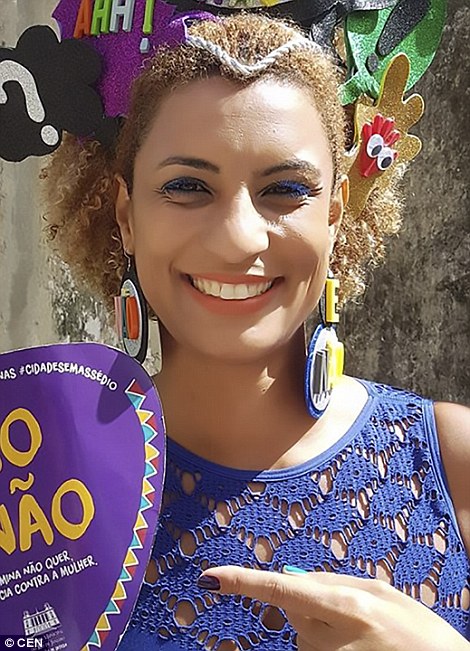 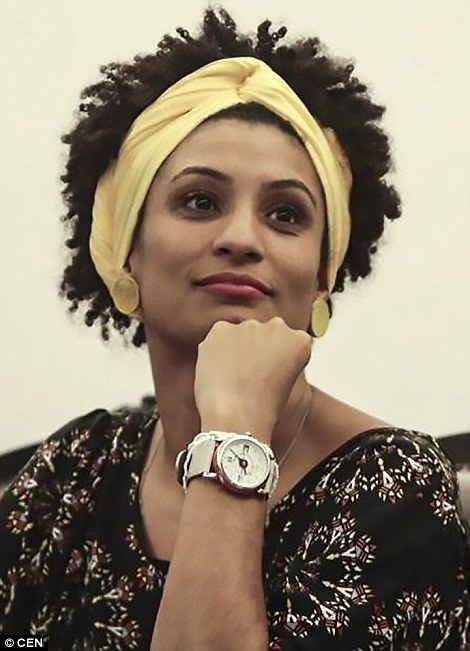 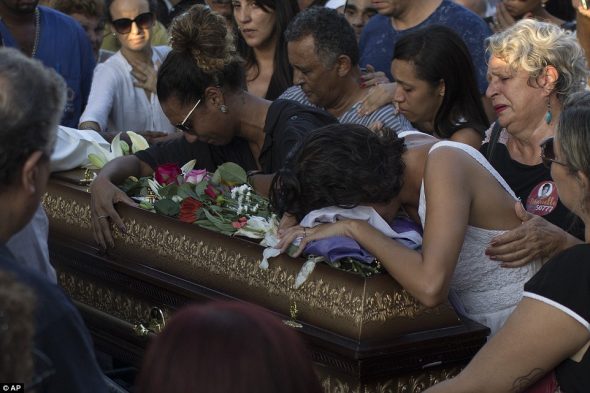 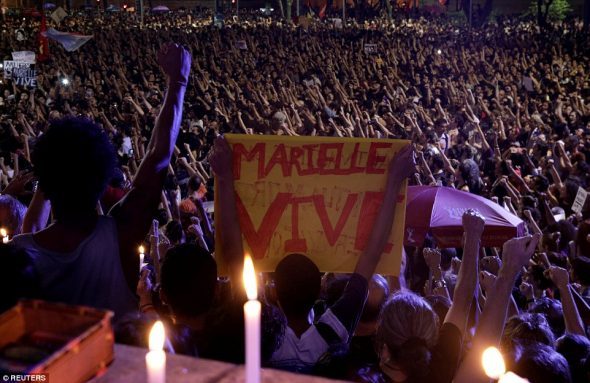 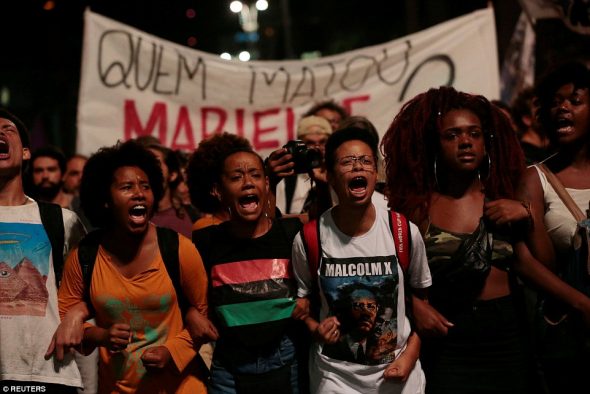 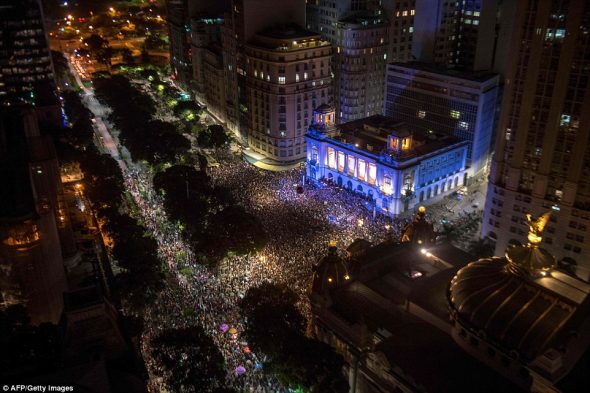 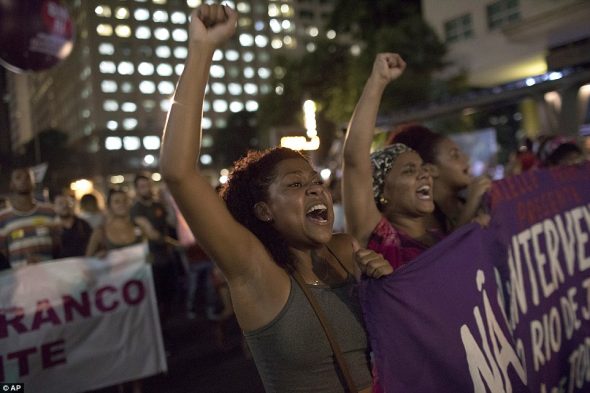