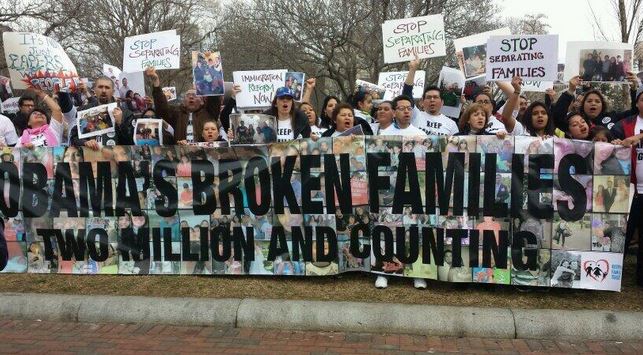 Protests Held In 70 Cities On National Day Of Action

Above: #Not1more Deportation campaign protesters chant “Yes, you can” at the White House.

As part of the national #Not1more Deportation campaign, immigrant communities in more than seventy cities will participate in a national day of action under the banner of “Two Million Too Many” with marches, rallies, vigils, and forums to push the White House to take immediate action to expand deferred action, end its quota programs like S-Comm, and suspend deportations.

The protests are prompted by the record deportations under the Obama administration which are reaching the milestone of two million removals since he took office.

In Los Angeles groups will rally outside City Hall calling for a strict policy rejecting ICE hold requests. In DC they will march to and rally at the White House. In Chicago a two day march will end with participants shutting down ICE at the Broadview Detention Center. In Phoenix, participants will start a 60 mile walk on April 2nd to rally at the Eloy Detention Center on the fifth where many of their loved ones are being held. In Atlanta, GA, they will rally at the state capitol.

Initiated in April of last year with the music video “El Hielo – ICE,” NDLON’s #Not1More campaign has built urgency for administrative relief through grassroots casework of individuals fighting for the right to remain, passing local legislation curtailing deportations, and by organizing direct actions of undocumented participants chaining themselves in front of deportation buses and detention center gates to stop deportations themselves.  In February, NDLON filed a formal rulemaking petition to the Department of Homeland Security under the Administrative Procedure Act requesting a halt to deportations and outlining its authority to do so.

“We want President Obama to be a real reformer, not the deporter-in-chief,” explains Marisa Franco, campaign organizer for the National Day Laborer Organizing Network. “He can give immigrants relief with the stroke of a pen.”

As its demands penetrate the Beltway and prompt the administration to respond, participants are urging immediate action. They say their families can’t wait for relief and that the President doesn’t have to wait for Congress to use his executive authority to stop the suffering. He could expand the deferred action program he created for immigrant youth and suspend deportations immediately. Parallel to the President’s review, undocumented leaders have formed a Blue Ribbon Commission to do an independent investigation of current deportation policies and will present its findings shortly after April 5th.

A partial list of events is below. Promotional video by Cuéntame is available here. More information on activities across the nation can be found at: http://bit.ly/april5n1m and by following #not1more and #2million2many. Email bloewe@ndlon.org for inquiries and details related to any  local events.

4/07 – 9:30am Chicago – Two Day March to Shut Down ICE from Downtown to
Broadview Detention Center

WASHINGTON, DC – Beginning on the April 5th “Two Million Too Many” national day of events against deportations, families and undocumented immigrants will begin an indefinite presence at the White House until President Obama stops deportations and reunites them with their loved ones currently held in detention.

Cynthia Diaz, an 18 year old U.S. Citizen, is fighting to keep her mother from being deported and asking for the Department of Homeland Security to release her from detention in Arizona.

Naira Zapata, partner of Ardany Rosales, and Jose Valdez, father of Jaime Valdez, are fighting to bring home their loved ones, both of whom were deported in retaliation for civil rights organizing and recently presented themselves at the border to appeal their cases.

They say their families can’t wait for relief and that the President doesn’t have to wait for Congress to use his executive authority to stop the suffering. He could expand the deferred action program he created for immigrant youth and suspend deportations immediately.

The families will remain on President Obama’s front lawn until their loved ones are released and until their demands for relief are met. “If the President wants to address deportations, he should speak directly with those of us who are suffering because of his policies,” explains Jose Valdez who has had all three of his sons deported from his home in Arizona.

Cynthia Diaz adds, “It hurts to hear the President say he feels our pain without doing anything to relieve it. We’ve knocked on every door we could for help. We’re at the White House because the President could pick up his pen and bring my mother home today. I’ll be here until I can feel my mom’s arms around me again.”

The group pledges to have a presence in Lafayette Park (2pm closing rally) every day starting Saturday April 5th where a march from Mt. Pleasant (11am starting rally) will conclude as part of a national day of events against deportations. Updates available on twitter at #Not1more.