Protests In Puerto Rico Are About Life And Death

The ongoing protests in Puerto Rico are not just about profane chat messages—they are a response to a broader crisis of violence, degradation and exploitation.

NOTE: Listen to our interview with Puerto Rican lawyer Natasha Bannan, who is active in the protests in San Juan, on Clearing the FOG: Puerto Ricans’ Revolt is Deeper than the Governor’s Chats.

Police donning anti-riot gear—many with their names and badge numbers covered—used teargas, pepper spray, rubber bullets, and batons to dislodge protesters from the streets surrounding the Puerto Rican governor’s mansion in Old San Juan on Wednesday evening. Earlier that day, tens of thousands assembled at the Capitol building before marching to the governor’s mansion to demand the resignation of Governor Ricardo Rosselló. This marked the fifth day of protests and a significant escalation in police violence against civilians. A series of leaked chat conversations involving the governor and other members of his inner-circle provided an unlikely spark that ignited mounting frustrations with the abuses of local elites and the colonial government.

Last Tuesday, a small trove of messages from a private chat between Rosselló and a number of high-ranking officials sent on the encrypted messenger service Telegram were leaked to the press. The messages showed Rosselló and members of his administration using derogatory language to mock political rivals. Although the 11 pages of the chat initially released were damning on their own, Puerto Ricans were shocked by what they read when the Center for Investigative Journalism released a total of 889 pages to the public on Saturday.

The full leaked chat—although there are rumors that more leaked chats involving additional members of the Rosselló team could be on the way—demonstrated the utter contempt and disregard that the political ruling class has for the people of Puerto Rico. The chat paints Rosselló and his inner circle as little more than a pack of overgrown frat boys. The men in the chat engage in all manner of homophobic, transphobic, and misogynist “locker room talk,” calling political opponents putas (whores) and mamabichos (cocksuckers), commenting on women’s bodies, and insulting feminists and members of the LGBTQ+ community. While this alone is certainly worthy of condemnation, protesters are not taking to the streets because of the profanity in the chats. Rather, protesters are situating the chats within a broader context of structural violence, degradation, and exploitation that mark contemporary Puerto Rican society.

The combined catastrophes of the island’s debt crisis and Hurricane María have forced Puerto Ricans to endure an onslaught of both symbolic and material violence that must be negotiated on a near daily basis. From a surge in police killings and repression to rampant government corruption to the regular insults emanating from the colonial government, Puerto Ricans are confronted with constant attacks on their communities, bodies, mental health, and very humanity. The leaked chats painfully show how the current political formation in Puerto Rico, and the economic and political elites who sustain it, devalue life and facilitate the premature deaths of Puerto Ricans—particularly those who occupy the most vulnerable positions in society. The rhetoric and attitudes of the governor and his closest allies captured in the chat are ones that promote harm and death in myriad ways, from the outright incitement of violence to the promotion of a neoliberal politics of deadly neglect. This is something that protesters have been clear about since the beginning of the protests, although the mainstream media, and particularly U.S. based outlets, have narrowly framed the story around the governor and his associates’ inappropriate language and conduct. To suggest that thousands upon thousands from across the political spectrum are pouring into the streets with an intensity that has not been seen in years over foul language minimizes the ways that, for Puerto Ricans, these protests are quite literally about life and death. 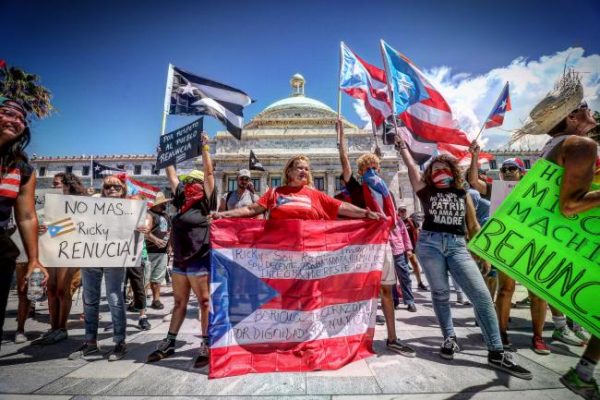 It’s not just that Rosselló and others in the chat referred to women as putas and gatitas (kittens)—it’s that they did so in a context where feminist organizers have been calling on the governor to declare a state of emergency to deal with high rates of gender-based violence for over a year. The governor, when asked about the misogynistic, homophobic, and transphobic language used throughout the chat, said that he was overworked and blowing off steam. But as feminists in Puerto Rico are quick to note, dozens of women have been killed at the hands of stressed out men who were just blowing off steam. The governor’s words aren’t just profane— as he has repeatedly refused to address the high rates of violence that women and queer people confront in Puerto Rico, they translate into lives lost. As Vanessa Contreras Capó, a spokesperson for the Colectiva Feminista en Construcción put it, “His attack was not that he called us ‘whores,’ ‘kittens,’ or any other macho epithet; the governor’s attack is that he still has not declared a state of emergency against gender violence.”

In one of the most disgusting exchanges in the chat, the “brothers,” as the participants refer to themselves, made light of the unprocessed bodies that accumulated in the Office of the Medical Examiner following Hurricane María. In response to comments made by Rosselló’s chief of staff Ricardo Llerandi, Rosselló notes in the chat that they have to work to bury the story—“Hay que matar esa historia rápido” (We have to kill that story quickly). Former chief financial officer and the governor’s representative to the Financial Oversight Board, Christian Sobrino, then replies, “Now that we’re on that subject, do we not have a corpse to feed our crows? They clearly need attention.”

As numerous studies have shown, thousands lost their lives as a result of government ineptitude following Hurricane María. Yet the dead emerge in the chat as little more than a problem of optics. The punchline of this macabre joke drives home what many Puerto Ricans already knew—that their lives mattered little to the local government or Washington, and that their deaths mattered only insofar as they represent a problem to be managed. The past couple of days have seen protesters outside of the governor’s mansion holding signs with the names of loved ones who died as a result of the crisis provoked by Hurricane María. These protestors connected the chat’s disrespect of the dead to the larger structural violence of the Rosselló administration’s mishandling of the recovery, as well as its efforts to cover up the true scale of the disaster. For Puerto Ricans, this wasn’t just a crude or distasteful joke—it was proof of the callousness and disdain for the public with which elites govern.

For Puerto Ricans, the leaked chat was only the latest reminder of the ways that their lives are devalued and their futures circumscribed by both colonial rule and the avarice of local elites. Protesters are speaking out against the content of the chats, but they also are voicing a set of much broader demands to fundamentally reshape Puerto Rican society. People are demanding a life-affirming and more just society as they fill the streets of Old San Juan. They are demanding an end to the austerity measures that have already caused great suffering and threaten the ability of future generations to remain in Puerto Rico and live a dignified life. They’re demanding an audit of the island’s $124 billion debt and the dissolution of the Financial Oversight Board, which critics slam for deepening Puerto Rico’s colonial relationship with the United States. They’re demanding that government officials be held responsible for acts of corruption and profiteering that further deplete public funds and strip nurturing institutions of necessary resources. They’re demanding a future where lives are valued and deaths are mourned. 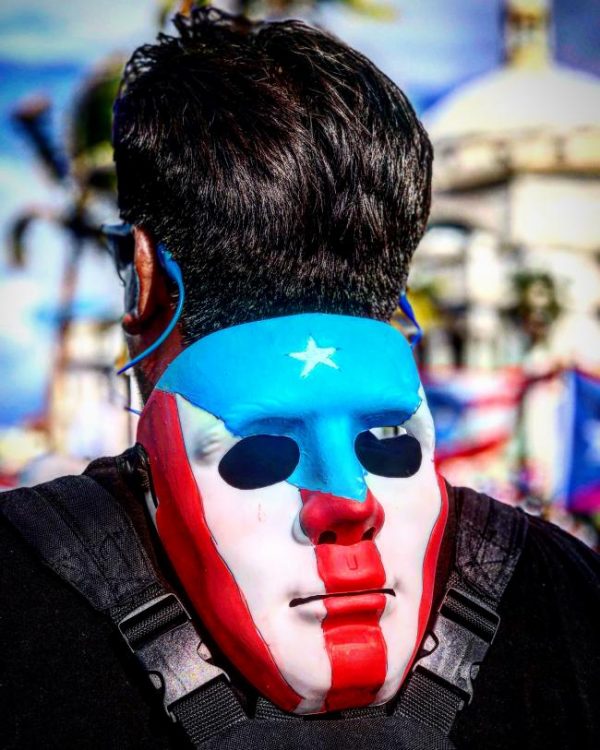 What the chat makes clear is that the current political arrangement cannot provide that future for Puerto Ricans. That’s why people are taking to the streets—not only to demand Rosselló’s resignation, but also to clearly express that the current political situation is unacceptable. Wednesday’s protest was one of the largest in recent history and some are even likening the protests of the past few days to the mobilizations to eject the U.S. Navy from the island municipality of Vieques. Indeed, the protests have brought together an important cross-section of Puerto Rican society speaking to widespread discontent with the current political situation.

Tellingly, one of the most galvanizing figures of the protests has been El Rey Charlie, who mobilized motorcycle and four track enthusiasts to join the protests and wage audio warfare against the governor by revving their engines outside of the governor’s mansion at night. El Rey Charlie has successfully brought working class Puerto Ricans who are often ignored by both political elites and activists into the heart of these protests. On Wednesday night, El Rey Charlie and his crew rode through working class neighborhoods and public housing communities encouraging people to join their caravan to the governor’s mansion. Just as a motorized cavalcade of an estimated 3,000-4,000 people were about to ride into Old San Juan, the police declared the protest over, said the constitution no longer applied, and started to forcibly remove people from the area, nearly causing a stampede.

Protesters have committed to remain in the streets until Rosselló resigns despite threats from police commissioner Henry Escalera to defend the “democratic” government of Puerto Rico “to the last drop of blood.” It’s not clear what exactly will come next, as the governor refuses to step down in the face of mounting protests. Still, one thing is certain: For people taking to the streets, Rosselló and the elite boys’ club that he represents have no future in Puerto Rico.

Marisol LeBrón is an Assistant Professor of Mexican American and Latina/o Studies at the University of Texas at Austin. She is the author of Policing Life and Death: Race, Violence, and Resistance in Puerto Rico and co-editor of Aftershocks of Disaster: Puerto Rico Before and After the Storm. She is also one of the co-creators of the Puerto Rico Syllabus, a digital resource for understanding the Puerto Rican debt crisis. You can follow her on twitter @marisollebron.