Washington, DC — Over 200 Net Neutrality supporters braved bitter cold at the Federal Communications Commission (FCC) Wednesday to make sure Commissioners know they won’t stand by quietly if it cedes control of the Internet to a handful of telecoms. The rally came a day before a critical vote on a proposed rollback of regulations governing broadband providers.

On the sidewalk outside FCC headquarters, protesters built a “memorial” to the Internet with a bed of flowers, candles and a wreath and chanted slogans. FCC staff took pictures of the memorial as they passed by and watched from windows above.

Among protesters’ concerns is the possibility that five corporations may end up with the “keys” to the Internet and be able to decide what data flows through the U.S. communications network, who has access to it and how fast it can be downloaded. They condemned FCC commissioner Ajit Pai’s attempt to end Title II protections.

“Information is the water of democracy,” said Jason Rogers, a citizen who came out because he was concerned about his ability to access sites that would be forced off the Internet. “I value my information, and I don’t want it to be discriminated against.”

Four students from American University also joined in with the hundreds of people chanting outside the FCC.

“We’ve grown up in a generation where information has been available more than ever before, and if a bill like this is signed, it really limits that information,” said Hunter Rich, a law school student.

“The number of times a day I use the Internet a day for research is insane, and the idea that we wouldn’t have access the way we used to is a concern to us,” said Katie Blair, a Law and Society student. Katie was also concerned about the impact removing Title II rules will have on small businesses since she plans to stay in DC to work after school.

Free Press executive director Craig Aaron applauded the grassroots organizing responsible for raising public awareness about what was at stake. “People are really fired up and angry at the people in the FCC for trying to take away the open Internet,” he said. Aaron believes that the blowback from the FCC move will prove disastrous for those who support ending Net Neutrality. “They’re going to find out the hard way what happens when you take something from the public,” he said.

Aaron predicted that three Trump appointees on the commission would vote against Net Neutrality, and it would wind up in court with even more protests and a growing public involvement in advocating for Net Neutrality.

Later Wednesday evening, more activists showed up with the intent to camp out overnight on the sidewalk outside the FCC. Letters were projected onto the FCC building reading “NetNeutralityNow,” and later campers held a series of LED light boards in front of the FCC spelling out “Save The Net.”

Rep. Stephen Lynch (D-MA) joined the activists in the sub-freezing temperatures, bringing them coffee and hot cocoa. “This is a core freedom of speech issue for every American,” he said. Lynch said that the giving Internet control to a few telecoms would allow them to determine what information the public would get and how loud their voices would be. “This is consistent with Citizens United and everything else where the people with the most money have the most voice,” he said. 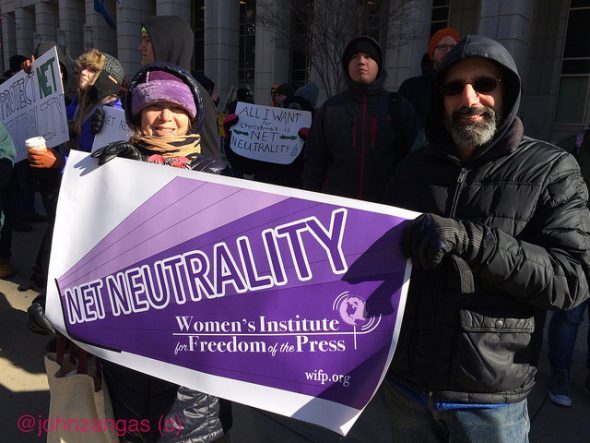 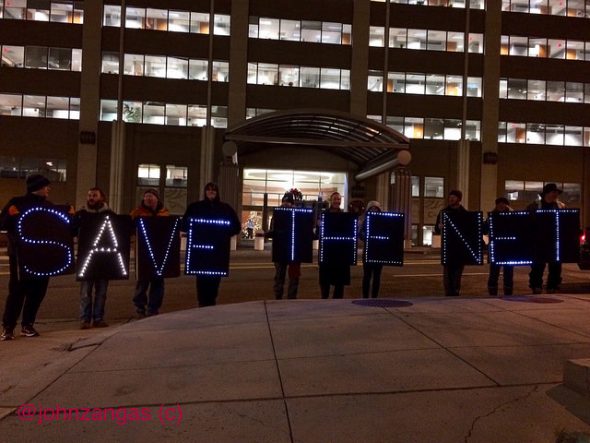 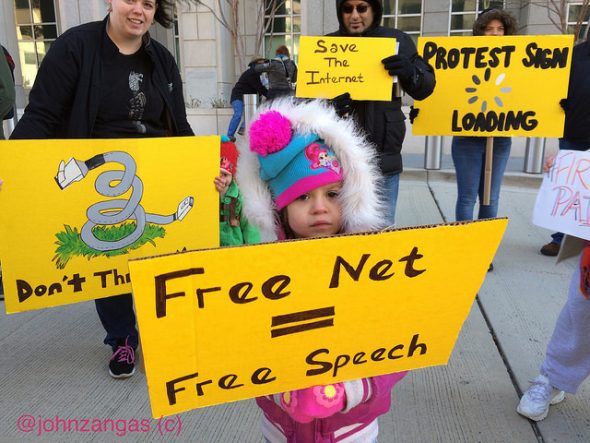