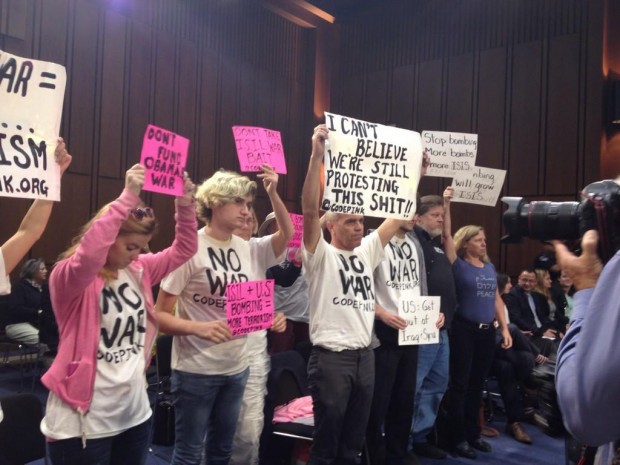 Tell Congress “No” To More War

Above: Members of CODE PINK and Popular Resistance at the Senate Armed Services Committee hearing on September 16, 2014.

TAKE ACTION! Tell Congress “No” to more war. More bombing will grow ISIS, create greater instability in the region and enmesh the US in another quagmire. Call your members of Congress today. Dial 202-224-3121 and ask for your Representative in the House and your Senators. When you reach your members’ offices, give their staff your information and express your opposition to war.

And sign the petition below to send an email to President Obama.

US Defense Secretary Chuck Hagel and chairman of the Joint Chiefs of Staff Army General Martin Dempsey testified before the war-friendly Senate Armed Services Committee on September 16, 2014 about the extent of the US military’s role in fighting Islamic. The hearing was interrupted by peace protesters from CODE PINK and Popular Resistance.

As FOX News reported “The hearing was interrupted several times by anti-war protesters from the groups Code Pink and Popular Resistance, each of whom chanted and held up signs until they were ejected. ‘There is no military solution,” one woman chanted. ‘America does not want war.’” The Associated Press wrote: “Anti-war protesters filled the front rows at the hearing, chanting “no more war” at the start of the session and repeatedly interrupting the testimony. The protesters were escorted from the room.”

Non-Profit Quarterly noted “The hearing of the Senate Armed Services Committee yesterday morning began with repeated disruptions from antiwar protesters.”  They went on to urge more action from the antiwar movement, writing:

“History would suggest that it’s time for the antiwar movement to raise important issues about the U.S. plan to deal with ISIL. Maybe this war against ISIL is different; maybe this is an instance where U.S. military action is necessary to stop ISIL, which has now gathered a large military force and deployed it like a professional army. Maybe ISIL can’t be dealt with the way that the U.S. is addressing Al Qaeda affiliates in Yemen and Somalia. But it is nevertheless the role of the anti-war movement to engage in and elevate the quality of the debate when American civilian and military leaders contemplate military action overseas.”

The propaganda of the corporate mass media has created a temporary blip of support for the War on Isis, but the longer term polls show the US public is opposed to more war, as many commentators have noted the public is “war weary.” We think that is the tip of the iceberg of public opposition to war. The American people are smart enough to see that war has been ineffective and counterproductive as well as very expensive. We’re pleased to see a movement that seeks to end war developing. And, we expect that was the War on ISIS develops and the quicksand of war draws the US into another failed military quagmire, the public will very quickly oppose this war as it has opposed previous wars. Indeed, the beginning of this war may lead to war becoming an issue in the presidential campaign, and front-runner Hillary Clinton once again being on the wrong side of public opinion. MSNBC described the protests:

“Several anti-war protesters were escorted out by police during Tuesday’s Senate hearing. The proceedings were interrupted at least five times, with Sen. Carl Levin of Michigan, chairman of the Senate Armed Services Committee, having to repeatedly gavel the session back to order. At one point, one protester with a Code Pink T-shirt began yelling ‘no more war!’ Levin quipped, ‘you’re acting very war-like yourself.’”

“Before Defense Secretary Chuck Hagel could finish the first sentence of his opening statement before the Senate Armed Services Committee, protesters from anti-war NGO Code Pink infiltrated the room and shouted down the Defense Secretary and committee chairman Carl Levin (D., Mich.).

Protests welcome Secty Hagel to the room, Colonel Ann Wright interrupts Hagel followed by Medea Benjamin and Tighe Barry of CODE PINK There is no question that the protest by CODE PINK and Popular Resistance got national attention and showed people through CSPAN and the reports in the corporate mass media, as well as in independent citizen’s media, that there is opposition to the War on ISIS. Showing opposition is a first step to building a protest movement against a war.

John McCain pushed hard to expand the war from ISIS to Syria, and he showed the ugly side of his personality beyond being a war monger. The Daily Banter described how things took a turn for the creepy when another protester, another young woman took the floor, and Sen. John McCain (R-Ariz.) quipped, “I always enjoy attention from this group,” prompting another senator to shoot back, “I don’t think she’s old enough for you.”

The article went on to criticize some of the tactics of CODE PINK and saying “From what I could make out, though, about three-quarters of what they were saying there made sense. U.S. intervention did lead to ISIS, and we do need smart senators, not smart bombs, and we do need a debate and a vote on this war.  I don’t agree with Code Pink’s absolute opposition to military force, there should always be someone applying pressure from that direction.”

Yes, the facts of war being a failed strategy to dealing with foreign policy conflict are on the side of the peace advocates.  The last 13 years of war should have proven that reality to every American, unless they are on the dole of the military-industrial-congressional complex that is blind to the reality of war not being the answer.