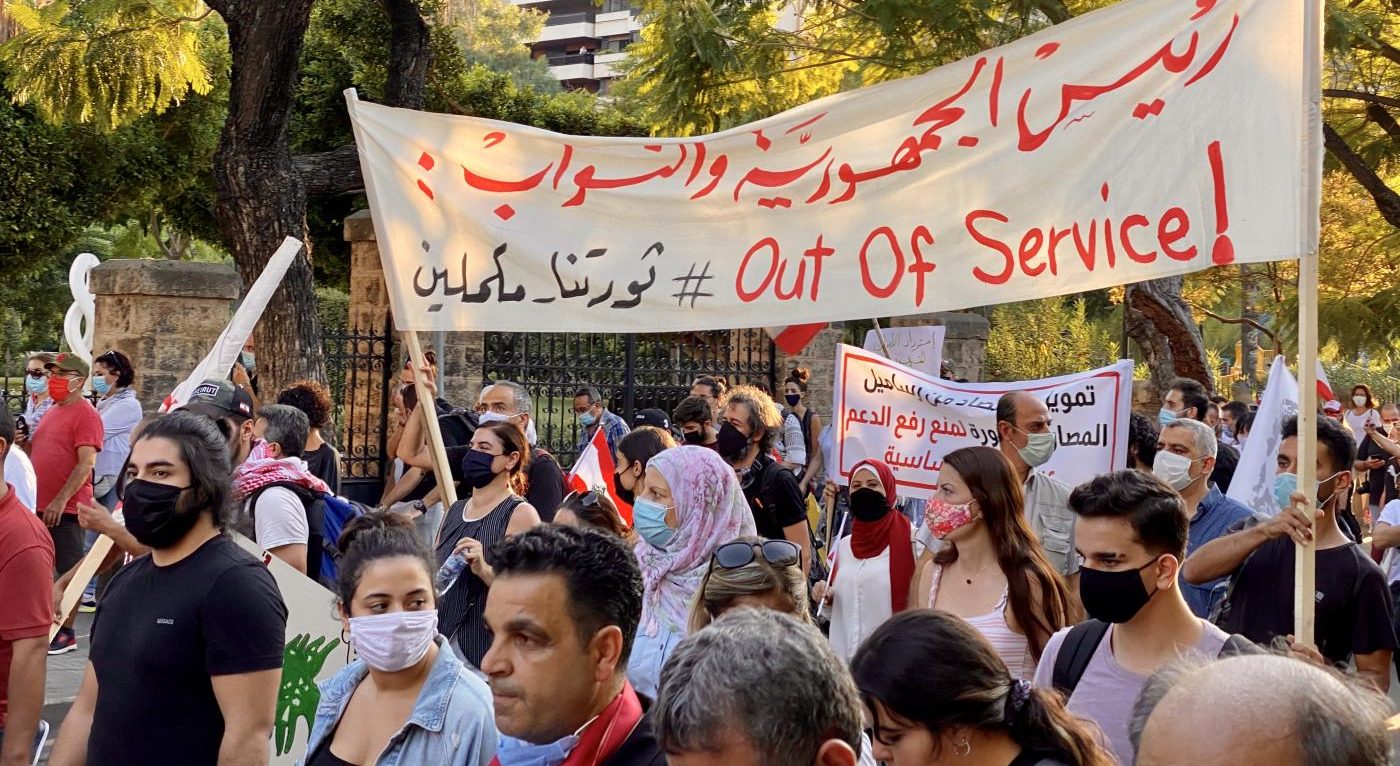 Above photo: Protesters take to the streets of Beirut on 17 October to mark the first anniversary of the Lebanon uprising. Kareem Chehayeb.

Amid the crippling economic crisis and Covid-19 pandemic, and with no functioning government, there is little optimism change in Lebanon will happen anytime soon.

Beirut – Over a thousand protesters on Saturday marched across Beirut to mark one year since Lebanon’s mass uprising against its ruling political parties swept across the country.

Demonstrators chanted slogans against the country’s political officials while holding Lebanese flags and banners. After passing by the Central Bank and the Ministry of the Interior, they continued towards the remains of the Beirut port, destroyed in a devastating blast on 4 August.

The blast, widely blamed on Lebanon’s political class, through a mixture of corruption and incompetence, killed more than 190 people and wounded over 6,500.

As night fell, protesters clashed with riot police in the centre of Beirut, with teargas being used.

“After a year has passed since the start of the popular movement, my hand is still extended for us to work together to achieve demands of reforms,” the statement read. “No reforms are possible outside of [state] institutions and it is not too late.”

The British ambassador to Lebanon, Chris Rampling, posted a statement in Arabic on Twitter, promising to “stand with the Lebanese people”.

“There is reason for hope. There is now an open debate about the scale of the necessary changes and the issues that have always been taboo,” Rampling’s statement read. “There are good people in parts of the administration, and they need support.”

Meanwhile, United Nations Special Coordinator for Lebanon Jan Kubis reiterated in a statement his calls for a reformist government and for the country’s rulers to implement economic and structural reforms.

“The reforms that Lebanon needs are well-known,” the statement read. “The ruling political elites have repeatedly committed to implement them, without delivering on their pledges, thus perpetuating the status quo and paralysis.”

Statement of United Nations Special Coordinator @UNJanKubis on the occasion of the 1st anniversary of the start of popular protests in #Lebanon https://t.co/l3eiXv6JRv

Lebanese Forces leader Samir Geagea shared a picture on his Twitter account in support of the uprising. Neither Geagea’s nor Aoun’s remarks were well-received by the protesters.

Lebanon continues to struggle amid a crippling economic crisis and a lack of a government.

Tala Ladki, 25, who frequently takes part in protests, looks back at the past year with mixed feelings.

“A lot has happened in this past year, and I can’t deny the negative effect all that has happened has had… but I know it’s a struggle,” Ladki told MEE. “[I’m] still hopeful, but just a bit more tired than last year.”

‘Protests a means towards an end’

Protests were held in other parts of Lebanon, too, including in the southern cities of Saida and Nabatieh.

Rania Masri, of the independent political party Citizens in a State, believed that moving towards a viable political alternative from the status quo was vital.

“The protests are a means towards an end and not a goal in and of themselves,” Masri told MEE. “What is vital for their success is the presence of a vibrant political project – or for clarity of different proposals.”

Ladki praised the work some independent groups have done in building a political alternative to “the corrupt oligarchs,” but wanted to see more of this done across the board.

“I have faith we will [achieve this] soon,” she said. “These things take time.”

Less than two weeks after the uprising had ignited on 17 October 2019, then-Prime Minister Saad Hariri resigned in what was seen at the time as a resounding victory for the protests.

However, momentum waned as Lebanon’s economy continued to spiral, with the country’s political and financial problems compounded by the global Covid-19 pandemic. The devastating Beirut port explosion in August was another huge blow to the economic wellbeing and morale of the country.

Over half the country’s population currently lives in poverty, and the international community, spearheaded by French President Emmanuel Macron, has been urging Lebanon’s ruling parties to form a new government.

Many ordinary Lebanese people are now simply focusing on trying to make ends meet or else find a way to leave the country. The local currency has devalued by roughly 80 percent in less than a year, and has driven around 55 percent of the population into poverty

Political analyst Bachar el-Halabi said the uprising had been able to make some breakthroughs, despite the major setbacks it had faced over the past year.

“Today, on one side you have the traditional sectarian parties that see politics through the prism of sectarian power-sharing [up against] a small nucleus that talk about policies of the future and building institutions,” he told MEE. “It sowed the seeds of change among the youth and gave them hope.”

“I excuse myself from continuing the task of forming the government,” Adib had said in a televised speech, apologising to the Lebanese people for his “inability to realise its aspirations for a reformist team” to save the country.

Adib had been appointed on 31 August to form a government after Macron had intervened to ensure an agreement on naming him.

Meanwhile, Bachar el-Halabi was not optimistic that any meaningful change in Lebanon would happen anytime soon.

“It’s not about change needing a lot of time, but I think that right now we’re not even on the path for real change,” he said. “The political system is still in place. It’s going to be lengthy and painful; we’ve already seen that.”