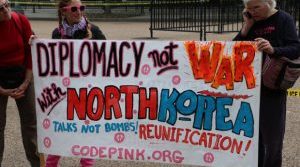 Protests Outside Of Trump-Senate Meeting On North Korea

Police Try To Remove Protesters, Threaten Arrest but They Refuse

People opposed to war with North Korea were at the White House as Senators arrived to meet with the Trump administration. All 100 Senators were invited for a briefing from the State Department and Pentagon on North Korea. The only Senator who we are aware of who did not attend was Bernie Sanders who said he did not want to be part of a photo op for Donald Trump.

The protesters called for no war with North Korea and urged dialogue, diplomacy and negotiation; not war and militarism. Protesters urged the United States to enter into a formal end to the Korean War, stop war games threatening North Korea with invasion and nuclear attack, as well as entering into a security agreement with North Korea. In return, people urged North Korea to stop the development of nuclear weapons and intercontinental ballistic missiles.

As the two buses carrying Senators were about to arrive, the Secret Service attempted to remove 25 protesters. More protesters were prevented from getting to the area, and Richard Ochs was tackled by police when he tried to join the protest. Others were held behind barriers from joining.

Protesters refused to move despite threats of forced removal and arrest. As you can see in this video, after debating with the police about their constitutional rights, the protesters broke into song and the police backed off. Protesters were able to stay and made sure Senators saw and heard them as they got off the bus to go into the meeting.

Brian Becker of the ANSWER Coalition reminded people of how, during Obama’s effort to attack Syria, protesters drowned him out when he was speaking in the Rose Garden.

After the Senators were inside, the Secret Service blocked the protest with a bus to prevent elected officials from seeing that there was opposition to war with North Korea, but since they were already inside and had seen and heard the protest, the suppression of Freedom of Speech made little difference. The actions of the Secret Service showed that protest has an impact on elected officials as it was important to the White House that the protest not be seen or heard.

“The United States needs to stop its aggressive militarism against North Korea. War games that include mock nuclear attacks have escalated conflict. The United States should enter into negotiations with North Korea to stop their development of long range missiles and nuclear weapons in return for the US stopping practice attacks on North Korea,” said Kevin Zeese, co-director of Popular Resistance.  “It is time to end a relationship of conflict with North Korea and begin to build a positive relationship.”

​​The protest was organized rapidly in response to the Trump administration holding a UN Security Council luncheon on Monday and the announcement of the entire Senate, without their staff, being invited to the White House for a briefing on North Korea. Participating organizations included Popular Resistance, CODE PINK and the ANSWER Coalition.

“If the Trump administration continues to escalate militarism against North Korea, members of Congress and the Trump administration should expect protests against war to continue and grow. War between the US and North Korea is a losing proposition for both countries and for the region. The risk of war with a nuclear power, which has borders with Russia and China, are too great to risk. President Trump would be showing global leadership if the United States began diplomacy with Pyongyang,” urged Margaret Flowers, MD, co-director of Popular Resistance.

Take Action: This is the beginning of an ongoing anti-war campaign. The Trump administration and bi-partisans in Congress are threatening war in North Korea, Syria, Iraq and Iran as well as raising tensions with Russia and China. Please take action on opposing war in North Korea by letting your Senators know you support diplomacy, not war. Take action here. If the situation with North Korea continues to escalate we will be taking action in Washington, DC and urging people to organize protests throughout the country.