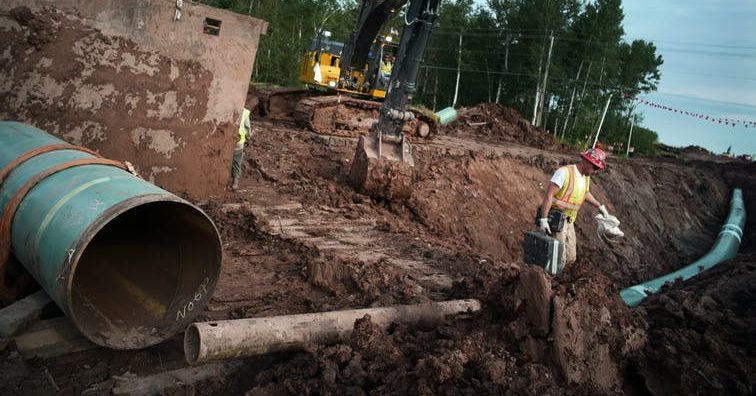 Protests Over Enbridge’s Pipeline Are Expected To Intensify

Protests are planned to resume Monday, and critical court actions are expected over the replacement for the Canadian company’s current Line 3.

It could be a long, hot summer for the $3 billion pipeline Enbridge is building across northern Minnesota.

As workers start the final push to complete the pipeline, a replacement for the company’s deteriorating Line 3 and one of the largest construction projects in the state in recent years, protests are expected to intensify starting Monday.

Meanwhile, a key court decision due this month could halt construction of the new Line 3 if the ruling goes against Enbridge, jeopardizing the Canadian company’s plans to have oil running through the pipeline in the fourth quarter.

“We’re about 60% complete overall,” Enbridge CEO Al Monaco told analysts on a recent earnings call. “So I think it’s late summer, early September when all the pipe will be in the ground.”

Construction on track for fall completion

After six years of contention before Minnesota regulators, Calgary-based Enbridge began building the pipeline across northern Minnesota in early December to ferry thick Canadian crude oil to the company’s terminal in Superior, Wis.

From April 1 through June 1, work on the pipeline itself ceased due to spring road and environmental restrictions, though Enbridge continued building pumping stations.

Over the past week, the full workforce — which numbers over 4,000 — returned as direct pipeline work resumed.

From the start of construction, environmental and Indigenous groups — who see the new Line 3 as an ecological threat — have been protesting and conducting civil disobedience on the pipeline route. Roughly 250 protesters, who call themselves water protectors, have been arrested.

Protests could ramp up

On Monday, organizers expect more than 1,000 people from around the country to show and protest at an undisclosed location along the new pipeline route in the Park Rapids, Minn., vicinity.

Dubbed the Treaty People Gathering, film star and activist Jane Fonda is expected to address the crowd, as well as Bill McKibben, an author, environmentalist and founder of 350.org, a national climate action group.

“They are coming to support the treaties and the rights of our people,” said Winona LaDuke, head of the Indigenous environmental organization Honor the Earth. “This is what you call water protector tourism.”

She was referring to the treaties the Ojibwe have with the U.S. government that protect their rights to hunt, fish and gather on an expanse of northern Minnesota. Honor the Earth and Ojibwe tribes have argued that Line 3 violates treaty rights.

More than 50 Indigenous, environmental and faith groups are sponsoring Monday’s event. Resilient Indigenous Sisters Engaging Coalition, an environmental group, is the primary organizer, LaDuke said. Other main organizers are Honor the Earth; the Giniw Collective, a women-led Indigenous group; and MN350, an affiliate of 350.org.

Monday’s event could be the first of many larger protests. Minnesota’s warm weather has arrived, while Enbridge is closing in on its goal.

Line 3 opponents are hoping to draw the kind of awareness that led thousands of people to set up an encampment to protest the construction of the Dakota Access pipeline in North Dakota in 2016.

“We are exhausting our recourses,” LaDuke said. “This is really a dire situation that the governor and Enbridge has put us in.”

She was referring to the Minnesota Pollution Control Agency (MPCA), an arm of Gov. Tim Walz’s administration, which granted water and wetland permits for Line 3. Pipeline opponents have challenged the MPCA’s decision before the Minnesota Court of Appeals; oral arguments are slated for June 10.

Enbridge says the new pipeline is needed to improve safety and that the current Line 3 is corroding and can operate at only half-capacity. Opponents say the new Line 3, which partially follows a new route, would expose an additional region of lakes, rivers and wild rice waters to oil spills, as well as exacerbate climate change.

The case being heard this month is one of three pending Line 3 appeals.

One that challenges the U.S. Army Corps of Engineers’ water and wetlands permit for the project will play out at least through summer in a federal court in Washington, D.C.

More imminent is a ruling from the Minnesota Court of Appeals — due by June 21 — on challenges to Enbridge’s main Minnesota Public Utilities Commission (PUC) permit, known as a certificate of need.

Pipeline opponents argue that the PUC signed off on a faulty oil demand forecast by Enbridge. The Minnesota Department of Commerce has pressed its own appeal of the PUC’s acceptance of Enbridge’s oil forecast.

“The court could say the [PUC] issuance of the certificate of need is arbitrary and capricious because it relied on an incomplete demand forecast,” said Alexandra Klass, a University of Minnesota law professor specializing in the environment and energy. “The company could be without a certificate of need.”

The appeals court could then order a halt in pipeline construction. Or it could allow construction to continue while Enbridge prepares a new oil forecast. Or it could remand the issue back to the PUC.

The PUC and Enbridge have defended the oil forecast’s integrity. “We think our case is strong and we are confident we will prevail,” said Mike Fernandez, Enbridge’s head of public relations. “But we are planning in case things go otherwise.”

Line 3 opponents have long been calling for President Joe Biden to rescind the Army Corps’ permit for the pipeline, a cry that will continue as protests ramp up.

Environmentalists were encouraged when Biden — on his first day in office — revoked a border crossing permit for the Keystone XL, a multistate pipeline that would have transported oil from Canada. Former President Barack Obama also was against the project, but it was revived in 2017 by former President Donald Trump.

The Biden administration has steered clear of taking a position on the Dakota Access pipeline. If it had, it would be a clearer indication on where his administration would stand with Line 3.

Despite massive protests led by the Standing Rock Sioux Tribe in 2016, Dakota Access began shipping oil from North Dakota in 2017. The tribe has continued to fight the pipeline — which runs under its main water supply — in federal court.

The Standing Rock Sioux won a major victory last year when U.S. District Court Judge James Boasberg ruled that the Army Corps needed to conduct a full environmental impact statement for the Dakota Access — and that in the meantime, its permit was vacated and the pipeline should be closed.

An appellate court agreed with Boasberg’s ruling but halted any imminent closure. The Corps has been allowing Dakota Access to operate while completing the environmental review.

In May, Boasberg ruled that Standing Rock had not proved that the tribe would be irreparably harmed if Dakota Access continued to operate during the review. But he had some cutting words for the Corps.

“The Corps has conspicuously declined to adopt a conclusive position regarding the pipeline’s continued operation, despite repeated prodding from this court and the Court of Appeals to do so,” he wrote. “Its chosen course has instead been — and continues to be — one of inaction.”

Klass, the U professor, said it might have been a tougher decision whether to close Dakota Access because it’s an operational oil pipeline, not a work in progress.

Still, “the Biden administration seems not to be taking a strong stand against Dakota Access,” she said. “I don’t think it would do anything different for Line 3.”