Japan’s citizens are enraged by the nationalism gripping the former imperialist power. Inflammatory public displays by right-wing lawmakers along with a precipitous increase in the purchase of US weaponry have sparked massive protests.

The protests drew up to 60,000 participants in Tokyo alone, where Japanese people of all ages rallied in Rinkai Disaster Prevention Park calling for the scandal-plagued Abe administration to step down and for the preservation of the Constitution’s Article 9. Rallies were also held in Osaka, Fukuoka, Hokkaido, and other cities across the country.

Article 9 of the Constitution explicitly renounces “war as a sovereign right of the nation and the threat or use of force as means of settling international disputes.”

It also clearly states that “land, sea, and air forces, as well as other war potential, will never be maintained” – a promise that is contradicted by the high-tech arsenal of Japan’s Self-Defense Forces (SDF), which now includes massive helicopter destroyers that are capable of being transformed into world-class aircraft carriers. While unconstitutional, the SDF is one of the strongest militaries in the world.

Abe’s ruling right-wing Liberal Democratic Party (LDP) has sought to junk the pacifist constitution since the party’s founding in 1950. The LDP now claims that the move would merely to legalize the military’s ambiguous status and prepare Japan for potential threats from North Korea and China.

Domestic critics fear that the revision would lead to a major remilitarization of the country and its potential entanglement in foreign military adventures.

We were able to enjoy peace after the end of World War II thanks to Article 9 … We should pass it down, as it is, to our grandchildren’s generation, rather than moving toward preparations for war by specifying the legal status of the Self-Defense Forces in the Constitution.”

According to an Asahi Shimbun survey, only 39 percent of Japanese voters support Abe’s proposal to revise the Constitution, while 53 percent oppose the move. However, a separate survey by Kyodo News agency found that while sixty-two percent of respondents oppose the revision by Abe’s 2020 target date, 58 percent feel that a constitutional revision is “necessary” or “somewhat necessary” due to the “outdatedness” of certain clauses.

The ultra-nationalist pressure to rearm

Much smaller pro-amendment rallies were also held in the capital calling on the government to explicitly define the status of the SDF while broadening its mandate to take part in military actions abroad.

In a video message to the Kokai Kenpo Forum, Abe celebrated his Constitutional reform advocacy as other speakers noted its necessity for defining the “honorable status of the SDF in the Constitution and [raising] the morale of SDF members.”

The forum is associated with Nippon Kaigi (Japan Conference), an ultra-nationalist lobby group that has a parliamentary league for which Abe serves as special advisor. The group, which includes prominent businessmen, academics, and bureaucrats, has a record of extolling the virtues of Imperial-era Japan and seeks to do away with the entire “occupiers’ Constitution” of 1947.

A U.S. congressional report in 2014 noted that Nippon Kaigi believes that “Japan should be applauded for liberating much of East Asia from Western colonial powers, that the 1946-1948 Tokyo War Crimes tribunals were illegitimate, and that the killings by Imperial Japanese troops during the 1937 ‘Nanjing massacre’ were exaggerated or fabricated.”

Support for constitutional revision has also been fanned by U.S. President Donald Trump, who has placed pressure on the Abe government to purchase more U.S. weapons. Trump’s pressure coincides with a push by LDP lawmakers to increase an already record-high defense budget that amounts to 5.19 trillion yen, or $45.77 billion. Washington also hopes to enhance the U.S. military presence in the Asia-Pacific region, a strategy that would be assisted by a remilitarized Japan.

The past as prologue?

East Asia suffered grievous losses at the hands of the Japanese Imperial Army, which committed horrific crimes across the region in the first half of the 20th century.

Last week, 150 members of the National Diet paid their respects at the shrine while Prime Minister Abe sent a ritual offering. 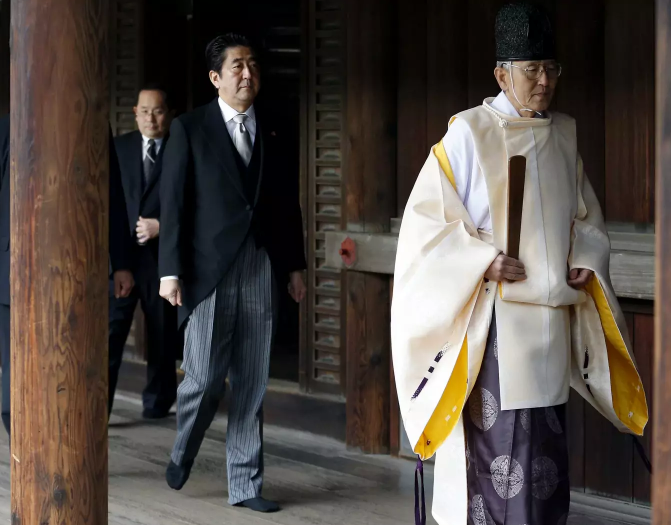 The North Korean government lambasted the visits in a statement by the Korean Committee on Measures for the Sexual Slavery for Japanese Army and Drafting Victims, describing the move as “a total denial of the blood-stained past and an act that can never be justified with any pretext or excuse.”

The statement also noted that right-wing politicians seek to “reverse the crime-woven past, instill the frantic view on Japanese subjects and militarism into all the Japanese nationals, including the new generation and thus hurl them into the path of aggression against humanity.”

This lack of trust in Japanese leaders and ongoing debates over the country’s grisly record has likely led to Tokyo being frozen out of talks between Pyongyang, Seoul, Washington and Beijing.

Japan and the region express worry

China views Abe’s attempts to alter the status quo as reflective of an overall mood in Tokyo that sees China’s rise as a zero-sum game that adversely impacts Japan’s economic development and regional hegemony.

However, some of the strongest concern emanates from within Japan. Still painfully aware of the trauma the nation experienced following the fire-bombing of Tokyo, atomic bombings of Hiroshima and Nagasaki, the war-dead resulting from past militarist adventures, and the humiliation of U.S. occupation, Japanese citizens have a palpable suspicion of Abe’s intentions.

The biggest cause for concern in the push for constitutional amendment is Abe’s political ideology. It cannot be assumed that post-war Japan is an entirely different country with a new generation of leaders when the Prime Minister is a right-wing revisionist … Abe’s intention to amend the constitution is a serious cause for concern, not only for Japanese citizens but also for the region, and it is not something that should be in the least bit embraced.