WEYMOUTH, Massachusetts — After endless public hearings, drawn-out government appeals and fruitless legal proceedings, a band of community and climate activists was left to this: Sitting in the path of a concrete truck at the site where a large natural gas compressor is being built outside Boston.

They were five years on in their bid to block a facility that would play a crucial role in completing a pipeline project that seeks to ship hydraulically fractured gas from New Jersey to Canada. The site in Weymouth is near two low-income communities with sizable minority populations already facing high levels of pollution from other fossil fuel infrastructure.

“The Fore River Basin is already toxically overburdened with close to 10 different polluting facilities within a one mile radius,” said Alice Arena, president and executive director of Fore River Residents Against the Compressor Station and a Weymouth resident. “It is highly populated, it is [an] environmental justice [community] and it is unconscionable to be adding another polluting facility.”

According to one estimate by an environmental science professor who was involved in the protest, the compressor and pipeline could enable carbon emissions equivalent to more than one million vehicles per year.

By the time police cleared the site Wednesday morning, nine members of Extinction Rebellion Boston and 350 Mass Action had been arrested for trespassing and disturbing the peace.

The protest occurred just one week after a federal appeals court invalidated a permit for a similar compressor station slated for the historic African American community of Union Hill, Virginia. The court determined that officials in Virginia failed to adequately consider the health and environmental justice concerns of the surrounding residents.

Unlike in Virginia, however, the compressor station in Massachusetts, owned by Calgary-based Enbridge, Inc., is already under construction. “We are committed to proceeding with construction activities and operating the Weymouth Compressor Station with public health and safety as our priority, and in accordance with all applicable regulations and requirements,” Enbridge said in a statement.

“I call it a carbon bomb,” said Nathan Phillips, an environmental science professor at Boston University, who participated in Wednesday’s protest.

Compressor stations are used to boost the pressure of natural gas as it moves through pipelines. The stations are relatively common, with more than 1,300 similar facilities sited at regular intervals along natural gas pipelines nationwide.

In addition to increasing pressure, the stations are designed to act as pressure release valves, venting natural gas into the air if pressure within a pipeline gets too high or if the pipeline requires maintenance. The primary component of natural gas is methane, a potent greenhouse gas that is more than 30 times more powerful than carbon dioxide at trapping heat in the atmosphere.

Enbridge said compressor stations are “designed with continuous monitoring devices along with emergency shutdown systems capable of isolating the station and safely venting the gas very quickly in the unlikely event of an emergency. Since natural gas is lighter than air, natural gas rises and dissipates quickly into the atmosphere.” 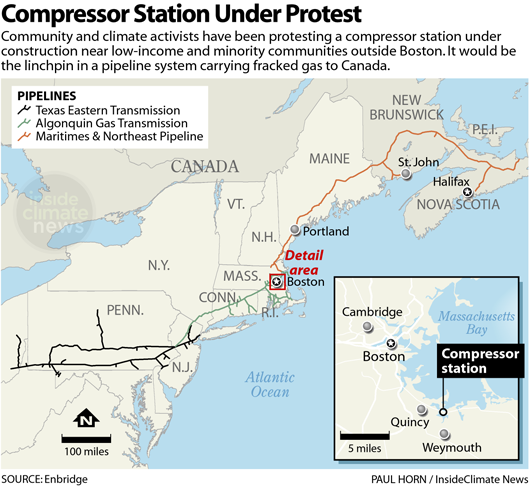 Phillips, who led a pioneering 2013 study on methane emissions from gas infrastructure, calculates that annual greenhouse gas emissions from venting at the Weymouth compressor station alone will be equal to the yearly carbon dioxide emissions of 14,000 automobiles. This amount is dwarfed by the additional emissions associated with gas flowing through the pipeline, emissions that occur when the gas is eventually burned by end users or from leaks elsewhere in the pipeline system.

“If you add up the through-put of the gas, along with the operating emissions [of the Weymouth compressor], it adds up to over a million motor vehicles per year, every year that it would operate,” Phillips said.

The Massachusetts Department of Environmental Protection’s  air quality plan for the compressor station notes that state climate policy requires agencies to “consider reasonably foreseeable climate change impacts, including additional greenhouse gas emissions,” when issuing permits. The approval plan says carbon dioxide emissions from the high-efficiency gas turbine used to power the compressor will be low, and a required leak detection and repair program will minimize unintended methane leaks from the facility’s pipes. The plan does not, however, calculate greenhouse gas emissions from intentional venting at the facility or the emissions associated with the additional gas flowing through the high-pressure pipelines that the compressor station would enable.

Another concern of the activists involves other toxic chemicals released during venting.

“This compressor station is going to emit benzene and formaldehyde on a daily basis in the course of their operations,” Philip Landrigan, director of the global public health program at Boston College, said in a video last April. “Both of those chemicals cause cancer, both of those cause leukemia and benzene causes lymphoma.”

Modeling conducted as part of the state Department of Environmental Protection’s air quality plan, released in August, showed emissions from the compressor station would include elevated levels of benzene and formaldehyde, but those levels would be within the state’s allowable limits guideline (43 percent of the annual limit for benzene and 70 percent of the annual limit for formaldehyde.) The report notes that the modeling does not take into account preexisting background levels or emissions from unrelated sources.

What makes the Weymouth compressor unusual, and one reason climate activists strongly oppose it, is the key role it would play in linking two existing natural gas pipelines, enabling large volumes of hydraulically fractured gas from the Marcellus shale basin of Pennsylvania to be exported to Canada in a project known as the Atlantic Bridge.

The Weymouth compressor would give Enbridge the final pressure boost it needs to reverse the flow of the later pipeline and allow for the shipment of more than 100 million cubic feet per day of fracked gas from the Marcellus shale basin to New Hampshire, Maine and Canada. Its outsized significance as the final piece of the Atlantic Bridge project has been likened to “the last spike needed to connect the two ends of the transcontinental railroad.”

A report released last February by the Greater Boston chapter of Physicians for Social Responsibility took issue with the siting of the proposed Weymouth compressor station, which would be located on an enclosed, 4-acre facility. It would be “one of the smallest and most densely populated” locations for a compressor station in the country, the report found and posed an “unacceptable health risk for the surrounding community.”

A separate report by the group released in May found the compressor station posed significant risks of fire and explosion. The report noted that the station would compress gas in pipelines under as much as 250 times more pressure than in the 2018 Merrimack Valley pipeline explosions near Boston that killed one individual and left thousands without heat for several months.

Boston College’s Landrigan said the siting of the compressor station in Weymouth also raises issues of environmental justice for the surrounding communities, which he described as among the most economically depressed and “politically powerless” in the region. 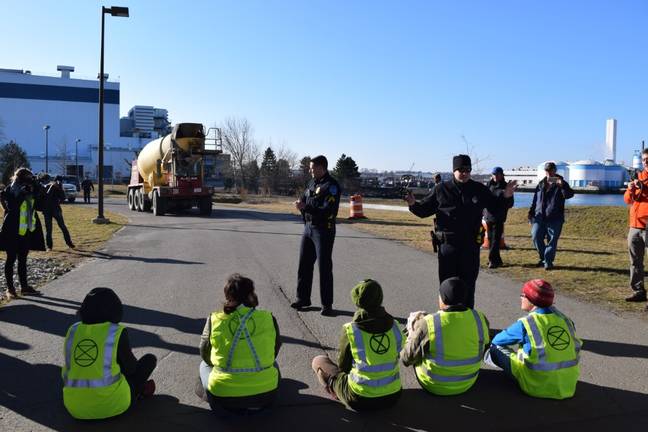 Activists sat in the path of a concrete truck to protest construction of a natural gas compressor outside of Boston near two low-income, environmental justice communities. Credit: Phil McKenna/InsideClimate News

The compressor station borders two neighborhoods of Quincy on the opposite shore of the Fore River that the state recognizes as “environmental justice” communities based on the percentage of the population considered minorities and at low income levels. One of the communities, known as Germantown, is primarily Asian with a large public housing building that sits directly across the river from where Enbridge is pouring concrete for its compressor station.

At least eight other existing fossil fuel and industrial facilities are located within a mile of where the compressor station is being built, including a gasoline and oil depot, a chemical plant, two power plants, a sewage pumping station and a hazardous waste transfer and treatment facility, according to the town of Weymouth, which opposes the project.

The state Department of Environmental Protection’s  air quality plan notes that state regulations require the agency to make environmental justice an “integral consideration in the implementation and enforcement of laws, regulations and policies.” The report adds, however, that because the project does not exceeds state thresholds for air, solid or hazardous waste, “the EJ policy is not applicable.”

Officials in nearby cities and towns have also spoken out against the project and its permitting, as have  Massachusetts Attorney General Maura Healey and U.S. Sens. Elizabeth Warren and Edward Markey. In October, Warren, a Democrat running for president, along with Markey introduced legislation that would block construction of any compressor station built as part of a pipeline project to export natural gas to Canada.

When it comes to federal action, however, local activists aren’t holding their breath. Instead, opponents of the compressor station continue to fight legal challenges against various permits for the compressor project, including the state’s air quality permit. It’s the same type of permit that was recently overturned for the Atlantic Coast Pipeline in Virginia due to health and environmental justice concerns in Union Hill.