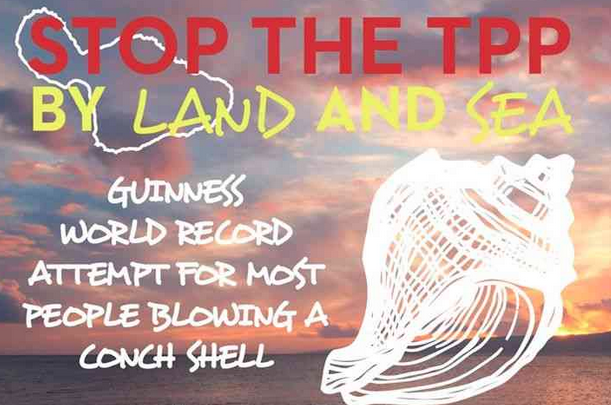 Protests To Stop TPP By Land And Sea

Coalition Of Advocates For The Environment, Labor, Health And Native Hawaiians Oppose The Trans-Pacific Partnership At Trade Talks On Maui

Hundreds of local residents and representatives from international advocacy groups are gathering on the shore of Kā‘anapali Coast to express their opposition to the Trans-Pacific Partnership (TPP) because it would sacrifice fundamental protections for public health, the environment, local jobs, and indigenous rights in order to enrich a few major corporations.

“The TPP is a threat to our sovereignty as Native Hawaiians, and as human beings,” said Kaleikoa Ka‘eo, professor of Hawaiian Studies at the University of Hawai‘i. “This secret trade agreement would allow corporations to control decisions about how we live without any accountability to us, the people of this land. We call on everyone who cares about the environment, public health, jobs, and basic human rights for Hawaiians and all people to join us on Wednesday for a gathering on Kā‘anapali Beach.”

Event participants are gathering at 12-noon for speeches, performances, and preparation for the world-record attempt later in the day. At 5 PM, participants will attempt to break the world record for the largest number of conch shell (pū) blown at one time.

“We chose the pū for this demonstration because in ancient times the sound of the pū was a call to attention; a kahea (call) to recognize something important is about to occur. Today is a call to attention, to join together against this attempt to put profits over people,” said Trinette Furtado, one of the event organizers. “This event calls attention to all struggles against entitled behavior across the globe. We send this kāhea of the pū out past this hotel and the secret TPP negotiations, and out into the ocean, through the mountains, around the world. People are awakening, discovering their power. They are hungry to effect a positive change in the world.”

Public opposition to the TPP continues to mount as awareness about the secret agreement grows. The Investor-State Dispute Settlement clause of the trade agreement would allow corporations to sue signatory countries for the loss of anticipated profits as a result of local laws established to protect the environment, food safety, public health, or human rights, among other things. In addition, the TPP would extend patent claims held by large pharmaceutical companies, making access to affordable generic medicines very difficult.

“Workers around the world recognize that the TPP will drive down wages, undermine living standards, and make it impossible to protect high quality, good paying jobs for local workers,” said Cade Watanabe of UniteHere! LOCAL 5, a union representing hotel and hospital workers in Hawai‘i. “It is out of respect for Hawai‘i’s land, its labor and its people, that we are standing up in opposition to the TPP.”

The TPP is a trade pact negotiated in secret between 12 nations around the Pacific Rim and 600 corporations. The 12 countries include: the United States, Australia, Brunei, Chile, Japan, Malaysia, New Zealand, Peru, Singapore, Vietnam, Canada, and Mexico. The list of corporations include: Walmart, Monsanto, Pfizer, Chevron, Exxon Mobil, and Dow Chemical.

“Hawai‘i is one of the most uniquely beautiful places on the planet. To protect this amazing natural beauty, Hawai’i has some of the strongest environmental laws on the planet. But if the TPP is adopted, these protections would be gutted,” said Marti Townsend, Sierra Club of Hawai‘i Director. “The TPP is a fundamental threat to our clean water, fresh air, and fruitful lands. It would set-back our progress on clean energy and do nothing to prevent environmental degradation across the Pacific region.”

“TPP negotiators cannot escape public scrutiny in Hawai‘i. These demonstrations in Lāhaina are part of a global movement of millions demanding transparency and speaking out against corporate favoritism,” explained Kaytee Ray-Riek, Campaigns Director at SumOfUs. “Journalists, activists, and voters are among the hundreds of thousands urging politicians to not sign this trade pact.”

“Highly secretive international agreements like the TPP will decimate our way of life in the islands by threatening Hawaiians’ rights to resources that allow for a subsistence lifestyle, crippling our local food economy, allowing higher levels of pesticides on crops and weakening the regulation of chemicals, lowering worker protections and opening the door for wider environmental and human rights abuses, and weakening food safety standards and food labeling requirements,” said Mary Lacques of Hawai‘i SEED.