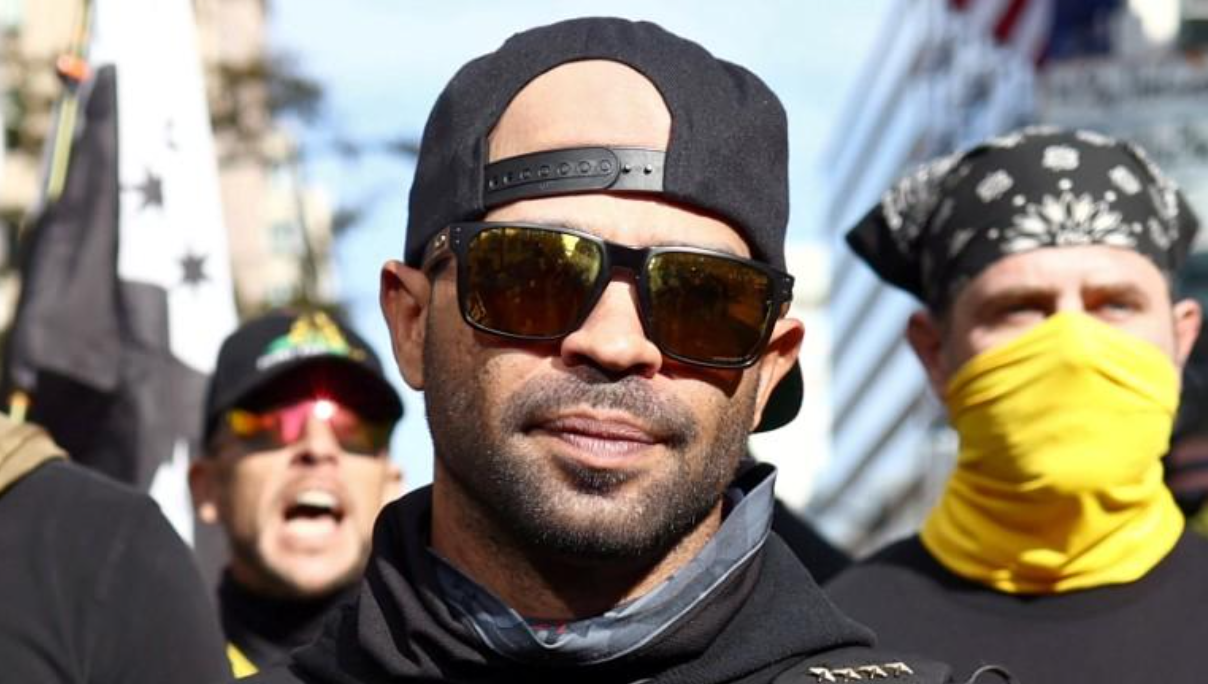 Above photo: Members of the far-right Proud Boys, including leader Enrique Tarrio (C), rally in support of President Trump to protest against the results of the 2020 U.S. presidential election, in Washington, November 14, 2020. Reuters/Hannah McKay.

NOTE: Popular Resistance objects to the characterization of anti-fascists as “often violent” in this article.

Washington, DC – Enrique Tarrio, the leader of the Proud Boys extremist group, has a past as an informer for federal and local law enforcement, repeatedly working undercover for investigators after he was arrested in 2012, according to a former prosecutor and a transcript of a 2014 federal court proceeding obtained by Reuters.

In the Miami hearing, a federal prosecutor, a Federal Bureau of Investigation agent and Tarrio’s own lawyer described his undercover work and said he had helped authorities prosecute more than a dozen people in various cases involving drugs, gambling and human smuggling.

Tarrio, in an interview with Reuters Tuesday, denied working undercover or cooperating in cases against others. “I don’t know any of this,” he said, when asked about the transcript. “I don’t recall any of this.”

Law-enforcement officials and the court transcript contradict Tarrio’s denial. In a statement to Reuters, the former federal prosecutor in Tarrio’s case, Vanessa Singh Johannes, confirmed that “he cooperated with local and federal law enforcement, to aid in the prosecution of those running other, separate criminal enterprises, ranging from running marijuana grow houses in Miami to operating pharmaceutical fraud schemes.”

Tarrio, 36, is a high-profile figure who organizes and leads the right-wing Proud Boys in their confrontations with those they believe to be Antifa, short for “anti-fascism,” an amorphous and often violent leftist movement. The Proud Boys were involved in the deadly insurrection at the Capitol January 6.

The records uncovered by Reuters are startling because they show that a leader of a far-right group now under intense scrutiny by law enforcement was previously an active collaborator with criminal investigators.

Washington police arrested Tarrio in early January when he arrived in the city two days before the Capitol Hill riot. He was charged with possessing two high-capacity rifle magazines, and burning a Black Lives Matter banner during a December demonstration by supporters of former President Donald Trump. The D.C. Superior Court ordered him to leave the city pending a court date in June.

Though Tarrio did not take part in the Capitol insurrection, at least five Proud Boys members have been charged in the riot. The FBI previously said Tarrio’s earlier arrest was an effort to preempt the events of January 6.

The transcript from 2014 shines a new light on Tarrio’s past connections to law enforcement. During the hearing, the prosecutor and Tarrio’s defense attorney asked a judge to reduce the prison sentence of Tarrio and two co-defendants. They had pleaded guilty in a fraud case related to the relabeling and sale of stolen diabetes test kits.

The prosecutor said Tarrio’s information had led to the prosecution of 13 people on federal charges in two separate cases, and had helped local authorities investigate a gambling ring.

Tarrio’s then-lawyer Jeffrey Feiler said in court that his client had worked undercover in numerous investigations, one involving the sale of anabolic steroids, another regarding “wholesale prescription narcotics” and a third targeting human smuggling. He said Tarrio helped police uncover three marijuana grow houses, and was a “prolific” cooperator.

In the smuggling case, Tarrio, “at his own risk, in an undercover role met and negotiated to pay $11,000 to members of that ring to bring in fictitious family members of his from another country,” the lawyer said in court.

In an interview, Feiler said he did not recall details about the case but added, “The information I provided to the court was based on information provided to me by law enforcement and the prosecutor.”

There is no evidence Tarrio has cooperated with authorities since then. In interviews with Reuters, however, he said that before rallies in various cities, he would let police departments know of the Proud Boys’ plans. It is unclear if this was actually the case. He said he stopped this coordination after December 12 because the D.C. police had cracked down on the group.

Tarrio on Tuesday acknowledged that his fraud sentence was reduced, from 30 months to 16 months, but insisted that leniency was provided only because he and his co-defendants helped investigators “clear up” questions about his own case. He said he never helped investigate others.

That comment contrasts with statements made in court by the prosecutor, his lawyer and the FBI. The judge in the case, Joan A. Lenard, said Tarrio “provided substantial assistance in the investigation and prosecution of other persons involved in criminal conduct.”

As Trump supporters challenged the Republican’s election loss in often violent demonstrations, Tarrio stood out for his swagger as he led crowds of mostly white Proud Boys in a series of confrontations and street brawls in Washington, D.C., Portland, Oregon, and elsewhere.

The Proud Boys, founded in 2016, began as a group protesting political correctness and perceived constraints on masculinity. It grew into a group with distinctive colors of yellow and black that embraced street fighting. In September their profile soared when Trump called on them to “Stand back and stand by.”

Tarrio, based in Miami, became the national chairman of the group in 2018.

In November and December, Tarrio led the Proud Boys through the streets of D.C. after Trump’s loss. Video shows him on December 11 with a bullhorn in front of a large crowd. “To the parasites both in Congress, and in that stolen White House,” he said. “You want a war, you got one!” The crowd roared. The next day Tarrio burned the BLM banner.

Former prosecutor Johannes said she was surprised that the defendant she prosecuted for fraud is now a key player in the violent movement that sought to halt the certification of President Joe Biden.