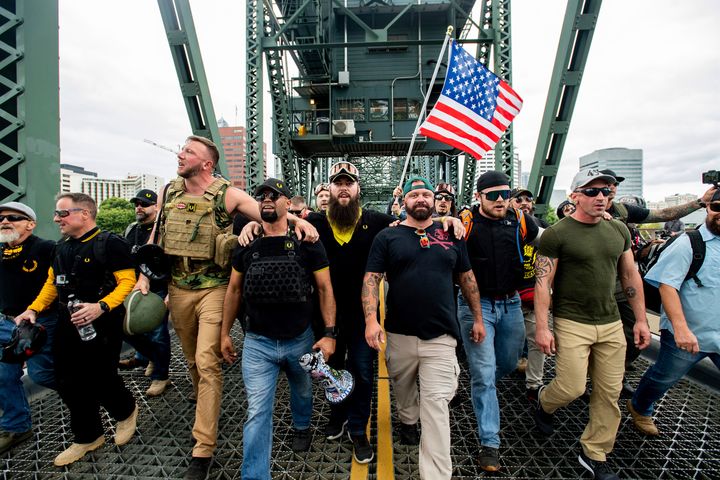 Above Photo: ASSOCIATED PRESS. Proud Boys and other fascists march across the Hawthorne Bridge on Saturday.

Many had feared the rally in Portland would be the most violent fascist rally of the Trump era.

PORTLAND, Ore. ― A few hundred fascists once again invaded Portland for a much-anticipated rally Saturday, but this time were mostly deprived of the violent spectacle they crave, as a much larger group of anti-fascists made them know they weren’t welcome in this city.

The fascists belonged to far-right groups including the Proud Boys, Patriot Prayer and the Three Percenters. And whereas at previous Portland rallies these groups have often confronted and attacked anti-fascist protesters, this time they were barely given the chance to do so. Upon arriving at Tom McCall Waterfront Park around 11.am. Saturday, they were kept separated from their foes by concrete barriers and a phalanx of police.

The fascists ambled about, singing the national anthem and chanting “USA” for a mere 30 minutes before deciding it was time to leave. An accommodating Portland Police Bureau — which has been criticized for siding with, and sometimes maintaining friendly relationships with, such far-right extremists — then escorted them to the Hawthorne Bridge, which was closed off to the rest of the city’s residents, for a happy march across the Willamette River.

It was a striking scene: the same group of out-of-town fascists that have terrorized people here for years, given free rein over a city bridge, on their way back from an unpermitted rally in a public park, after weeks of threatening to harm and kill local anti-fascists.

But the police department’s decision nevertheless may have prevented bloodshed, as it largely stopped fascists from crossing paths with their enemies. (“We did not show preferential treatment, but rather facilitated a de-escalation of potential conflict,” Police Chief Danielle Outlaw later argued.)

There were concerns, after all, that this rally would be Portland’s most violent since President Donald Trump took office. Portland officials have for years allowed the Proud Boys and their buddies in the Washington state-based extremist faction Patriot Prayer to hold “free speech” gatherings here that have served as nothing more than thinly veiled excuses to fight leftists in the city’s streets.

But the messaging leading up to this particular rally carried an air of vengeance. Proud Boys billed it as direct action against anti-fascists in response to an incident at a June rally that left far-right blogger Andy Ngo with a black eye. Although bloodied faces have become the norm at these rallies, Ngo’s injuries quickly made him into a cause celebre among the far right, which is eager to depict anti-fascism as a violent movement worthy of government repression.

Early Saturday morning before the rally, the Proud Boys received a big endorsement for their cause. “Major consideration is being given to naming ANTIFA an ‘ORGANIZATION OF TERROR,’” the president tweeted. “Portland is being watched very closely. Hopefully the Mayor will be able to properly do his job!”

“Antifa” is a blanket term that refers to a decentralized network of leftist, anti-fascist organizations, some of whose members wear masks and dress in all black at political rallies. Hours after the president’s tweet, over a thousand anti-fascist protesters gathered in Tom McCall Waterfront Park to hold a rally of their own.

One of their stated goals ahead of the rally was to destigmatize the word “antifa” itself, which right-wing figures and media outlets like Fox News have turned into a scare word.

Popular Mobilization (or PopMob), a coalition of leftist groups that organized the counterprotest, distributed flyers in Portland this week that stated: “If you oppose racism, white supremacy, homophobia, transphobia, misogyny, Islamophobia, anti-Semitism, and the xenophobic, ultranationalist ideologies of the far right (and our current administration), you are an EVERYDAY ANTIFASCIST.”

“If you are not a fascist — then you are Antifa,” it continued.

One anti-fascist in the crowd Saturday was a 47-year-old office administrator named Shane. He held a sign reading “Say Her Name” next to a photo of Heather Heyer, the counterprotester murdered by a neo-Nazi at 2017’s “Unite The Right” rally in Charlottesville, Virginia.

“If we ignore fascism, it emboldens fascism, and we must confront fascism with all necessary force, even if that just means showing up and saying, ‘You’re not welcome here,’” Shane told HuffPost.

As the Proud Boys and other far-right groups marched across the Hawthorne Bridge, Proud Boys leader and former Infowars conspiracy theorist Joe Biggs — who in recent weeks made explicit calls to violence against anti-fascists — threatened to come back to Portland again.

Not until Mayor Ted Wheeler rids this city of antifa, the Florida-based Biggs told his followers, would the Proud Boys stop coming to Portland.

When Biggs and his crew finally exited the bridge onto the east side of Portland, they were greeted warmly by members of the American Guard, a group the Anti-Defamation League has described as “hardcore white supremacists.” The Proud Boys returned the love, shaking hands with and chatting with the American Guard members.

And here are the Proud Boys warmly greeting members of the American Guard after exiting the bridge into the east side of #Portland pic.twitter.com/eBos6Ddwjn

They all then posed for a group photo. “Four more years!” they chanted in support of Trump.

Eventually they all dispersed. Some in cars and buses, others on foot. As they scattered across the city, HuffPost reporters witnessed isolated, intermittent confrontations and flashes of violence.

As a lightly armored school bus carrying smack-talking American Guard members passed by some anti-fascists, video appears to show a guardsman charging out of the bus with a hammer. An anti-fascist snatched the hammer from the man’s hands.

In the ensuing melee, HuffPost witnessed anti-fascists break some windows on the bus.

At another point in the day, John Turano — a Portland rally regular who dresses in gladiator gear specifically to fight anti-fascists — repeatedly swung at protesters despite being overwhelmingly outnumbered, and was shoved to the ground and then chased away by the screaming crowd.

Patriot Prayer leader Joey Gibson — who is among six right-wingers arrested this month for their roles in past Portland riots — strolled slowly around Old Town as anti-fascist protesters followed, chanting “Nazis go home!”

At one point, when Gibson stopped to speak to a crowd of people, a woman parked on a nearby motorcycle repeatedly revved her engine in an attempt to drown out Gibson’s voice. Police rushed the woman, and when she refused to stop revving her engine, ripped her from the bike and cuffed her.

Eventually, Gibson hopped into a friend’s Subaru and drove away.

Throughout the afternoon, Portland police, as is their wont, chased anti-fascists around town, at various points ordering the activists off the streets. “Whose streets? Our streets!” the protesters chanted back. (Police said they arrested 13 people on Saturday, though it’s unclear how many of those arrested were anti-fascists.)

Whatever videos the Proud Boys might post from the day’s events, there’d be, for example, an anti-fascist dressed as a poop emoji in the background.

“The social pressure and evolving diverse and incredibly fun tactics of PopMob; the seriousness of the Portland Police; and the number of city, civic and business leaders mobilized seems to have taken serious steam out of the white nationalist/alt-right protest,” Eric Ward, executive director at the Western States Center, a Portland-based civil rights group, wrote in a statement Saturday evening.

“You are an amazing community Portland and you showed up this month and it mattered,” Ward continued. “Community and leadership made this happen and you showed up with a lot of both. Goodnight from the Rose City.”