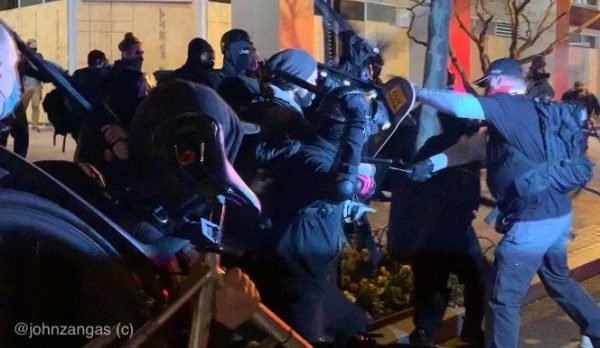 Proud Boys Vandalize Churches And Clash With Antifascists In DC

Above photo: Antifascists clash with Proud Boy hate group in DC. Many were injured in hand-to hand conflict. John Zangas.

Trump flew in his Air Force helicopter over the MAGA Freedom Plaza rally multiple times before departing for the Army-Navy game. His fly-over egged on the MAGA crowd and fueled their suspicion that he was victim of a rigged election wrought with mailed ballot fraud, ballot theft, and fake signature balloting, resulting in his defeat.

Earlier it was reported that the leader of Proud Boys had been to the White House for a tour. Typically such visits require vetted credentialing before admission is permitted.

After the rally at Freedom Plaza, Proud Boy groups marched downtown towards Black Lives Matter Plaza. And as night fell more Proud Boys poured from area hotels they had booked and brought with them a wave of violence to the streets. They were easily identified by their yellow and black clothing and slogans written on them.

Proud Boys tore down a Black Lives Matter sign attached to the grounds of Asbury United Methodist Church at 11th K Streets, and burned it in the street. Senior Reverend Ianther Mills responded to the vandalism in a letter published early Sunday morning. “For me it was reminiscent of cross burnings. Sadly we must point out that if this had been a group of men of color marauding through the streets and destroying property, they would have been followed and arrested,” she wrote.

The Asbury United Methodist Church has been in existence since before the Civil War and has served as a node of resistance to racism since it was founded 184 years ago.

Another church, African Methodist Episcopal Church, located at 15th and M Streets NW, was also vandalized when its Black Lives Matter sign was torn down by Proud Boys. It was the church that held the funeral of Frederick Douglas, whose home was in Anacostia, MD.

Dr. Cornell William Brooks, a member of Metropolitan African Methodist Episcopal Church, wrote on Twitter, “On my Sabbath I wake up to the disgusting image of Proud Boys tearing down a Black Lives Matter banner from my church. Will Trump who held a bible up in front of a church bless not condemn this racist vandalism against Metropolitan AME church?”

Religous leaders responded with support to the congregations of those churches vandalized, condemning actions of Proud Boys and demanding the Trump Administration also condemn it.

Luther Place, a third church vandalized, which supported the Civil Rights movement and Peace movement of the 1960s and 1970s, was also attacked on Friday night when its Black Lives Matter sign was torn down. Saturday night several supporters affiliated with Luther Place stood guard near a Black Lives Matter sign replacement under its head steeple. It is not known who was responsible for the vandalism at Luther Place on Friday night.

For their part police stood in lines to separate the clashing groups but their tactical positions were primarily bureaucratic. In many instances groups of Proud Boys easily broke through lines by flanking police lines through alleyways. Then Proud Boys sought out anti-fascist opposition by attacking through those alleys. And even where police lines faltered, groups clashed and fought hand-to-hand while police were observed making no arrests at those particular points of conflict.The violence continued unabated for hours in multiple locations throughout downtown. Four were reportedly stabbed and in serious condition at hospital. There were 23 arrests throughout the night. Many others were beaten and injured. Proud Boys confronted and attacked small groups caught out in the open.

At one point on 14th and K Street, just a few hundred feet from the Washington Post building, Proud Boys pushed past police bicycle lines and poured onto K Street to fight with an anti-fascist counter group. For unexplained reasons police made no arrests at that site of confrontation.

The Proud Boy hate group is new but their violence is not new in this country. It is a twist of roots to white supremacy with hoods off in the form of a gang. The Proud Boys were founded in 2016 and involved in the riots of Charlottesville in 2017. They have shown up for hate rallies in New York, Portland, Olympia, and Boston. They are classified as a hate group by Southern Poverty Law Center. They are tracked by groups such as One People’s Project, a group that specializes in tracking hate groups.

Daryl Lamont Jenkins, founder of One People’s Project said that the Proud Boys played themself out Saturday night when they attacked historic churches and harmed random people on the streets. “There’s going to be a reckoning over this. When you take down and burn the Black Lives Matter banner from the church where Frederick Douglas had his funeral thats going to be a big problem,” he said.

Jenkins, who was in Washington DC to observe the MAGA groups and Proud Boys as part of his work said also that police were forced to react to the mayhem Proud Boys brought to DC after the November MAGA rally. He still gave police a “D-minus” rating for allowing the sustained violence and damage to chruches in downtown DC.

Mainstream media was not visible during the clashes and did not video record these incidents. Independent media coverage was continuous and immediately posted to social media.

There is certain to be backlash over the Proud Boy vandalism at Washington DC area churches. We will update this story as developments are learned.